Leave It To The Lords

Gavaskar once came to Lord's without any papers and it was a long time before he could make it past the ever-watchful guards. What's more, he was one of the playing eleven. 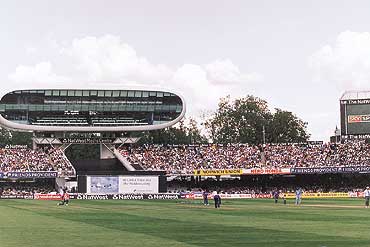 outlookindia.com
-0001-11-30T00:00:00+0553
The eleven members of the Indian squad playing the first Test have experienced one of the greatest moments in any cricketer's career. And those who were not on the team bus know very well what they are missing—the thrill of playing in a Lord's Test.

I might be a little biased because I played much of my cricket with Lord's as my home ground. But despite having the privilege of going to all the great Test venues in the world, I can think of no other ground with such a special atmosphere. It is there for you to savour right from the time you arrive at what is generally referred to as the headquarters of cricket. It does not matter how many times you play there, the whole feeling about the place is unique. Most of the Indians in the present squad will have played there before, some of them as recently as the final of the NatWest Series. But Test matches at Lord's are different—the buzz of anticipation, and the air of grandeur, is unmatchable.

Indian cricketers will surely savour it all—provided they are allowed in. The great Sunil Gavaskar once arrived at the ground without the necessary accreditation and it was a long time before he could get past the ever-watchful gatekeepers. He was playing in the match! Things have improved since then—nowadays they are much more friendly on the gate. But they are still the epitome of efficiency and will not let anybody in without a ticket. No excuses of urgent messages for Sachin Tendulkar will help you past the gate. It is just that they will keep you out in a more civilised manner now.

Everybody loves to score runs or claim wickets at this special venue. It's as if Lord's inspires the players to lift the level of their game a couple of notches above the ordinary. Perhaps, more than any other place, everybody wants to find a mention in the honours board in the visitors' dressing room. It is a list of all overseas batsmen who've scored a century or bowlers who have claimed five wickets in a Test innings at this venue. When players walk into the spacious, slightly antiquated dressing rooms at Lord's, there's an urge to emulate the heroics of some of the great names in cricket and be immortalised in the annals of the game.

There is usually a full house for a Test match. At a capacity of 30,000, it is small compared to Eden Gardens or Wankhede, but it is a different atmosphere and just as intimidating or inspiring. There is a refined, civilised aura about a Test at Lord's.

And then comes a moment when you have to go out to bat. It's a long walk to the pitch and there's no time to dwell on the previous dismissal. There is a little down-slope from the gate near the pavilion, as if throwing the batsman forward, which is why so many appear eager to reach the middle. Of course, if you are out quickly, you have enough time to reflect on your innings, especially if the walk is longer than the time you spent in the middle. Then, as you go through the Long Room, there is a respectful silence. It is as if the members join in the grieving for your dismissal.

When David Steele first played for England in a Test at Lord's in 1975, it was his first time in the home dressing room. As a county player, he was always in the away quarters at the other end of the building. When it was his turn to go out to bat, he went out of the dressing room, down the stairs, but, instead of going out to the playing area, he found himself down in the basement in the gents' toilets. He had gone down one flight too many.

At one time, the catering for the players was done by the legendary Nancy Doyle. I am sure I would have been as slim as a pencil had it not been for the food she produced. It's equally good now under the watchful eyes of Linda and Catherine who appreciate the special dietary requirements of modern athletes.I suppose Nancy used to appreciate my special dietary requirements as well! There is always a choice of meals, and the Indians must have relished the curry and vegetarian dishes on offer.

Lord's has certain standards to maintain, and that is what makes it special. It adds to the special atmosphere and the officials are keen to extend their hospitality so that visiting players enjoy their stay and go back with fond memories. My only complaint during my time as England captain was that visiting teams were sometimes made to feel too welcome. I skippered England twice in Tests on the ground and, as well as I knew all its foibles, could not once engineer a victory.

Now, For A Palace Coup