RIL finds it real value at the special trading session 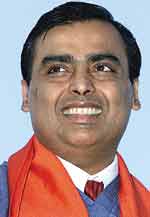 It was a unique day in the history of Indian bourses. At 8 am last Wednesday, a one-hour special trading session took place to decide the value of Reliance Industries Ltd (RIL) after elder brother Mukesh Ambani had transferred RIL's holdings in group firms like Reliance Energy and Reliance Infocomm to Anil. Ever since June '05, when the Ambani brothers reached an agreement to split, analysts had gone to town predicting the future of the RIL scrip. It was time to see if their predictions would turn out to be true. It did, as the stock which had closed at Rs 928.15 the previous day performed in line with expectations. Over 9 crore RIL shares were traded on the BSE and the NSE as the scrip closed at Rs 693.85 at the end of the day's trading session.

Although there was excitement among most investors, some of them were slightly concerned. "We've got shares that are not going to be traded for sometime and that have never been traded before," says an RIL investor commenting on the fact that the shareholders have been proportionately allotted shares in Anil-owned firms where RIL was earlier a substantial shareholder. Based on the valuation, the weightage of the scrip on the 30-stock Sensex was down to 9.46 from 12.20 per cent. Anil welcomed the shareholders in a written statement which said that the demerger had added Rs 55,000 crore to investors' wealth since June '05. He added that a demerged RIL was 15 per cent higher in terms of market capitalisation.