Female bodybuilding is no ‘flesh’ in the pan 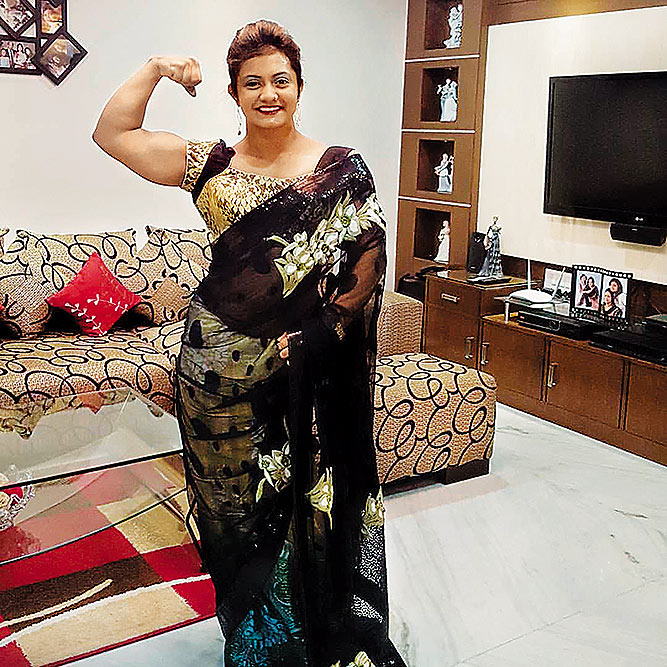 As for her name, it’s from Samco Europa, the merchant vessel her father was captaining when she was born. 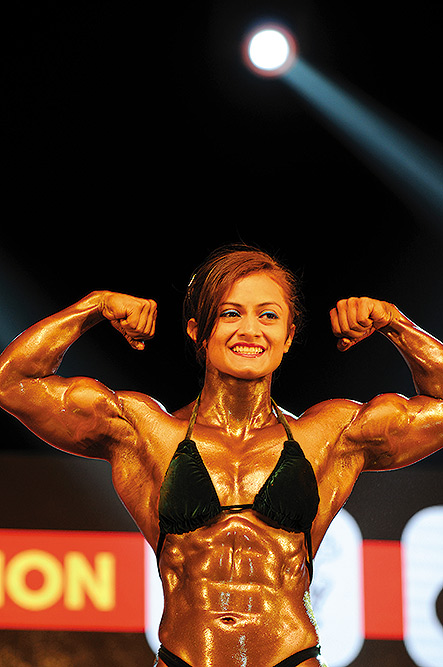 She is 19, from Calcutta and barely crosses 5 feet standing on her toes. She was “chubby” around the time she reached puberty and was bullied in school for being “short and unattractive”. So she tried dieting and became anorexic. That was before her parents asked her to hit the gym. And the gym is where “the youngest competitive female bodybuilder in India” regained her confidence.
Photograph by Getty Images 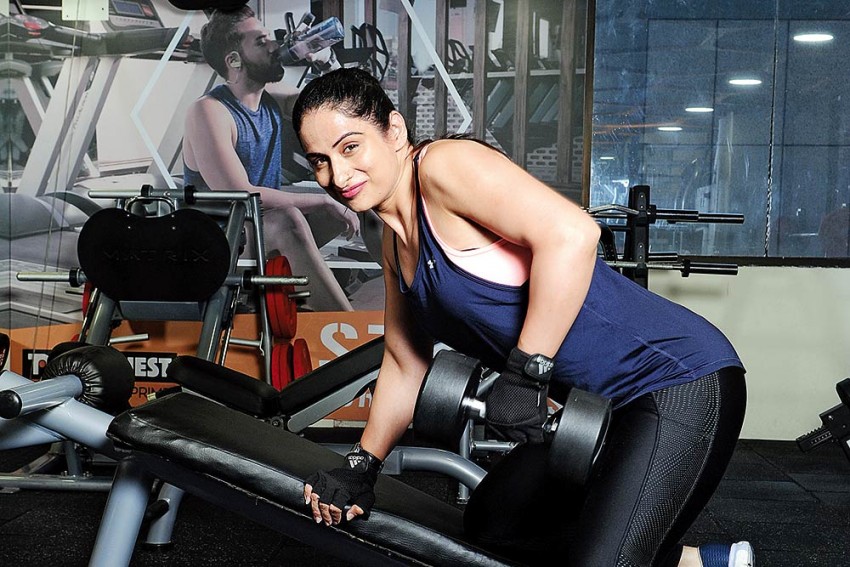 She has competed in international contests and won laurels too. “Everybody in my family is supportive, including my in-laws.”
Photograph by Jitender Gupta 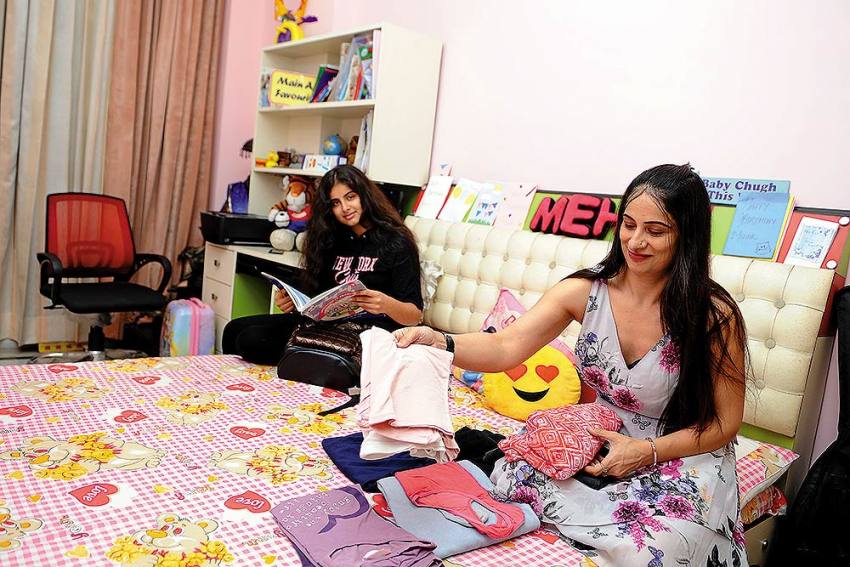 She is 37, married, and mother of a 12-year-old daughter. This Delhi woman was an English schoolteacher for 12 years before becoming a professional bodybuilder and a health columnist.
Photograph by Jitender Gupta 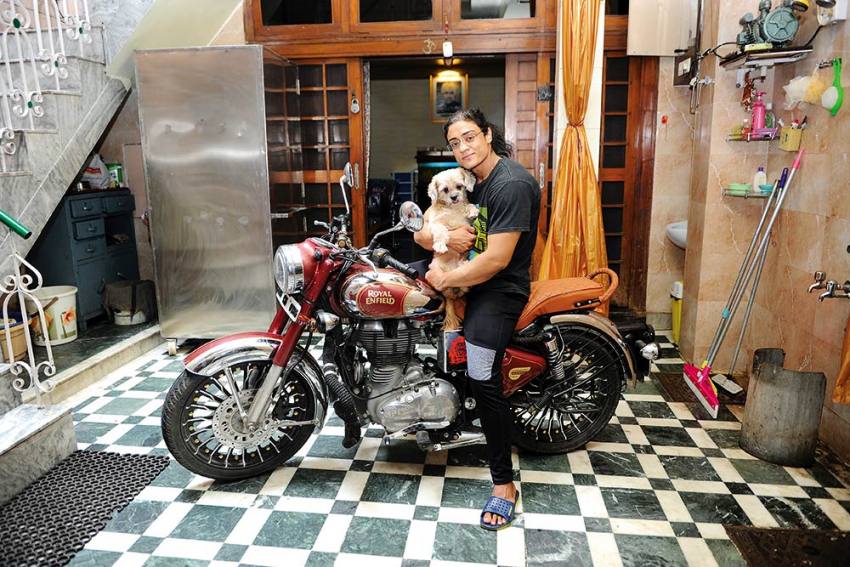 I was always overweight. I was 21 and my heart sank when I saw my weight on the weighing scale. It was 108kg.” She quit her job, that of a 3-D animation artist, to go professional.
Photograph by Jitender Gupta 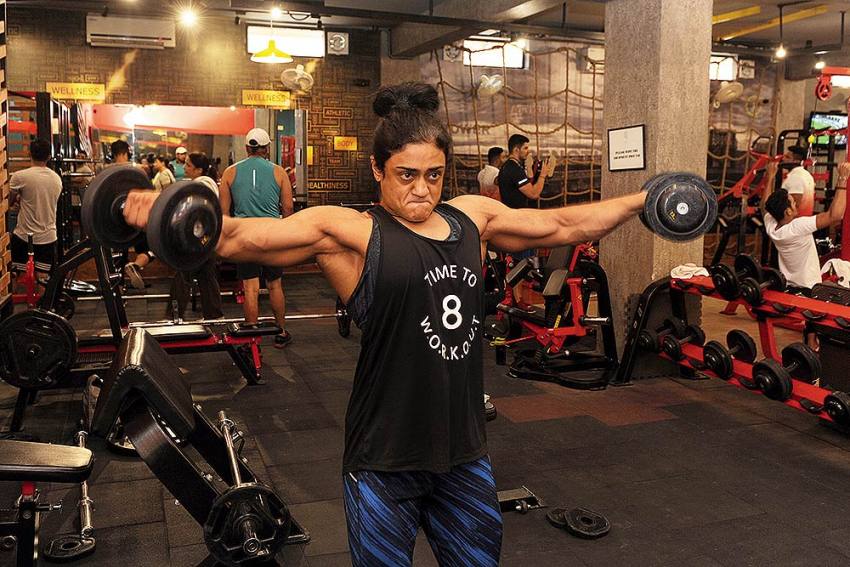 Geeta Saini, 30, Gurgaon. Her parents were the first to object when she started professional bodybuilding two years ago. “For me bodybuilding started as a way of getting fit.
Photograph by Jitender Gupta 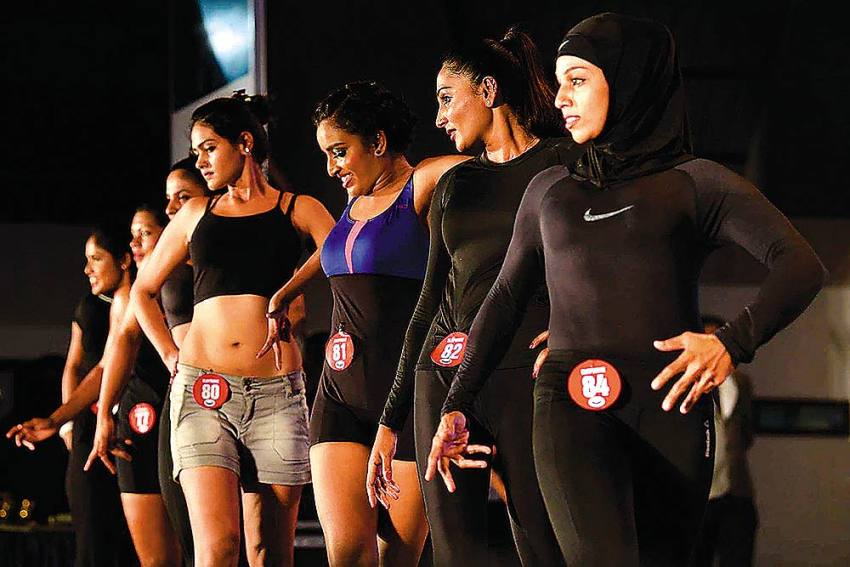 Her choice of sport, which demands showing her physique, has not had any conflict with her religious propriety. “My identity is my hijab. Being a girl or a Muslim doesn’t matter. I want women to take up all challenges,” says the dental surgery student who transitioned from powerlifting to bodybuilding encouraged by her husband. 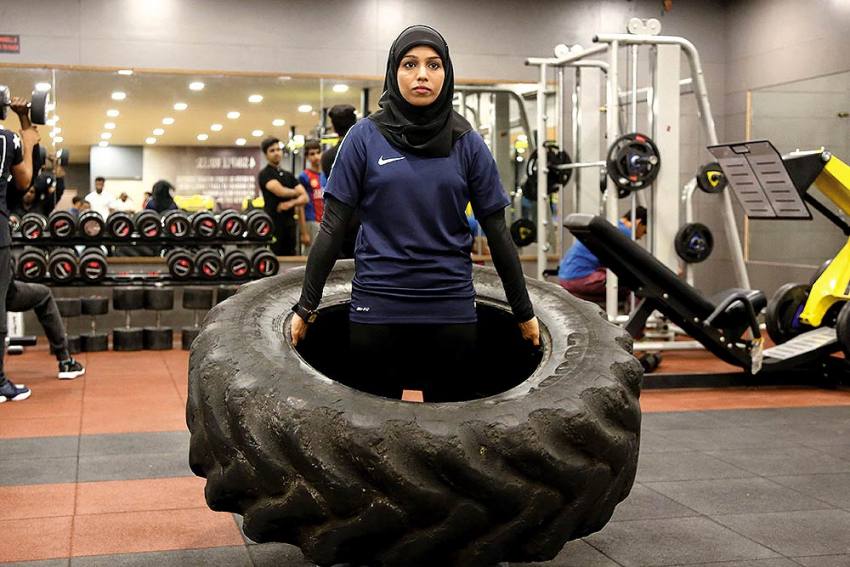 This 24-year-old from Orkatteri, a village in Kerala’s Kozhikode district, flexes here muscles in a burkini. 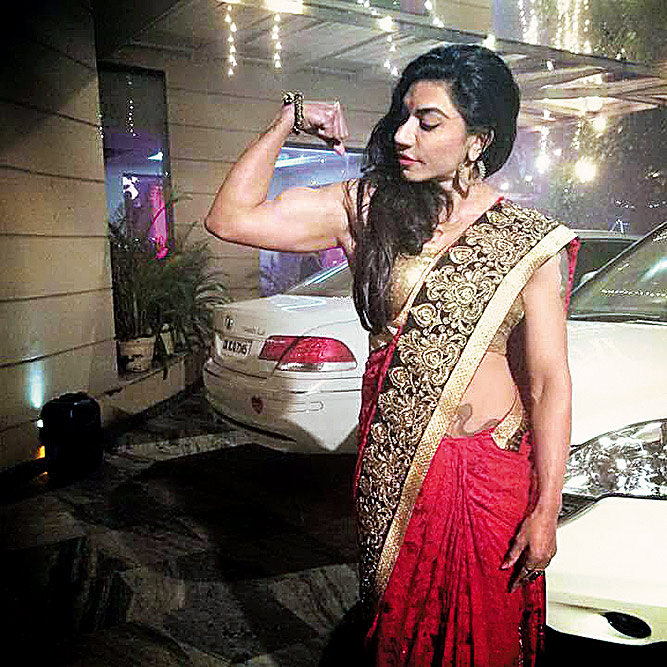 An avid biker who swears by her Royal Enfield and a dancer-choreographer. She took to bodybuilding at age 17 to break social taboos and a difficult childhood: bullying in school for being overweight because of an ailment. She has won several bodybuilding titles. 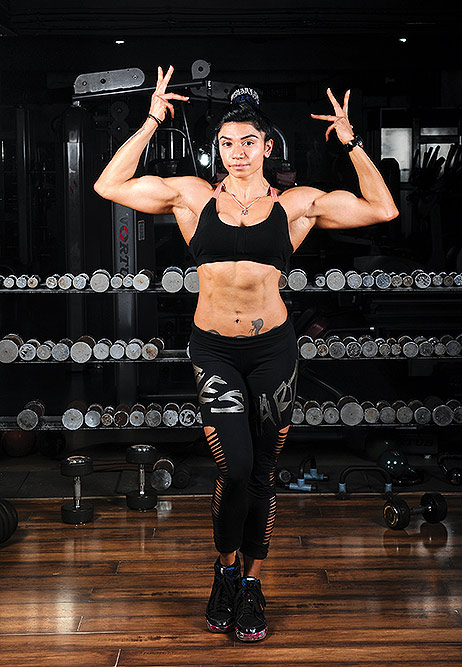 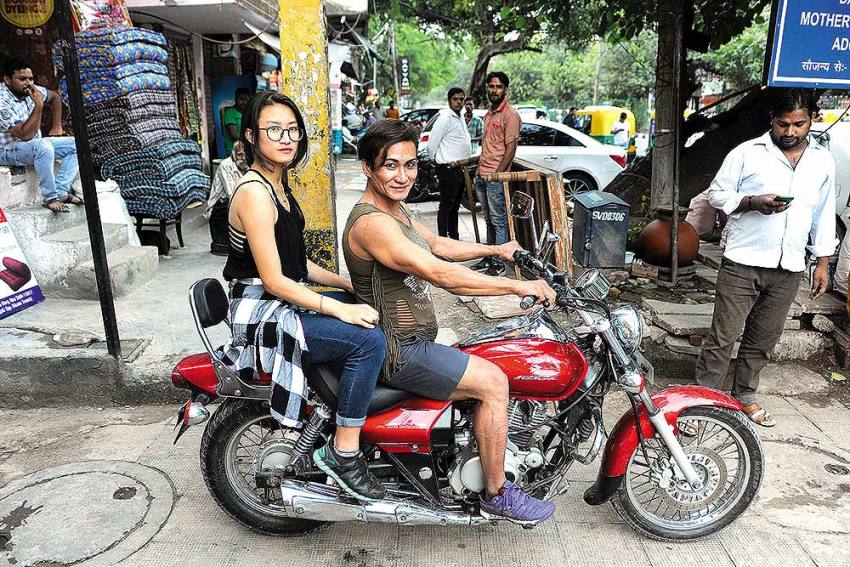 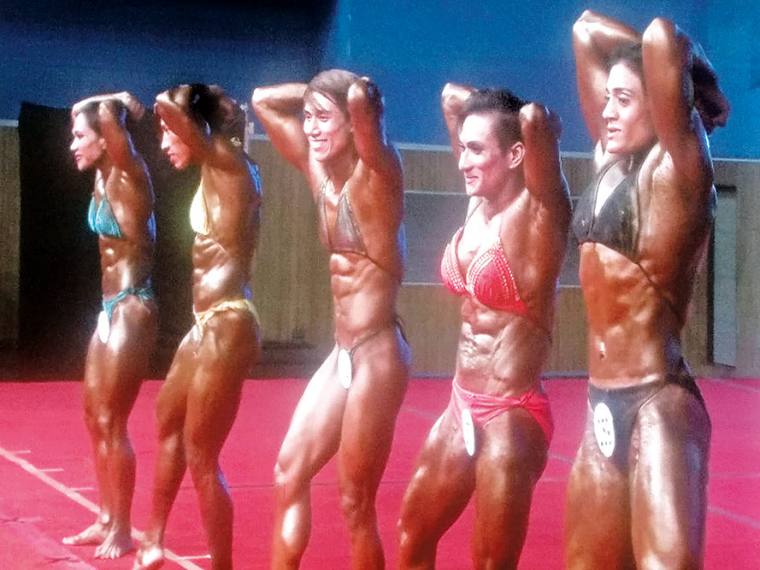 Mamota won gold at the 52nd Asian championships on October 7 in Pune. 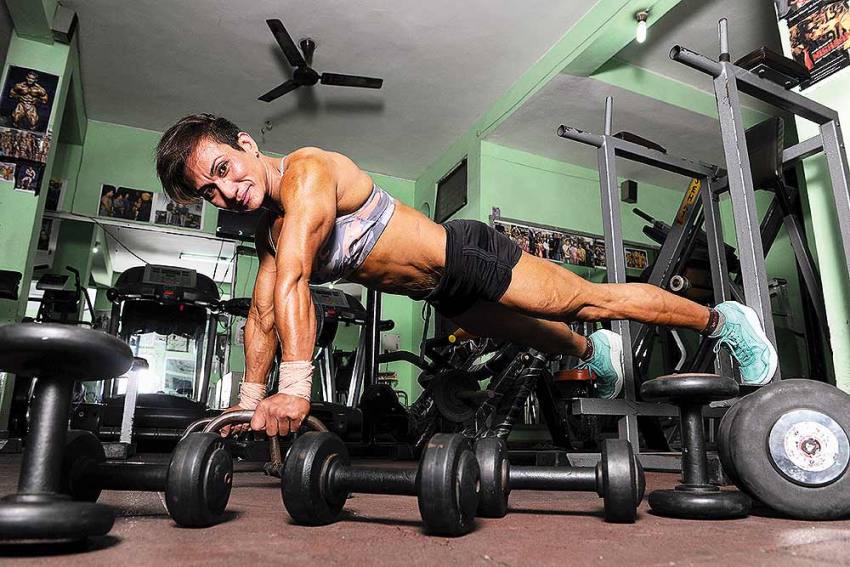 She is 39, a mother of three and the wife of a bodybuilder-husband. They are from Manipur and born in a society not known to accord any social stigma to women in sports, even bodybuilding. Mamota was a petite woman with flawless skin when she landed in Delhi 17 years ago and started working for cosmetic major Avon. She became a full-time bodybuilder after “my husband’s failure in a championship in 2011”. Back-to-back bronze in Bangkok (2012) and Vietnam (2013) put her on the world stage.
Photograph by Jitender Gupta
Lachmi Deb Roy October 17, 2018 00:00 IST League Of Ms Muscles

Flower power, 1970s—the fight raged for women’s rights and for freedom from the chokehold of male chauvinism. The churning happened in all preserves considered male, including the musculature pursuit of bodybuilding. Women began pursuing the art of shaping the body with deadlifts and squats. Another male dominion was conquered. Women with ripped muscles, grease-tanned wide shoulders, bulging biceps, flaring lats, and shredded thighs tapering down from a small waist competed in major bodybuilding events. It took some time, but Indian women too got into the act.

But the chiseled female silhouette never found widespread acceptance from a patriarchal society steeped in the idea that women with too much muscles are unattractive and gross. Some called them androgynous, man-face, and someone simply asked if one could tell they were a woman. All negative adjectives. “I got three words for female bodybuilders, ew, yuck & don’t!” screams a tweet, reprising the stereotype. Yet, female bodybuilding is flourishing in India and abroad. Mother-of-three Mamota, teenager Europa, schoolteacher Jinnie and many of their ilk are the beacons…