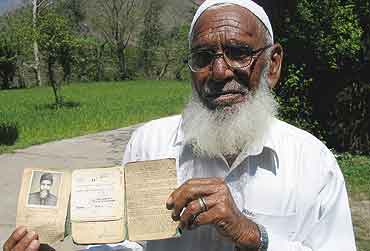 outlookindia.com
-0001-11-30T00:00:00+0553
When the bus to Srinagar skirted around Majhoi village, 23 km from Muzaffarabad, a bearded, 90-year-old man stood waving at the passengers on the historic journey across the LoC. His name: Ghulam Hussain Shah, the man who drove the last bus across the LoC way back in 1947.

When Outlook met Shah four days before the bus was flagged off, he'd stood in the courtyard of his house and spoken of the cataclysmic changes which divided a people and their land. "I'm happy over the reopening of the road after six decades," he said, puffing at his cigarette with the touching insouciance of a nonagenarian.

It's the road whose every curve and bend is known to Shah, who began driving on it in 1939. In 1947, he was steering what he calls the dak (mail) bus which would also take on board passengers wishing to travel from Srinagar to Muzaffarabad—and beyond. "Under the law, we couldn't drive at night. Uri used to be our night halt," he said.

Shah had been living in Srinagar for 12 years before Partition; three of his six children were in fact born there. But he decided to evacuate the family on his own Rawalpindi-bound bus in anticipation of the invasion by the tribals. "One Mr Patil had booked some seats; he pulled out at the 11th hour. I instantly decided to take the seats and evacuate my family." With time for departure ticking, Shah didn't even allow his wife to pack their belongings. Later that night in Rawalpindi, he was told the tribals had attacked Kashmir.

The following day, some people wanting to participate in the war against the Maharaja booked his vehicle for Srinagar. The journey began at night because "Indian planes would hit every moving object in daylight". At Pattan, however, they were told Indian troops had counter-attacked. "We decided to return to Baramulla," Shah remembered. "There my clients took over the vehicle and left me behind." Shah hitched rides on trucks to Majhoi village, where he began a new life.

Shah didn't apply to travel to Srinagar. "Who will I meet there? Most of my friends, Muslims and Hindus, would be dead by now," he said. "But if the government allows me to visit Srinagar with any of my grandsons, it'll be a nice gesture."