Seemingly defying all odds, Kingfisher continues to fly. While this has naturally generated controversy, it has also raised many relevant questions about the way we do business in India. 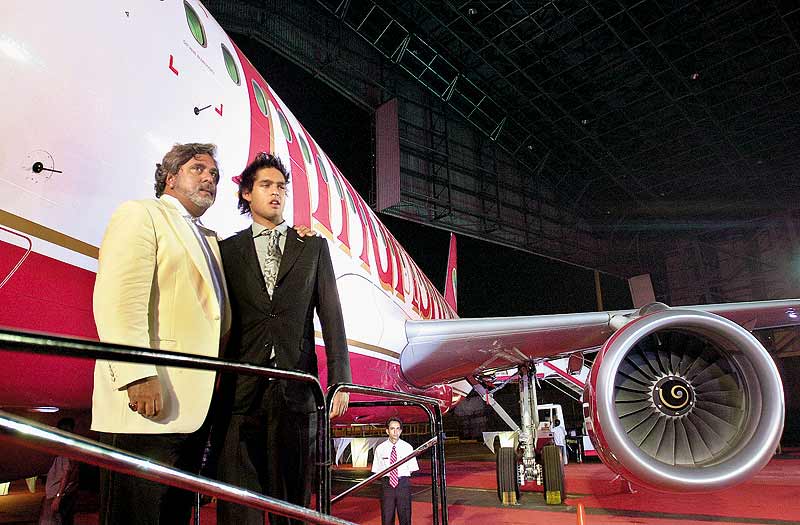 There has been so much bad news around Kingfisher Airlines in recent months that it would not be surprising if most consumers assume its end is near. But then, seemingly defying all odds, Kingfisher continues to fly. While this has naturally generated controversy, it has also raised many relevant questions about the way we do business in India. Outlook seeks some answers:

1. Kingfisher Airlines’ woes appear to be insurmountable. How much longer does it have before it completely shuts down?

Given its cash flow issues, truncated operations, repossessed planes, losses of over Rs 1,100 crore in the last quarter, frozen bank accounts, unpaid and striking employees, most experts agree it’s simply a matter of time before the airline shuts shop. Aviation industry sources feel that Kingfisher will continue to survive in bare-bone mode till it is forced to cease operations. Actually, the verdict is divided among experts. Either the airline will last for another two quarters. Or it will continue with minimal operations, using say 5-10 aircraft, enough to hold on to its Scheduled Operator Permit. Whatever the scenario, the future is bleak, nay, hopeless.

Yes, Mallya isn’t an easy man to work with. Many of his former associates say he can be eccentric to the point of being unprofessional, but they all agree he will hang on till the very end. “Mallya is not likely to voluntarily take the decision to shut it down,” says a Kingfisher employee. It suits him to stay afloat and in the game with a running airline. The government’s reluctance to take matters head on has led to this strange impasse, borne out by Kingfisher’s bankers. “In a sense we have been backed into a corner. We have no bargaining chip left. We are waiting for them (Kingfisher) to tell us where they are heading and they are waiting to see what our next move is likely to be,” a senior public sector bank official says, on condition of anonymity.

3. But given that Kingfisher’s debt is at a whopping Rs 7,500 crore, why are its bankers not being more aggressive?

The banks are more or less resigned to a huge loss from Kingfisher. Since there are no underlying assets to speak of, expect a long process of litigation in a bid to try and regain some—very little, actually—money. The value of the ‘collateral’ from Mallya’s promoter holding (35.86 per cent) in Kingfisher is not likely to yield more than Rs 300 crore at current market prices. Coupled with Mallya’s non-core assets, properties and helicopters, he will serve up another Rs 500 crore at most. In short, the bankers have no chance in hell of recovering all their money. Recently, ICICI Bank—one of the larger private sector lenders—sold its debt of Rs 430 crore to a fund managed by Srei Infrastructure.

4. What explains the reluctance of the government to act?

“There is too much at stake for the government to let it collapse,” says Ramesh Vaidyanathan, partner at Advaya Legal, which does work in the aviation sector. Vaidyanathan is referring to the 4,000-odd employees on Kingfisher’s rolls, many of whom have not received salaries for months now. If the airline does indeed shut down, it’s going to raise many uncomfortable questions. There has been no move to try and reclaim dues from the airline on behalf of the banks. “If the ministry puts enough pressure and gives the banks the go ahead, the recovery process can be initiated,” says a former banker. However, banking and finance industry watchers say that one of the reasons that this is not being done is because it will open up a can of worms. “How were the banks allowed to give out so much credit to an airline that was continuously showing losses? Why has public money gone towards a faulty business model? These are not questions either the banks or the government want to answer,” says a top aviation industry source.

5. Was director general of civil aviation (DGCA) head E.K. Bharat Bhushan shunted out due to his tough stand on Kingfisher?

The government might claim that it was because of a “bureaucratic goof-up”, but industry and official sources seem to confirm the buzz that has been going around: that Bhushan’s removal from the post had a strong link to his posture on Kingfisher. Bhushan’s sacking came within 24 hours of his making a noting on a file to serve notice to the ailing airline. The note warned of the termination of Kingfisher’s operating licence if the salaries and other employee dues, which have been pending since February, were not cleared immediately. While Bhushan’s critics accuse him of being slow to act on the financial surveillance and audit of Kingfisher, which he had ordered six months ago, his supporters claim that an RTI would reveal that while following the set rules and procedures, operational security concerns were continually being looked at. The bottomline: Kingfisher continues to fly, watched over by a benevolent government. “If Mallya wants to continue with operations—which he has done after twice cutting down scheduled operations—how he does it is the DGCA’s problem,” says a top aviation ministry source.

6. What rescue options does Mallya have, really? Is his United Breweries (UB) under threat?

Mallya is banking on being able to garner funds through FDI in domestic airlines. But even if FDI is allowed, it won’t do much to save the airline. “Theoretically, it is possible to turn around Kingfisher, but very difficult practically. Kingfisher’s promoters continue to feed the airline because its closure will have a massive impact on the UB group,” says Kapil Kaul, CEO, Centre for Aviation. In 2010, a Grant Thornton report had valued the Kingfisher brand at about Rs 4,111 crore, three times its market value at the time.

Along with the Kingfisher shares, Mallya has also pledged his holdings in UB Holdings, which has interests in both liquor and aviation. By default now, if the plug is pulled on Kingfisher, Mallya’s stake in the liquor companies (including United Spirits and UB Ltd) are under threat. Mallya’s flagship beer company UB Ltd has a joint venture with Heineken (UB has a 40.4 per cent stake). Industry sources say there is a strong possibility that Mallya may choose to pare down his personal stake (which is around 18 per cent) in the business in order to save Kingfisher. However, Heineken has raised concerns about the dilution of the Kingfisher brand name. This is the subject of current negotiation, according to sources.

If they can find a flight, that is. The airline is available on only a few routes domestically. Not surprisingly, Kingfisher’s marketshare has crashed to about five per cent. A small number of consumers willing to put up with the delays and the abruptly cancelled flights have still been flying on the airline. “He (Vijay Mallya) has always been a survivor and I hope that he will pull a rabbit out of the hat. A closure of the airline may lead to a cartelisation in the sector,” says G.R. Gopinath, Air Deccan founder. But Kingfisher’s customers—like its options—have been dwindling rapidly. And that is the unhappy reality for the king of good times.

By Arti Sharma with Arindam Mukherjee and Lola Nayar

The Sense Of A Community