Punjab's emigres find home in Italy, putting their farm skills to good use 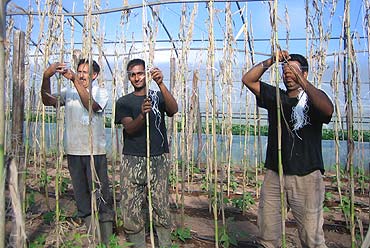 outlookindia.com
-0001-11-30T00:00:00+0553
The hills of Colli Albani stand guard in the distance and the one road nearby leads to Rome. Inside the small farm shed, Guru Nanak looks kindly down from three walls out of four, competing with the bric-a-brac cramming the room—four beds, one book-shelf, suitcases in line and stacks of DVDs. The adjacent kitchen, which converts to another bedroom at night, has rudimentary cooking utensils, a rickety table, a huge plastic barrel of atta and two refrigerators. A neat row of clothes pegs carries the burden of entire wardrobes.

Harjit Singh, who came to Italy two years ago from India, is making milky tea for the Punjabi workforce on this lush farm south of Rome. Tajinder Singh, barely 18, and who landed here just five days earlier after paying an agent Rs 8 lakh, helps with the chores. He doesn't have a job yet but he has shelter thanks to his village brethren. "Everyone comes here to earn money; I too decided to come," he says, smiling shyly. But tears well up when he talks about his family. It's still too raw—the departure, the journey, the touts, the alien languages along the long route of illegal migration.

The two rooms are home to 11 men from Punjab, some legal, others illegal, but all bound by a common will to survive with few resources and many insecurities. Goldy Singh trundles back after a 14-hour workday, having secured delicate green bean tendrils with ropes and sticks. He opens a beer, shaking mud off his rubber boots and exchanges pleasantries with Satinder, a man of many trades and skills. Satinder, who connects Italian farmers with illegal Punjabis, owns two shops in Italy, exports Murano glass to Mumbai, drops names and goes to the West Indies for the World Cup, is one of the few regular links between the isolated workers and the world. The cellphone is another.

There is comfort in the brotherhood as men from the villages of Punjab come together in far-flung communities in Italy, a new favourite destination of illegal immigrants. More than 50,000 of them, mostly Sikhs, are spread across towns such as Reggio Emilia, Casina, Bergamo and Brescia, a far cry from Kapurthala, Hoshiarpur or Ludhiana, labouring with quiet determination and doing jobs the Italians are unavailable for or unwilling to do. Some make as little as 500 euros a month, exploited by crafty employers. Those who become legal can make up to 1,500 euros.

Last week, at a cultural evening organised in Rome by a Punjabi who's now an official with an Italian workers' union, singers belted out ribald songs before a meal of chicken curry and naan. A prosperous looking Balbir Singh Lall sat in the audience with his wife and son, recounting how he came 18 years ago after paying an agent Rs 17,000 for a tourist visa. Today the price is anywhere between Rs 6 and 10 lakh. "I didn't know where or what Italy was, but I hoped to find work," Lall said, fiddling with his fancy cellphone sporting a Guru Nanak screensaver. Work he did find—first in a circus as a driver, then as a labourer and electrician. Today, he owns a factory making grilles for windows.

The Sikhs are also making wine and cheese. Up in the northern Emilia Romagna region, home to the famed Parma ham, the Punjabi worker, with his intuitive farm skills, has added another P to the big two—prosciutto and parmesan. They are curing tonnes of meat into prosciutto and turning gallons of milk into parmesan cheese, a sprinkling of which is essential over pasta. They have reportedly even improved the process.

But come Sunday, and a mini-Punjab sprouts in the 22 gurudwaras across Italy with shabad kirtans and langar, providing an anchor to the thousands of Sikhs who long for the sounds and smells of home. Last month, Baisakhi was celebrated with abandon and large processions. Nearly 8,000 Sikhs assembled in the heart of Rome with Indian ambassador Rajiv Dogra and the Italian home ministry's Marcella Lucidi attending. Italian officials often provide stadiums and halls for free to the Indian community for anything from kabaddi matches to bhangra competitions. Italy's social democratic traditions and a general acceptance of outsiders, specially if they're not trouble-making or crime-prone, have helped assimilation. 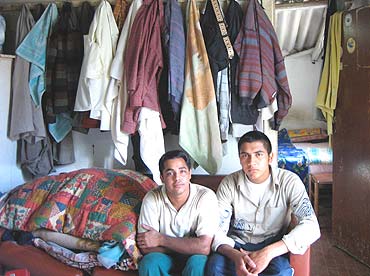 Harjit and Tajinder share chores and room in Rome

"Every time I attend a function, Italians tell me the Indians are a perfect example of a hard-working, disciplined and law-abiding community," says ambassador Dogra. He recalls a time in the mid-'80s when there were only 300 Indian passport-holders here, but today Indians are the second-largest group.

Indians have indeed largely escaped the anti-immigrant sentiment prevalent against Romanians, Albanians and many Africans who have been stereotyped as petty criminals. Illegal immigrants from Muslim countries have to battle a general fear and Islamophobia but India's credentials as a secular country help assimilation. The Sikhs also shed their long hair as the first act of sacrifice to be accepted. "A beard and a turban in their minds make a jehadi," says a long-time Sikh resident. As they acquire legal residency, many grow their hair again. "These chaps not only survive but adjust without any language skills in a white society," says another analyst.

Peter Schatzer, chief of mission in Italy for the International Organisation for Migration (IOM), says that while Italy doesn't encourage immigrants, it recognises it needs them. It has a regime based on quotas and every four years many are regularised. Besides, the grey economy is extensive and employers exploit illegal workers by paying them half the regular wage.

Every year, new routes are devised by greedy agents to fleece young men in villages with dreams of a pot of gold. The chain oiled with hard cash begins with a flight out of Delhi to Moscow. A Russian visa is easier to procure. Once in Russia, the illegal immigrants go "donkey", a poignant euphemism for the land route. Hiding in trucks and airless lorries, they cross over to Ukraine. Some walk miles through dangerous roads, plodding through snow in canvas shoes. From Kiev, they are taken to Slovakia from where they slip into Austria, the edge of the western dream. They pass through forests on small roads, a method called 'Tarzan'. From Austria they either filter into Germany or Italy. The sea route begins with a flight to Libya or Greece from where they're taken to Malta and ultimately to Italy across the Mediterranean. That's 'Columbus'. They "lose" their passports, have little or no money, and only hope to hang on to. But that hasn't stopped them from being driven by dreams of la dolce vita in Italy.