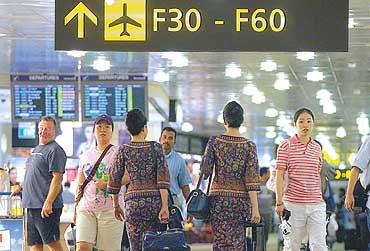 Indian airports are poised for a radical makeover. The contracts to modernise the existing ones in Delhi and Mumbai have been inked. The work to build new ones in Hyderabad and Bangalore has begun. Since these have been farmed out to private parties, the state-owned Airports Authority of India (AAI) may be asked to modernise 30 airports in tier I and II cities to counter the criticism from the Left parties. In addition, two new airports will be built in Delhi and Mumbai. The Indian aviation sector may witness an investment of $50 billion, most of which will be used to improve infrastructure.

"Airports infrastructure is one of the hottest sectors for both promoters and investors," feels Jayesh Desai of Ernst & Young. So, apart from entrepreneurs like GMR, GVK, Siemens and L&T, private equity players like Citigroup, Blackstone, OchZiff and George Soros' Quantum Fund are queuing up to invest in these projects. The potential is clear: last fiscal, the domestic passenger traffic jumped by 24 per cent, while international one grew by 17 per cent. By 2010, the combined passenger traffic is estimated at 90 million, with an average annual growth of 12 per cent. 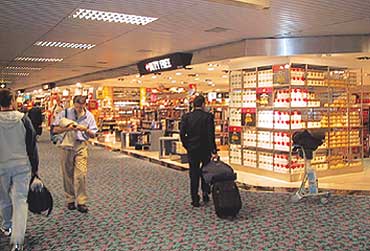 Regular travellers are excited, so are the airlines. Saroj K. Datta, director, Jet Airways, says the current AAI charges are "very high" and constitute 10 per cent of overall costs. Capt Gopinath of Air Deccan rues the fact that he pays Rs 10 crore a year to the AAI for airport security which is higher than his wage bill. He and Datta feel their costs may come down as private airport developers realise that nearly half their revenues will come from non-aeronautical sources and, hence, the latter will give sops to airlines who can bring in more passengers to their airports. That's why Ajay Singh, Spice Jet's director, is demanding an exemption from landing charges from the new developers.

But there are some fears too. Critics contend that airports privatisation will imply a movement from a public monopoly (AAI) to a private one. "I'm not against private players, but an independent regulatory body should be established to curtail tarrif monopolies," says Gopinath. Others question the decision to use the old airports (in Hyderabad and Bangalore) only for military purposes once the new ones are operational. Apart from a collosal waste of existing assets, it'll end any form of competition.

No one can, however, deny that flying experience will improve. In 2008, this is how the airports in Delhi, Mumbai, Hyderabad and Bangalore will look like.

Mumbai: Fly over the slums

GVK, which won the bid for modernising the Mumbai airport, has a simple masterplan. It will shift from the domestic flight's hub to Sahar international airport, and use the one in Santa Cruz for cargo planes only. A second parallel runway will be built at Sahar to handle the extra traffic. At present, 300 flights take off every day from Santa Cruz and another 250 from Sahar, and heavy congestion during peak hours results in delays and crippling fuel costs as many flights have to circle the airport before getting permission to land. GVK also plans to use the 4-acre parking space more judiciously—a seven-storey parking facility with restaurants and cafeterias.

Inside the airport, travellers will get more comfortable seats. Sources contend that the company is mulling the possibility of constructing a five-star hotel near the existing AAI's housing colony in Chakala (near Andheri East). But that'll involve the rehabilitation of nearly 1,000 AAI employees. GVK will connect the city to the airport through a proposed metro network and a flyover that'll join the western expressway with the airport. To handle the traffic between terminals, it may use a mass rapid transport system—like the sky bus—and sources say discussions have been initiated with a likely contractor, the Konkan Railway Corporation.

The contentious issue for GVK, however, will be the encroachment by 80,000 slum-dwellers on airport land. The company has met mmrda officials to tell them that the city authority is responsible for clearing 12 per cent of the encroachers and relocate them to transit camps by the end of this year. It has also appointed Mukesh Mehta, the architect and brain behind the Dharavi redevelopment plan, to conduct a base-level socio-economic survey among the remaining households to determine the rehabilitation eligibility mark. Experts are not too sure about the viability of GVK's plan, especially as the company will share 38 per cent of its revenues with AAI. In addition, there'll be competition from the new proposed airport in Navi Mumbai that'll be operational in the next few years.

"The race to develop airports is so keen that private promoters are willing to part with almost half their reven-ues," says Desai. True. In the case of Delhi airport, the winning consortium headed by the GMR group is willing to give 46 per cent of its income to the government. The reasons: projected revenues for this fiscal are much higher for Delhi (Rs 580 crore) compared to others, except for Mumbai, and it's a brownfield airport and the private firm earns profits from day one. GMR's choice of Delhi was driven by a couple of other factors. Compared to Mumbai, Delhi's problems with encroachments around the airport are minimal. In addition, Delhi has more vacant space and GMR can build additional infrastructure to boost its topline.

The GMR group, with consortium partners Fraport, Malaysia Airports and India Development Fund, owns 74 per cent of DIAL and is building an almost new airport in the 5,000-acre space. Technical consultants, iit Delhi, have been asked to give inputs for separate terminals for international and domestic passengers, and new access roads, runways, taxiways and parking bays. The consortium will soon issue a global tender for a new passenger terminal building and the air-side and land-side construction. The idea will be to initially construct a full-service terminal and, later, think of a low-cost one.

It has roped in people with global experience like Thua Chai Teck and Khong Peck Kim, both of whom worked with the world-famous Changi Airport. Mott MacDonald will be paid Rs 60 crore to be retained as the lead technical advisor. hok International, which has handled 50 airport projects worth $20 billion in the past five years, will design the new airport. A master development plan will be submitted to the AAI within the next six months. The management team will include coo Papa Stefanou Yanni from Athens airport and Bruce Benjamin, who heads the project management team for the Hyderabad airport, also being built by the GMR group.

Work is on in full swing at Shamshabad, the site for Hyderabad's new airport. Entailing an investment of Rs 1,760 crore, it'll have one building to house the domestic and international terminals. "All new airports follow this model as it eases transit," claims T. Srinagesh, coo, Hyderbad International Airports Ltd. The proposed airport will have the longest (4,260 m) and the widest (60 m) runway in the country, 60 check-in counters, handle 4 million passengers a year and 150 flights a day. It'll allow passengers on international flights to be on the street within 34 minutes, half the current time. And it'll have a 10,000 sq ft 'village' with a visitors' lounge, restaurants, an airport hotel and a mini golf course. 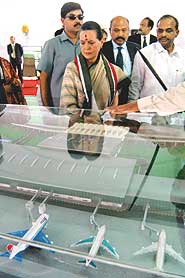 The Bangalore airport, unlike others, has been jinxed. In 1991, the Tatas walked away because of delays. BIAL, the current consortium, comprising Siemens, l&t, and Unique Zurich Airport, got a go-ahead in 2001. But a study in June 2005 estimated that the passenger traffic in the first year of its completion, 2008, will be 6.7 million. That led to a change in the original plans, as the company realised that the proposed facilities will not be able to handle such a high load. So, construction only started in July 2005, although the project blueprint is still being redesigned.

Spread over 3,900 acres, it'll have the regular items on the menu: a hotel, malls, food courts, etc. Since it's situated 34 km from the city, the approach roads are being widened; NH-6 and NH-7 are being made six-lane roads and city roads through Hoskote and Hebbal will be upgraded into four-lane expressways. But what's interesting are the strategic partnership in more critical areas.

On May 17, 2006, BIAL announced the partners for cargo-handling operations. sats/Air India, Bobba group and Menzies Aviation will design, build, finance and operate (for 20 years) the cargo facility at a cost of Rs 150 crore. Says BIAL's Brunner, "This will help make the Bangalore airport a regional cargo hub." Earlier, on March 1, 2006, Brunner selected Oil India, Indian Oil and Skytanking as partners to build the aviation fuel facility at the airport. Explains Stephan Widrig, chief commercial officer, BIAL, "This will be the first Indian airport with fuel facility under an open-access model. It'll allow every qualified supplier to use the facility and, thus, allow airlines to get the best prices. Airports have to do that to become an attractive destination for airlines (and also customers)."