The town's baal mithai has khoya, sugar and childhood memories rolled into it 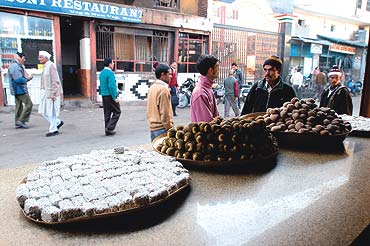 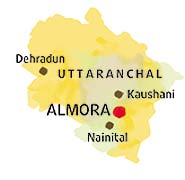 Ever since I can remember, every relative from Almora came to the plains bearing the same gifts in identical bundles (carelessly knotted old saris). There were fat radishes that were lovingly made into a farty-smelling watery curry with potatoes, capsicum and curds, slurped by the oldies but hated by us new-generation types. Once when an aunt was cooking this vegetable in the kitchen, our music teacher broke off a taan to declare, 'I think a gutter has burst in your house!' There was jambu, a dried Tibetan herb (like dried chives) smelling like unwashed armpits, but had the power to make sensational potato gutkas. Gargantuan cucumbers, sunned on tin roofs till their skins turned brown, that made the delicious yellow, mustardy raita to eat with the potato gutkas. And black soya beans that were made into creamy broths by the cook but looked so poisonous that our non-Pahadi friends looked alarmed when they were ladled out. And there was always the ubiquitous box of baal mithai.

For some odd reason, baal mithai was only made in Almora and Joga Sah was its only creator. My grandmother, Ama, sniffed as she declared that after he died, no one made the same mithai any more. Joga Sah was apparently a wizard who invented this phallus-shaped dark brown sweet that was covered in what we thought were homeopathic pills (Rubbish! my Ama said. Joga only used khus-khus seeds dipped in sugar!). Joga got milk from Phalsima, the village famous all over Kumaon for its creamy dairy produce. Then he boiled it for days and nights until it evaporated into rich khoya. Sugar was added and the mixture roasted until the sugar caramelised and turned it dark brown. It was then moulded into a sausage-shaped roll and studded with khus-khus seeds. That was the real baal mithai, understand?

Once Joga had made the baal popular, other pretenders to the throne entered the scene. Two brothers-in-law—Kheem Singh and Mohan Singh Rautela—cleverly set up a shop near the bus stand and made a fortune selling their ware to every passenger. The beauty of baal mithai was that it never went 'off': it just became drier and less chewy. Its long shelf life ensured that it travelled out of Almora (still unconnected to the rest of the world except by road) to gain fame.

Thus, Almora's other delectable sweet, the singauri, sank into oblivion. Singauri is also a milk-based sweet, a kind of kalakand with a hint of coconut and cardamom. It is shaped into a cone and wrapped in a tender maalu leaf, secured with wooden sticks. The maalu leaf gives it a delightful camphor scent and also keeps the fingers from getting sticky. But to taste it, you have to travel to Almora. And, just as Lucknow's malai ka paan has to be savoured standing at Ram Asrey's little shop in the Chowk, Almora's singauri demands you come to Joga Sah's Lalla Bazaar shop to eat it. 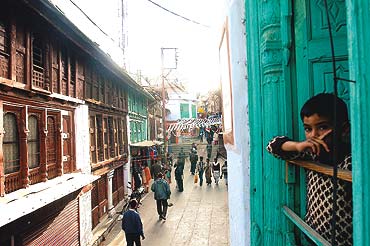 Never forget, however, that Almora is also the ultimate town of guppies—people who make up stories that are so real that it is difficult to sift the truth from the lore. Recently, I was told by a cousin, a champion guppi, that Joga Sah was actually a Christian, called Joga Isai, who had learnt to make fudge from two American teachers at the local Adam's School and what was called 'ball mithai' by them (after the little sugared balls studded on their fudge), was 'Brahmanised' by Joga, who changed his Christian name to a kosher Hindu one and baal mithai was born! "That is why," this guppi said, "the precursor of the baal was the 'chocolate' mithai." He may well be right, for there are still chocolate-looking fudge squares, made of caramelised khoya, wrapped in butter-paper to be seen in Almora's halwai shops.

"Don't believe him," the next guppi piped in. "We Pahadis call anything that is rolled up a baal. Don't you remember the roti ka baal that Ama would make for us? With ghee smeared on chapatis and sprinkled with sugar before being rolled into a baal? That is how baal mithai got its name. It is rolled-up khoya and sugar!"

But, believe me, whatever the ancestry of the baal mithai, for me and for all my Pahadi brother and sister guppies, baal mithai is the stuff our childhood memories are rolled up in.