When the IPL commissioner commandeth, the team owners obeyeth. So when I said, ‘No Paki players this time’, no one dared bid for them. 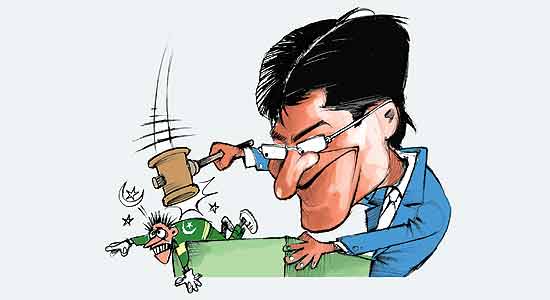 When the IPL commissioner commandeth, the team owners obeyeth. So when I said, ‘No Paki players this time’, no one dared bid for them. I tell you, I hate Pakistanis. So does Vasundharaji and Advaniji. Although the latter is still fond of Jinnah and wondered why we couldn’t use the Qaid-e-Azam’s bowling skills for the Rajasthan Royals. (Incidentally, Sudheendra Kulkarni thinks he is a good bat!) And yes, before I forget, Jaswant Singhji rung up to say that he felt Jinnah would make a good umpire. Oof! The politics of cricket. It can sometimes be more tricky than the crumbling Kotla pitch.

That apart, you see, the Pakistani players simply had to be kept out from IPL-3. Why, someone senior from the RSS (it now turns out that he was an ISI agent!) sent me a coded message in Sanskrit to say that as IPL commissioner I could play a key role in dictating Indo-Pak foreign policy. “All this bhai-bhai business,” it directed, “must stop. So please create a diplomatic incident by keeping the Pakistani players out...humiliate them.” To be honest, I simply could not make head or tail out of all this, so I promptly sent the message for decoding to Murugan & Slowly who can pull off some impossible stuff like make phone calls while standing on their head and file feasibility reports with cooked up figures. Anyway, to cut a long story short, once the message came back to me in shuddh angrezi I acted swiftly. I called up Vasundharaji and she advised me to call up the owners of the teams. So I rung up Shilpa Shetty. “No Pakis please, we are Rajasthan Royals,” I said. “Lalitji, should I simply not bid for them,” she cooed back. That sparked off a brilliant idea in my head—list the players as probables and then ensure that they have no takers. That would certainly belittle them. So I put a call through to all the Preity Zintas and Vijay Mallyas of the world and the rest was all on the front pages.

The RSS (oops, ISI!) man is indeed very thrilled by all the angry voices on both sides of the fence. “Lalitbhai, you have done a great service to our mutual distrust,” he said in defunct Nordic. After the call was over, I immediately took the recording to Mr Murugan who translated it into Sanskrit and then Mr Slowly rendered it slowly into English. The duo do have a strange style of functioning. Interestingly, I don’t think many Pakistani players are keen to play in India even if they are picked. Reason? The ISI, which regularly taps my phone, has been circulating a transcript of a conversation I had with BJP chief Nitin Gadkari in which he advises me to put up the Pakistani players in tents. “They can stay ‘five-star’ but only in tents. Why, if BJP leaders can rough it out, why not the cricketers?” he said in a matter of fact manner. To me that’s certainly cricket.

A Spy And His Soup