I sincerely believe that Lok Sabha debates can be livened up, made more entertaining and can even end up generating advertising revenue 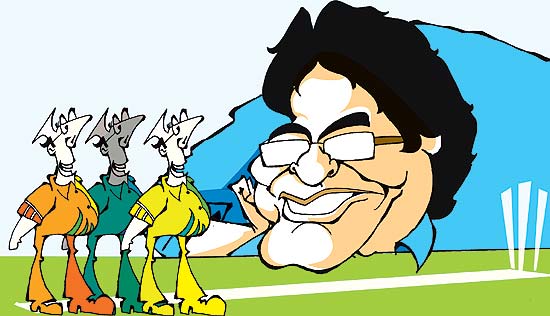 My Diwali gift to the nation (which I have to keep under wraps pending government approval) is a unique scheme to bring colour and drama to parliamentary proceedings. I have already made a presentation to Sam Pitroda, the PM’s advisor on innovation. And he approves. Sam himself is working on a project that will reduce noise pollution during the festival of lights. His ultrasonic crackers can be burst freely since their ‘dhamaka’ is beyond the auditory range of humans. But the ‘soundless’ fireworks will only hit the market next year. So we can look forward to a quiet Diwali in 2010.

Anyway, coming to my proposal, I sincerely believe (given my T-20 experience) that Lok Sabha debates can be livened up, made more entertaining and can even end up generating advertising revenue. This will subsidise the cost of governance substantially and parliamentarians will not be accused of wasting public money. So, without much ado, here goes my plan of action:

Form teams: For starters, MPs should be grouped in teams and not political parties. This will give them a brand identity. For example, Congress netas could be part of Sonia’s Soldiers. And then you could have Advani’s Avengers, Laloo’s Yadavs, Mulayam’s Musclemen, Mayawati’s Sahibs and Memsahibs and Karat’s Cobras. Once the team names are finalised, my team of artists will design logos and other merchandise.

Better dress sense: Right now our parliamentarians (in their crumpled khadi whites) look like boring Test players. The new outfits will be bright, colourful, trendy and will look good on TV. Clothes, they say, maketh a man. It also maketh politicians. Incidentally, my dress code has the approval of ex-Rajasthan CM Vasundhararaje although she felt that I have to come up with something more imaginative than saffron bermudas for BJP MPs.

No more boring debates please: The essence of T20 is pacy entertainment. Lok Sabha speeches must be in the same vein, full of wit and not extending beyond three minutes. And the budget will have to be presented in 20 minutes flat. To add more zing to bhashans, it won’t be a bad idea to employ some Australian coaches (ex-cricketers known  for sledging would be the ideal choice). Also, marshalls in the House would be replaced by cheerleaders to ensure better TRP ratings.

Get sponsors: Once my new format is introduced, advertising possibilities open up. Indeed, I envisage a day when the FM stands up to deliver his budget speech even as a breathless announcer reels off the the sponsors (“this part of the budget sponsored by Coca Cola, Hero Honda, Seagrams 100 Pipers Pure Music and Kurkure”). And yes, individual teams can be owned by corporates, filmstars and other celebs. Also, after each session team owners can bid for players (oops MPs!) at an auction conducted at the Azadpur sabzi mandi. So, what are we waiting for? Let the fun begin and may the best team win.

49% Say The Fight Against Maoists Will Never End