Diwali card parties now revel more in snobbery. And a knack to shield the illegality. 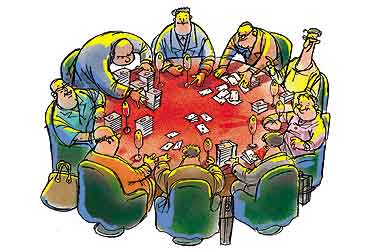 outlookindia.com
-0001-11-30T00:00:00+0553
It's three o'clock at night, and the party is just beginning. BMWs, Mercs and Skodas are parked three-deep outside a well-fortified farmhouse in a lane off Delhi's MG Road. Inside, the lawn is bathed in soft light and dotted with card tables where guests are busy soliciting Lakshmi by upping the stakes at every blind. At many tables there are tall piles of thousand-rupee notes that start disappearing with every round. "Some 50 lakh rupees will change hands at these tables before morning," boasts the host, Nirmal Kapoor, a young industrialist. That's small change in Delhi's Diwali card-party circuit which is nowadays buzzing with the talk of a recent party held at the home of a Chandni Chowk-based arms dealer, where the stakes went up as high as a couple of crores of rupees.

In a suite at a Mumbai five-star hotel, a group of twentysomething men—all scions of influential business families—are having one of their thrice-weekly sessions of Flush that begin a month before Diwali. Among them is Vishal, son of a prominent family of film producers. "Our group is playing about 20 per cent higher than last year," says Vishal. "The stockmarket has done well, so has business, so we can all take higher risks." At the end of a night, losses typically range from Rs 2 lakh to Rs 10 lakh, he says. Karan Kambli, son of a business tycoon, is one of the regulars at these sessions; he says he's down Rs 4.5 lakh this season. "I'm going to head off to London this weekend—it's cheaper," he jokes. In fact, NRIs from London are flying over in droves for the Diwali cards sessions in Mumbai and Delhi. Just last week, two prominent socialites inform us that the world's richest Indian, L.N. Mittal, was seen enjoying himself at Delhi's Diwali parties.

What happened to the good old Diwali card parties characterised by booze, bonhomie and a little flutter around someone's dining table? "There are no taash ki rani parties any more," laments tireless Mumbai party animal Kishen Mulchandani. "You cannot play with Rs 2,000-5,000 now. You have to play for at least 2 lakh to 5 lakh." Confirms Vishal: "This year, the party scene is 70 per cent down. The serious kind of gambling get-togethers are on the up and up." Shobha Deepak Singh, a daughter of the Charat Ram family of industrialists whose Diwali card party is an institution on Delhi's social calendar, also decries the growing trend towards serious gambling for big stakes: "They say that on Diwali night Lakshmi can come to your house any moment, so we stay awake all night playing cards to be ready to greet her when she arrives. That tradition, that spirit of playing cards on Diwali has got lost."

Observers of Delhi's social circuit say that for the young and restless, as well as for the nouveau riche, hosting card parties has become just another opportunity to flaunt their wealth and wannabe ambitions. The guests saunter in, dressed in Tahiliani kurtas, Rathore bandgalas, Chanel bags, YSL mules and Parineeta blouses to win and lose their lakhs in high style. Car keys, expensive watches and diamond rings are put down on the table once the bundles of currency notes run out. The grapevine has it that last year a player at one of these parties was down by more than Rs 20 lakh and promptly put the keys of his E-Class Mercedes down on the table. But before the end of the evening his luck turned and he kept his car.

Recalls Mulchandani: "I went to a party in Delhi where someone carried in a Louis Vuitton suitcase with a crore of rupees in it. He was just dishing it out." Typically at these parties, he says, there are one or two rooms set aside—sometimes in the basement—where no one else is allowed in. This is for the really big-stake players—usually industrialists, top politicians and actors—and the kitty goes up to Rs 20-25 lakh. According to a Mumbai film industry source, "Customs officials and income tax officers are invited to these parties, and we let them win. That way we don't have to worry about our parties being raided." A leading event organiser in Mumbai says his clients usually "make arrangements" with the police station to ensure that no uninvited cops appear at the party. As an additional precaution, he says, many people gamble with tokens at the table, and the money is kept elsewhere. "Mostly, in a secluded area. That way, if a raid happens, you can say 'See, we're just having fun here, gambling with tokens'." 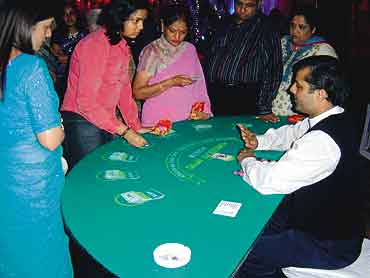 Social columnist Devi Cherian observes that Diwali card parties have become the perfect occasion to further business interests. You have some land trouble? Invite the MLA from the area for teen patti and let him win. A new guy in the trade creating problems? Invite him for a night of Flush and ensure that he loses some hard cash. "There's a lot of cheating happening all the time," says Cherian.

Lakhs are spent on food and drinks, DJs and themed decor. In Mumbai, the casino look is much in demand this year. Kalpesh Desai, who spent five years in Atlantic City, has a winning hand this Diwali. He is booked solid this season, with five parties to organise every night. His company, Aces Over Kings, sets up a casino for the client—including blackjack, poker and Russian roulette tables—for Rs 25,000-50,000. Charges go up as the party pulls into the wee hours of the morning. The biggest win Kalpesh has seen so far is when someone won Rs 4.5 lakh in one hour at the roulette table. Kalpesh says he always warns his clients that real gambling, even playing teen patti in a hotel, is illegal. After that, it is up to them to take precautions.

Also hot this season in Mumbai is having a party on a ship. The owners of a well-known industrial group have chartered a Star Cruise ship for October 29 with 200 people invited for a champagne dinner with five-star catering. And the gambling will begin once the ship travels 12 nautical miles out to the sea, into international waters (where it is legal to gamble). A much bigger Bollywood bash is being held on a Star Cruise ship on October 31, with 1,500 people invited. It costs Rs 1.48 crore to charter the Star Cruise ship, Super Libra, for one night, including casino and excluding drinks.

Adman Suhel Seth says he finds such extravagance outrageous in the face of a tragedy like the Kashmir earthquake, and feels the government should crack down severely on high-stakes card parties. But Delhi's chatterati shrug off such 'spoilsport' attitudes, as they exchange gossip about the "divine decor" that has been created for card parties this year. This includes cascades of diyas, invitations shaped like firecrackers and trays of mithai made of pure silver. The socially ambitious angle for invitations to the stylish Diwali dos held by Natasha Nanda, cardiac surgeon Dr Naresh Trehan, Monish and Alka Bali of Mount Shivalik Breweries, Sunandan Kapoor of Kapoor di Hatti, and the cineplex tycoons, the Bijlis.

In Mumbai, apart from the cruise ship galas, the must-be-seen-at card parties this year are Rakesh Roshan and Jeetendra's do on October 28, Gulshan Kumar's brother Kishen Kumar's bash the next day at Versova (where Salman Khan, Katrina Kaif and Sonu Nigam are regular guests) and shipping tycoon Ravi Arya's October 30 party at his Walkeshwar Penthouse where guests are likely to include Malaika Arora, Yana Gupta and Kaanta Laga girl Shefali Zariwala. It's anybody's guess where Shahrukh Khan will be this Diwali, but last year Chunky Pandey's wife Bhavna played at the same table with him. And found "he is very good at bluffing. You can never tell what his cards are—he's an actor, after all. He also has the luck of the devil."

And when there's time for conversation at high-stake card parties, the talk will be invariably about who are the ones always lucky or unlucky at cards, who won, who lost and by how much. They still narrate with awe how Lalit Modi, son of industrialist K.K. Modi, once lost a couple of crores to hotelier Lalit Suri at a card game, how cinema tycoon Ajay Bijli won a movie hall (Priya in New Delhi, we are told) at a card table and how the patakas were drowned out when a mighty fight broke out between Suri and Singapore-based tycoon Dadi Balsara. Nirmal Mishra, main scriptwriter for Madhur Bhandarkar's Page Three, recalls how Akshay Kumar punched Shakti Kapoor during last Diwali when the latter accused him of cheating. "Shakti almost fainted. For a moment, everyone thought he had died," Mishra recalls, adding that on the whole, contrary to what people think, "the filmwalas are kanjoos—the stakes are much higher at parties given by industrialists and businessmen".

The buzz in Delhi's Diwali party circuit is that the legendary big winners include Lalit Suri, Kapil Dev and the Singhanias. And the big losers? We won't name them yet—maybe their luck will turn this year.

(Some names have been changed to protect the identity of sources.)

Shobita Dhar In Delhi And Payal Kapadia in Mumbai