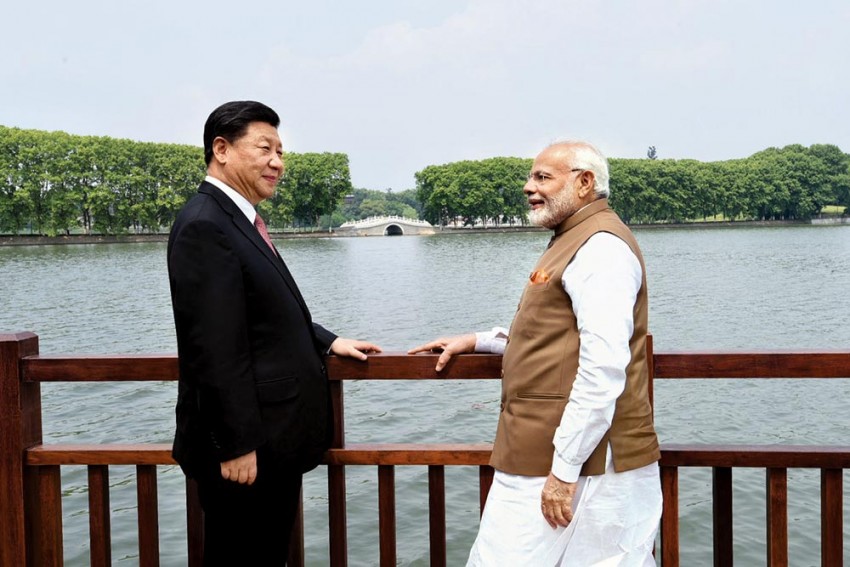 Rise Together
Prime Minister Modi and President Xi by the East Lake, in Wuhan, China on April 28
Photograph by PIB
Pranay Sharma May 03, 2018 00:00 IST Lake Placid 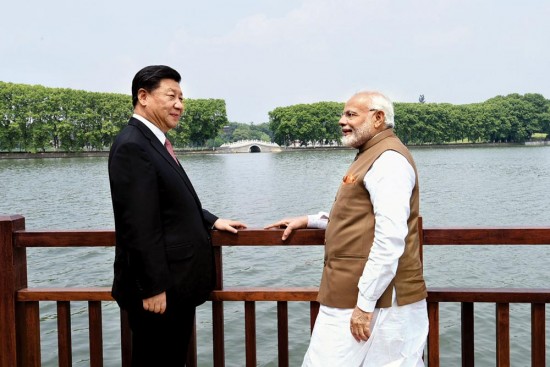 A correlation between the departure of one of India’s longest serving foreign secretaries, S. Jaishankar, and a visible improvement in Sino-Indian relations is lik­ely to be seen as a tenuous argument meriting an outright dismissal from seasoned Indian diplomats.

Yet, sections within and beyond the Indian foreign policy establishment are joining the dots and linking recent developments in South Block with those in the outside world, seeking to explain the informal April-end summit between Narendra Modi and Xi Jinping in Wuhan.

The unique dialogue between the leaders has raised hope that this could remove bilateral strains and bring the two nations closer for a more cooperative and realistic partnership. As both were looking for steps towards a rapprochement in a post-Doklam scenario, some global developments, perceived to be significant for both countries, might have played a role in hastening a thaw. A change of guards at South Block, with Vijay Gokhale, an old China hand, taking over as foreign secretary, along with two other seasoned China experts—Gautam Bambawale as Indian ambassador in Beijing and Pranay Verma, as joint secretary East Asia in the MEA—certainly made a different approach to China more visible.

Good relations or frosty, India expects the ‘red lines’ over its key security concerns to be respected by Beijing. But a fundamental pri­­­­­nciple now adopted by New Delhi is to avoid unnecessary con­­­­frontations with China, especially those where costs outstrip returns. The so-called ‘Tibet card’ is a prime example. Despite the hype that usually goes with the idea, its pote­ntial leverage value has been uncertain. This was perhaps the reason why Gokhale had advised scaling down all programmes to celebrate the completion of the Dalai Lama’s 60 years of exile in India, since Beijing always saw these as part of New Delhi’s plan to destabilise it by using the Tibetan leader.

“My hunch is that the Trump factor too figured prominently in Modi’s calculations,” says John Garver, veteran commentator on Sino-Indian Affairs.

Garver, emeritus professor of International Relations at Georgia Institute of Technology, points out that with Trump relying on China’s strong sanctions on North Korea to compel Kim Jong-Un to come to terms with the US, it was  relevant to question the reliability of the US’s support in the event of an escalation between India and China.

India wants to avoid a needless air of hostility with China. This line benefited from Jaishankar’s departure.

But China also has questions about Trump and his threat about sanctions, which can lead to a trade war. In anticipation of that, India becomes very important to China, both as a market and a source for essential supplies. Going against the grain of his pugnacious talk vis-a-vis China, therefore, Trump has of late been stressing on his great respect for Xi Jin­ping, while China, on its part, had been offering various economic ‘concessions’ to the US. “Against this background of Trump’s search for a deal over North Korea, would he be willing to stand behind India in the event of a confrontation?” asks Garver. He points out that Trump’s alignment with India is weaker than what it was with Barack Obama, George W. Bush or Bill Clinton.

Since the end of the Cold War, various Indian premiers have tried to build relations with the US to hedge against China and expand New Delhi’s strategic space. But, in recent years, India’s open advocacy of strong ties with the US almost made it look like a camp-follower of Washington.

“The primacy the US enjoys in world affairs and the need for India to have strong ties with America cannot be questioned,” says a retired Indian ambassador. “But does it mean we tie ourselves to Washington’s apron string?” This feeling that India did indeed do so, however, got more pronounced under Jai­shankar’s stewardship in South Block.

Jaishankar was hand-picked by Modi when he cut short then foreign secretary Sujatha Singh’s tenure and appointed him to the coveted post on January 28, 2015. He was seen as the chief architect of Modi’s foreign policy, who helped give India a new profile in the Indo-Pacific region. But his detractors criticised him for pushing through a blatantly ‘pro-US’ line, while jeopardising India’s key relations with Russia and China.

Undoubtedly, Jaishankar played an important role in strengthening India-US relations, one of the highlights of which was Barack Obama being the first American president to be the chief guest at India’s Republic Day celebrations. But, as India’s top diplomat and key policy planner, he was also responsible  when Sino-Indian relations were seriously strained, besides the 72-day stand-off between Indian and Chinese troops at Doklam.

Jaishankar has now joined the Tata Group’s global corporate affairs as its president, a company with significant presence outside India. His experience will come in handy for the Tatas as it ventures into the defence sector for joint ventures with US and other Western arms firms as part of Modi’s ‘Make in India’.

Now that a week has trickled by, what are the benefits that can be counted as fair from the Wuhan summit?

Some are sceptical of the outcome. “I don’t think these summits are that  important,” says author of China’s India War, Bertil Lintner. “There are always things happening on the ground and behind the scenes which are more significant.” Lintner says it is in the interest of both countries to maintain some kind peace along the common border. But he doubts whether any fundamental change will happen in bilateral relations. “A ‘cold peace’ will prevail along the Sino-Indian border,” Lintner adds.

But officials who were linked to this renewed engagement are much more optimistic. A senior Indian diplomat points out that it was a conscious attempt to make this an informal summit, so that both leaders could do without protocol and spend nearly 10 hours talking to each other, about developments around the world and their dreams.

India’s agreeing to the Afghan joint venture project will be a tacit approval of China’s Belt and Road Initiative.

It may have been disappointing to some that pressing issues like terrorism emanating from Pak­istan, China’s support for India’s entry in the Nuclear Suppliers’ Group or how the two nations manage their separate interests and concerns in South Asia and the Indo-Pacific region were not discussed by Xi and Modi. However, officials point out that the two leaders have given a direction to ties and it’s now left to diplomats down the line to discuss and resolve these issues.

A direct fallout of the Wuhan engagement is the proposed joint venture project in Afghanistan that China has invited India to be part of. Though such a proposal had been on the table for a while, during the phase of strained ties with India, Beijing’s attempt had been to keep New Delhi out of the strategically important, conflict-ridden country.

At one level, India’s agreeing to the said joint venture is an acknowledgement of the Belt and Road Initiative that New Delhi had opposed because its key part, the China-Pakistan Economic Corridor, passes through Pakistan-occupied Kashmir. From China’s point of view, despite India’s opposition to the CPEC, it is important New Delhi doesn’t resist its initiatives elsewhere in the region. This can only slow down and make the project costlier. The success or otherwise of the proposed Afghan joint venture will determine if it can be a model for India-China cooperation in South Asia.

If that happens, it can herald a more meaningful prosperity in this region, with countries not having to choose between one or the other of the Asian superpowers. More importantly, it can create an environment where India and China can both be more comfortable in their simultaneous rise. There is  enough place under the sun for both.