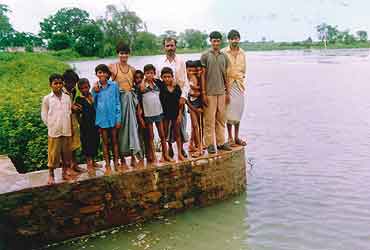 outlookindia.com
-0001-11-30T00:00:00+0553
The Chambal ravines have been the notorious abode of benighted dacoits ever since, it seems, the beginning of time. But it’s only in the past three years that a terror greater than the marauding manoeuvres of the deadly bandits has appeared on the horizon of Jhaknaud village, Shivpuri district, of the Chambal region in MP.

Three consecutive years of drought has diminished the menace of the Chambal dacoits. Instead, it’s the quest for a dependable source of water that has become the primary existential concern of the 300-odd families of Jhaknaud, a predominantly tribal settlement 38 km from the district HQ.

With no water for irrigation, compounded by the fact of poor monsoons, farmers had virtually stopped cultivation. Many had even migrated from the village to find work in towns. But this year the panchayat decided it would seriously try to solve the problem. The search for a sustainable water source ended at a nearby lake, spread over an area of about 20 acres and lying dry for several decades. A series of representations to the state government persuaded the irrigation department to explore the possibility of reviving the water body. But engineers concluded the lake couldn’t be revived because of "obstructions" in the catchment area.

A wizened resident of the village, 82-year-old Kashiram Yadav, however, didn’t concur with this assessment. Though he failed to comprehend the jargon of the engineers, he insisted the water body could be recharged. He mapped out the channels which the inflowing water could take. The villagers decided to rely on his native wisdom. The implementing officers of the district poverty (alleviation) implementation programme (DPIP) were approached. "We decided to take a chance. After all, so much money is wasted on unviable projects," says Rajiv Kumar Singh, project officer, DPIP, Shivpuri.

The villagers formed a self-help group, collected money from within their community and received a Rs 1.3-lakh DPIP aid. Much of the labour was voluntary and unwaged. "There was hardly anyone who didn’t contribute," recalls Singh. Under Kashiram’s supervision and with some technical help from a DPIP team, a new catchment area of around 3 sq km was developed by the lake’s side and obstructions in the way of rain water flowing into the lake bed from other sides were removed. Mud boundaries of fields were relaid to provide a channel for the water. A 100-meter-long retaining wall and a 200-meter-long canal were built. An iron sluice gate was installed.

The work over, villagers awaited the monsoon with bated breath. Initially weak, it was in full cry all of August and much into September. Water flowed steadily into the lake. Now, it’s full to the brim. Enough to meet the needs of the village for the whole year.

With better agricultural output, Singh hopes the problems of indebtedness and forced displacement will be solved. Perhaps, it’ll also have a bearing on brigandage, a phenomenon endemic to the region. Employment can wean away wayward villagers from assisting the dacoits.

Kashiram’s diligence has inspired the formation of 17 other self-help groups. DPIP aid is being sought for projects ranging from a dairy to a flour mill and from a dhaba to a tractor workshop. Kashiram Yadav can be contacted at Gram Panchayat office, Jhaknaud, Pohri tehsil, Shivpuri distt, MP.

The Genie Is Out!