The Ambani-Network 18 deal makes for a complex block diagram 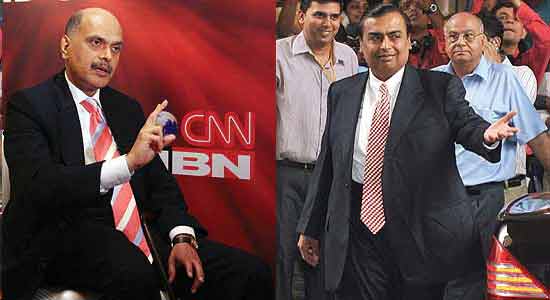 Graying media hands remember a pow-wow addressed by Mukesh Ambani in ’99, when Reliance still owned the weekly Sunday Observer. A journalist asked jocularly, “Mr Ambani, is there any business that you would not like to be in?” Mukeshbhai smiled and replied, “Media”. In weeks, the Sunday Observer was history, as was its daily counterpart.

Over a decade later, in what observers dub a “classic Ambani” operation—a maze of companies, shares and debentures topped by a cocktail of business and politics—India’s richest businessman has announced his impending arrival as its biggest media baron. If all goes to plan, he will have indirect control over the financially troubled broadcaster Network18/TV18, promoted by former journalist Raghav Bahl. Who, in turn, will be shepherding RIL’s investment in the network of ETV channels run by Eenadu founder, Ramoji Rao.

It’s a deal most confess they are “still trying to understand”. A chunk of the interest RIL owns in ETV will be bought by TV18 Broadcasting, which Reliance will fund up to a maximum of Rs 4,000 crore. Not surprisingly, analysts have questions. “What Ambani has tried to do is take his investment out of a bad asset into a viable asset and make a profit in the process,” says one broadcasting veteran.

Crucially, Ambani’s investment in ETV—controlled by Ramoji Rao, the Telugu media baron behind the rise of N.T. Rama Rao and his son-in-law Chandrababu Naidu—was not known till recently. We’re talking Rs 2,600 crore here, no small change even by RIL standards. It was just months ago that Reliance admitted to the AP High Court its investment in Ushodaya, ETV’s parent company.

This revelation came due to a petition filed by MLA Y.S. Vijayalakshmi (late Andhra CM Y.S. Rajasekhara Reddy’s widow), seeking a probe into the irregularities of the Naidu government. Vijayalakshmi alleged that RIL had bailed out Ramoji Rao when his family-owned chit fund Margadarsi Financiers was in trouble, an apparent quid pro quo for Naidu’s help in securing for RIL the KG Gas Basin deal.

“The Chandrababu Naidu-Ambani friendship began long ago when Naidu was a key player in the NDA government,” says Congress MP Undavalli Arun Kumar, who is involved in a legal tussle with Ushodaya. The buzz: RIL bailed out ETV after a deal between Ushodaya and private equity investor Blackstone was scuppered by then Andhra CM YSR. Investment banker Nimesh Kampani of JM Financial then pumped in Rs 2,600 crore (he was hounded by YSR for his efforts). In 2008, ETV was transferred to RIL.

This raises the second question: why have the regional ETV channels been valued at such high premiums? In his report on the deal, Nikhil Vora, MD of IDFC Securities, says: “The value paid by RIL may not represent the true value of the asset as it involved other considerations between the transacting parties.”

The Rs 2,100 crore that TV18 will pay RIL for getting a slice of ETV seems like a worrying investment for the listed company. Adds Vora: “For TV18 shareholders to generate an optimal return of 15 per cent in the next five years, ETV would need to garner a net profit of Rs 550 crore (equal to its revenues today). We believe it will be extremely challenging to justify the economic merit of this transaction for TV18 shareholders.” Also, what happens if the rights issues remain undersubscribed?

The economic logic for the deal is said to be that of Reliance getting preferential access to TV18 content for its proposed 4G plan under its subsidiary, Infotel (which will be launched next year). But market analysts don’t agree. “Why would you want to acquire a company just to get access to content? These media companies are in the business of providing content. It’s very clear this is a foot in the door,” says Arun Kejriwal, director of research firm KRIS.

While RIL investments will be routed through an independent trust and suitable noises have been made about editoral independence on both sides, not many are buying it. “If somebody is pumping in that much money into an entity it stands to reason that he’s going to own the business and therefore the content. Bahl can keep talking about holding on to voting rights but it means little when the significant economic interests lie in the hands of another,” says the broadcast veteran.

The complicated holding structures and investments made through layers of subsidiary companies make it difficult to discern who the real owner is or will be, and how much power he wields. “This is an example of a corporate consolidation within a corporate deal. It only adds to the process of shrinkage of diversity and lends itself to increasing homogeneity in news and entertainment. The fourth estate is now about revenue streams and corporate profits—really just real estate,” warns journalist P. Sainath.

Mukesh Ambani may yet make a triumphant return to media, but for Network 18 and TV 18, the road ahead is full of challenges, operating losses and stiff competition, not to mention the task of turning around a firm that has been pushed into a corner while trying to maintain editorial control and content credibility. If that were not enough, getting the regional markets to work to their favour and turning a bad asset into a viable business also lies on their shoulders now.

By Arti Sharma in Mumbai with Madhavi Tata in Hyderabad