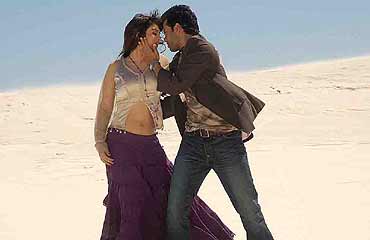 It kicks off with an ultra glam item number from Kareena Kapoor that goes: It’s Rocking. Unfortunately there’s nothing about Kya Love Story Hai that rocks. April, they say, is the cruellest month and last week has been specially cruel for film critics who had to grin and bear Lovely Singh’s (reportedly a former assistant of David Dhawan) supremely inane directorial debut.

The film is a patchwork rug—a random stringing together of silly scenes and stupid characters. To begin with, there are the irritating sidekicks who like playing dirty with dolls when they are not chasing women. There’s the hero Tusshar who reprises the same old tongue-tied lover act of Mujhe Kuch Kehna Hai. He suddenly decides that he needs to fall in love after seeing a friend weeping buckets at his girlfriend’s funeral. As if on cue, out of nowhere, Ayesha, the highly cutesy object of his desire, walks into the frame, in slow motion, hair blowing in the wind, face in soft focus. He falls in love, she falls in friendship. Silly girl is so self-righteous she won’t settle for a man (ie Tusshar) who has an architecture degree, but doesn’t work as he is loaded. So Tusshar decides to make a name for himself while she decides to marry a stiff, ambitious and efficient businessman (newcomer Karan looking as though he has mistakenly strayed onto the sets from a gym) who barks at people when they mispell his name and clings to his mobile more than his girl. All finally has to end well. The only saving grace is the song Gumsum hai dil mera that has a nice, old-world lilt.