Kushti In The Mud 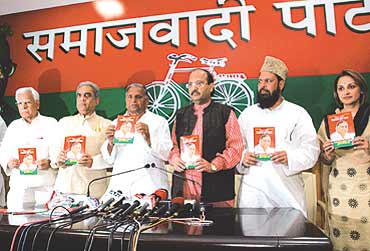 outlookindia.com
-0001-11-30T00:00:00+0553
When Mulayam Singh Yadav’s helicopter touches down at Dibyapur, 20 km from Auraiyan—a district carved out of Etawah—it is 3.25 pm. The dust swirls, a merciless sun beats down, but the crowd has swelled to a respectable number. It is, after all, home turf. This is one of the 62 constituencies which go to the polls on April 7 in the first phase of the long-drawn UP elections. Dibyapur falls in the Agra-Kanpur belt—which includes the badlands of Etah, Etawah and Mainpuri—considered the Samajwadi Party (SP) bastion in Uttar Pradesh.

It is Mulayam’s eighth and last meeting of the day, and even the enthusiastic slogans fail to energise him. The UP CM looks exhausted. It isn’t just the heat that is catching up with the wrestler from Saifai—it is the realisation that he is fighting the toughest battle of his life. "Softened" by an increasing association with the world of glamour and big money, Mulayam, says a one-time CPI(M) admirer, "seems to have lost his purpose in life, his cause. Now, it’s only about staying in power". But Mulayam won’t admit the odds are against him. He tells Outlook: "The battle is being fought by my people."

But when he addresses his audience, he sounds defensive: he talks of the conspiracy to remove him from power, to wipe him and his party out. "Woh kahten hain Mulayam mitao, Samajwadi Party mitao (they say finish Mulayam, finish SP)," he says, adding, "They want to remove this government which represents the poor, the farmers and women." And in a wild sweep, he promises free medicines, education and irrigation should he return to power.

There is a similar note of desperation in the speeches of SP activists. Voters are asked to stand by the party in its hour of crisis; speeches plead for forgiveness for past mistakes, and pledge to make good on old, unfulfilled promises. There is even a direct appeal to Mulayam’s core constituency of Yadavs to stand rock solid since it’s now "jeevan maut ka sawal" (a question of life and death).

But everywhere there is an undercurrent of resentment against the SP. Call it anti-incumbency. Some say it’s poor administration. Others point out that it’s the result of SP workers taking the law into their own hands. And now, the big question is who will gain from this disenchantment? Mayawati is the common perception. Her party, the BSP, won 14 seats in this belt in 2002 and is expected to better its tally. The bjp, according to pundits, will hang on to its 16 seats and the Congress, after Rahul and Sonia’s campaigning, might marginally improve on its four wins in 2002.

But for the Yadavs, who have enjoyed enormous political clout and have exercised muscle power "from the sachivalaya to the ration shop to the thana" as an IAS officer put it, the moment of reckoning has come. In Bamaripur, a Yadav-dominated village in the Auraiyan assembly segment, retired jawan R.N. Yadav defends the SP chief: "Look at the new roads and bridges, the monthly dole of Rs 500 for unemployed youth. We want Mulayam back." What about law and order? He looks embarrassed: "You know how it is—when Mulayam is chief minister, the Yadavs feel it is their government. He is a good man—it is just that some of his party workers have misbehaved."

At the district court in Kannauj (where the Lok Sabha MP is Mulayam’s son, Akhilesh Yadav), Madhukar Saxena, president of the district bar association, says that in the last few years most of the civil cases coming in from the surrounding rural areas relate to land-grabbing by Yadav toughs: "The general complaint is that no police station here will file a FIR against a Yadav —so they come to court. This is across castes and has created a strong anti-Yadav feeling."

Instead of countering these allegations by going for "clean" candidates, Mulayam appears to have reinforced the message of criminalisation, even when fielding non-Yadavs. In Bundelkhand, he has given tickets to Bal Kumar, brother of dreaded dacoit, Dadua; Srinivas Budholia and Girijacharan Rajput, brothers of two local strongmen, Rajnarain Budholia, a sitting SP MP, and ex-MP Gangacharan Rajput; and to Ashok Chandel, another alleged mafioso. The anger against lack of drinking water, irrigation facilities and motorable roads, compounded by lawlessness, has gained such momentum that all these SP candidates are finding the going very tough. 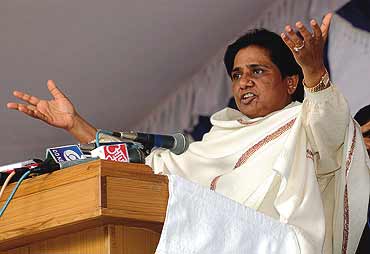 So, while a majority of the Yadavs, who account for 12 per cent of the voteshare, are holding fort, there has been a clear rift in Mulayam’s Muslim base—16 per cent of the state. In Kanpur, both Naeem Hamid, a member of the Muslim Personal Law Board, and Quri Sami, one of the town’s two qazis, admit Muslims are divided and will resort to "tactical voting"—favouring the strongest non-BJP man. This is borne out on the ground: though there is residual affection left for Mulayam, the overwhelming feeling is of having been let down. Even on the issue of appointment of Urdu teachers, the figure of 90 per cent for Muslims has dipped to about 50 per cent. Some Muslims, especially those running businesses, joined the SP for "protection", but they too found they had to pay the police.

Mulayam’s Muslim colleagues too have deserted him. Sitting MP from Muzaffarnagar, Munnawar Husain, recently joined Ajit Singh’s RLD; controversial SP minister Yakub Qureshi quit to join the new Muslim party; senior SP leader Rasheed Masood’s nephew, Imran, is contesting against the SP candidate in Muzaffarabad, with his uncle’s blessings. And sitting MP from Moradabad, Shafiqur Rehman Warq, a Mulayam loyalist for over two decades, has joined the RLD. Worse, another old-timer has jumped the sinking ship—former assembly speaker and ex-central minister, Beni Prasad Verma. His new party may get only a few seats but he could, say observers, hit as many as 15 SP seats, as he is a vital Kurmi leader.

The only bit of good news for Mulayam Singh is the success of his Kanya Vidya Dhan scheme—Rs 20,000 for every girl who passes her intermediate exams and whose parents’ income is less than Rs 35,000 a year. By and large the money has gone to genuine degree-holders. But "empowering" a few lakh girls may not be enough. Only a miracle can save Mulayam now. And if the feedback after the first phase is not too encouraging then it could be a tough fight ahead for the Samajwadi Party.