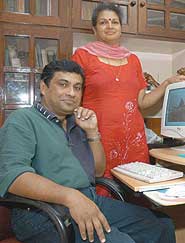 At the Centre for Earth Science Studies in Thiruvananthapuram, Kusala and C.P. Rajendran try to understand earthquakes and seismic changes. Their laboratory: the earthquakes at Latur, Bhuj and the Andaman and Nicobar islands. "You can say it’s our USP. Rajendran looks at cross-sections of quake relics and interprets them while I collate the latest seismological readings. This synergy helps us identify possible quake recurrences and assess seismic hazard," says Kusala. But they do admit to a fact we intuitively know, that earthquakes are impossible to predict. "We categorise various regions as quake-prone on a scale of probabilities and keep updating quake inventory.But the exact timing of a quake is still beyond human knowledge," says Rajendran.

Kusala manages one of the 10 Indian seismological observatories, located on the Kerala Forest Research Institute premises at Peechi in Thrissur, receiving data on quakes anywhere on earth.Geophysicists can predict the possible direction of shock waves and advise governments on where to construct a dam, a nuclear plant and so on. "Often, warnings are ineffectual. Neither the administration nor the people take it seriously," says Rajendran. India may not be able to undertake ambitious projects like Earthscope in California where they drill to the core of the earth, "but there must be more interaction among geophysicists globally for multi-lateral information flow", he says.