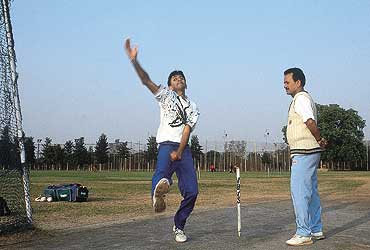 outlookindia.com
-0001-11-30T00:00:00+0553
Kunal Lal, 18, pacer and batsman: Picture Kunal Lal sharing the new ball with Stuart Binny, just like their fathers did that day at the Lord's in 1983. This would have come true in the under-19 World Cup, but Kunal missed making it to the team by a whisker. This Class XI student leads his school team and made it to the North Zone under-19 team after taking 19 wickets for the Delhi junior team.

"Nobody ever forced me into cricket. I just took a bat in my hand a long time ago and started playing. Daddy used to play county cricket in Durham and I used to watch him. When I was 12, I was in their under-14 team. After two years when I went back, I played the under-16." Kunal is certain he will play for India if he has a couple of good performances with bat and ball. "There are no pressures as such apart from the one to give my 100 per cent. My father has been a national selector for three years, but I don't think he's asked anybody for any favours for me." He has been visiting the MRF Pace Academy since 1999 to seek guidance from Dennis Lillee. "What I have learnt from Lillee is that you cannot cut down on your pace to swing the ball. It will swing only if you have pace."

Says Madan: "I want him to be an all-rounder, and better than me. In fact, I want him to be a bowler all-rounder—he should bowl first and then get 40-60 runs. My being a selector is immaterial. If he doesn't deserve to be at any level, I'll be the last person to put forward his name," he says, adding that it would take a couple of years for Kunal to break into the national scene.

Madan's elder daughter Kanika is a cosmetologist in the US. "I wanted her to be a tennis player but she was never keen about anything to do with sports. She cannot even hold the tennis racquet."