As cheesy in its superhero genre as CID is amongst television thrillers. 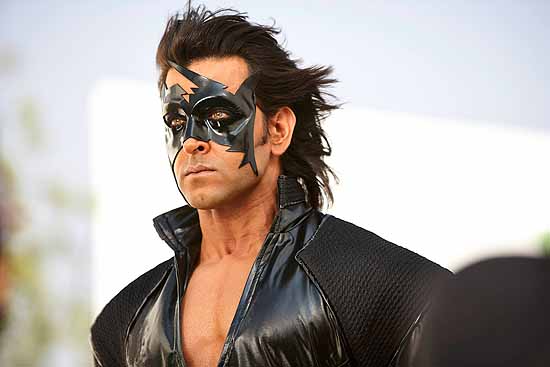 There are many things about the Krrish series that have confounded me, besides, of course, the obvious: between Krrish and Krrish 3, where did Krrish 2 go? Is Koi Mil Gaya actually Krrish 1 and hence Krrish is Krrish 2? Even as I sit down to write on Krrish 3, I wonder if it’s spelt with two ‘r’s or one ‘s’? Long after the film got over, I continued to call its villain Carl rather than Kaal. But do these significant details really matter? The Indian superhero franchisee is not about asking questions or getting the finer points, but just taking in all that comes your way unth­inkingly. In the process, you could get bewildered and ench­anted, you could laugh at the inanities or get simply exasperated and bored. But it’s like a road-roller that just won’t stop, that will continue to roll on to set new benchmarks at the box-office.

Scientist Rohit Mehra (Hrithik 1) makes some filter that would use solar energy to revive the dying moneyplant. Remember this ‘dimaag wala’ filter well because it plays an important role in the climax. Meanwhile, Rohit’s son Krrish (Hrithik 2), when he is not getting termination letters on his various jobs, is the Mumbai-saving superhero, with a journo wife Priya (Priyanka) in tow. Their adversaries are a paralysed evil Kaal (Vivek) who posseses ‘telekinetic’ powers (whatever they may be) and his form-changing henchwoman Kaya (Kangana). Then there’s some more mumbo­-jumbo doled out in the name of sci-fi—a virus outbreak in Namibia, its antidote, mutant DNA and an army of maanvars (hybrid of humans and animals, if you will).

There are some scenes that thrill, like that involving the disappearing ice-creams, but that isn’t saying much, because there are so few of them. The film tries to raise the bar for Bollywood superhero films with its better-than-the-rest SFX and cinematography, but remains thoroughly clunky at heart. The content and characters, the story-telling and dialogue are tacky. The worst is the music, normally a high point of Roshans’ films. There’s not a single song that stays except, perhaps, the below mediocre Raghupati Raghav Raja Ram. By and large, Krrish 3 is as cheesy in its superhero genre as CID is amongst television thrillers.

Hrithik hams his way through the film, especially in the role of the father, complete with peeling pancake make-up and that now-familiar, irritating way of speaking. Priyanka is lacklustre and in the initial scenes keeps saying ‘ok papa’ at the drop of a hat. Vivek makes nasty faces and follows Priyanka in mouthing ‘father’, ‘daddy’ and ‘papa’ alternately. Rajpal Yadav comes and goes in the blink of an eye. It’s Kangana who is the toast of the cast and the film with her gam­ine presence. She was my only takeaway.