In a role he's new to, he'll have to stand up to the PMO babus 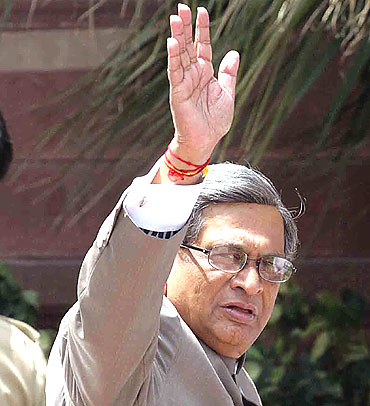 Somanahalli Mallaiah Krishna's passion for tennis runs so deep that he nearly missed a break budding politicians anxiously chew their nails for. In the early 1980s, when Indira Gandhi wanted to induct him as a junior minister at the Centre, her aide couldn't track him down to convey the news—he was away in Hyderabad playing a tennis match. It took the prime minister's office considerable effort, in those pre-mobile days, to fly him down to Delhi for the swearing-in.

All of 77, and still passionate about his tennis, Krishna's return to Delhi this time was planned, informed as he was in advance about a berth in Prime Minister Manmohan Singh's cabinet. What wasn't known was the portfolio he was to handle. Sources have it that Manmohan wanted Krishna to be finance minister, just as he had when P. Chidambaram was shifted to the home ministry after Shivraj Patil resigned in the wake of 26/11. But party chief Sonia Gandhi felt Pranab Mukherjee should handle both finance and external affairs in the months before the general election. Her wish prevailed.

In the summer of 2009, as the exercise of choosing the Union cabinet began, Sonia...