Tiger, Dawood still at large, a verdict in 13 years. Justice delayed, but solace for some. Updates 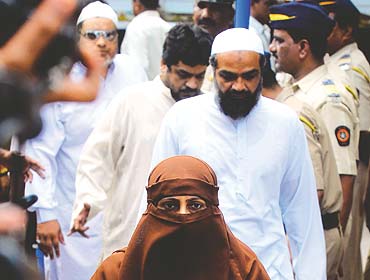 outlookindia.com
-0001-11-30T00:00:00+0553
Exactly 13 years and six months to the date after the deadly RDX bombs went off across Bombay on March 12, 1993, the designated TADA court finally began delivering the verdict. As the trial, so the judgement—long, staggered and complicated. As judge Pramod D. Kode told a waiting city what it so desperately wanted to hear, it became apparent that the full verdict with sentences for those found guilty could take months. The judge had declared on the first day of delivering the verdict that he would take up the 123 accused in batches of eight.

When the verdict came in the silent TADA courtroom, it was matter of fact. Yakub Memon, Essa Memon, Yusuf Memon, Rubina Memon were pronounced guilty as charged; Suleiman Memon, Hanifa Memon, Rahin Memon were acquitted. Memon's father Abdul Razzak, facing similar charges as the rest of the family, died in 2001. The charges they faced, among others, were under Section 3 (2)(ii), Section 3(3) and Section 5 of The Terrorist and Disruptive Activities (Prevention) Act that mainly deal with abetment to terrorist activities. On Day Three of the verdict, accused number 9, Mohammed Ghansar, charged with conspiracy and placing the bomb-laden scooter at Zaveri Bazaar, was pronounced guilty. Unlike the convicted Memons who face prison sentences from five years to life, Ghansar faces the death penalty.

Eleven others in the trial can be awarded the death penalty while most others are likely to face the maximum sentence of life imprisonment. However, arguments over the sentences did not begin as scheduled on Thursday. The staggered judgement was initially opposed by public prosecutor Ujjwal Nikam in court on the grounds that it was "unprecedented". To this, Judge Kode retorted: "The whole case was unprecedented."

Post the judgement, the Memons are a divided family—Yakub's wife Rahin is a free woman, Suleiman walked free while wife Rubina was convicted because one of the cars used to plant the bombs was in her name. There was a touch of drama too as the Memons came to terms with the verdict, particularly the reserved and well-behaved Yakub. He was shown as arrested in Delhi in August 1994 but Yakub claimed to have surrendered to Indian authorities a month earlier. He lost his cool when the judge refused a week's leave to his convicted sister-in-law Rubina, who wanted time to settle her children before going back to judicial custody.

A CA by profession who has spent all these years in Barrack No. 10 of the Arthur Road jail with his books for company, Yakub shot back at the judge in Hindi, lamenting a system that turns innocents into terrorists while the real criminals are still at large. "We are tired of everyone, of lawyers. Innocents are being declared terrorists...this whole thing is a drama. We were warned—if we tried to do Gandhivaad, we would end up being accused as terrorists. It took 13 years for me to realise this."

Later, he justified the outburst saying he was very angry and taken by surprise at the judgement against him and the family. The Memons are facing this because the authorities "cannot catch the real persons", he declared, drawing parallels between his story and Hindi blockbuster Deewar. Yakub clearly saw himself as the more upright brother who took his parents along while Tiger Memon, the alleged mastermind, was the wayward one. The entire Memon family had flown out to Dubai by March 12, but everyone returned except Tiger Memon who reportedly advised Yakub and others that they would be done in by the Indian authorities. There were reports that the CBI might have brokered a "deal" with the returning Memons: leniency for information on key conspirator Dawood Ibrahim, Tiger and Mohammed Dossa. The CBI and the Mumbai police have denied any such deal but the sudden return of the family remains an inexplicable footnote in the trial.

And Tiger, who was a bank clerk in the '70s and early '80s before joining Dawood's smuggling business, remains a missing link. The Memons' apartments at Mahim's Al Husseini building was the green room of the soon to be played out terror drama as vehicles brought in containers of RDX and ammunition. The bombs were put together over several dark nights in late February and early March 1993. Cars and scooters were packed with the bombs and Tiger's henchmen, prominent among them Mohammed Ghansar, told to park the vehicles at pre-decided locations. 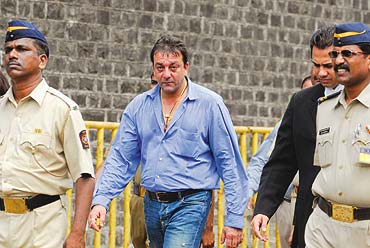 As for Sanjay Dutt, despite the high public interest in the actor's fate in the TADA court, he will have to wait at least a month. Listed as Accused No. 117, Judge Kode will take some weeks before delivering a verdict on Dutt. The actor, meanwhile, has reportedly cancelled public engagements and clamped down on shooting schedules. More than the conspiracy charge, Dutt must fear for the charges made under the Arms Act for illegal possession of weapons and ammunition, as also destruction of such weapons. Dutt's legal team has previously stated that he acquired the AK-47s and grenades for self-defence after his late father, the then MP Sunil Dutt, received several threats to life during the '92-93 riots. However, the Mumbai police which investigated the case and the CBI believe there is enough evidence of calls made to and from Dubai. Dutt also met gangster Abu Salem during the transaction of weapons.

While the judgement has been welcomed by Mumbaikars, police investigators like then police commissioner A.S. Samra and joint commissioner M.N. Singh and politicians of all hues, the CBI itself has reserved reaction till the complete judgement is delivered. To many Mumbaikars, particularly relatives of those who died or were injured, these convictions will mean some closure on a case that tortured the collective psyche of a city till other equally deadly bombs claimed lives. But for others the question will remain: of what relevance is justice that did not see the prime accused—Tiger Memon and Dawood Ibrahim—stand trial?

Those Who Got The Rap