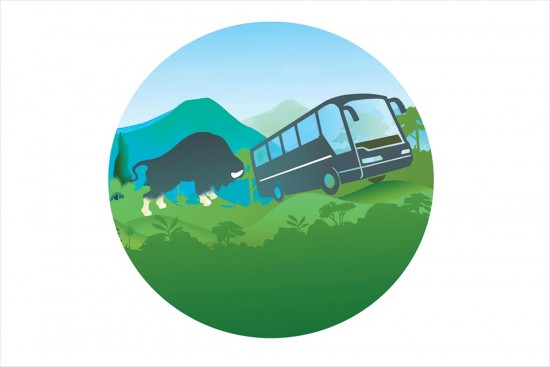 Being chased by a bison in the wild does not make for a happy dream. Being chased by a bison in the middle of a busy street is rather ridiculous. But it was scary when it happened in Kodaikanal. He was beautiful, dark with white stockings, and like a bull who had been blown up to giant size, peacefully feeding on grass (?) behind a car when our bus passed him. The question being: who’s taking whose land? Have the weekend tourists from all over Tamil Nadu and Kerala and their vehicles squeezed out where the wild things are or have the wild things been sprinkled all over this American missionary town and beloved hill station? Hard to tell, which is why we were peppered with stories of bisons jumping eight feet and smashing cars to bits. The destruction of peace happened right then. I was busy trying to record the creature with my iPad when a car honked rudely and the beast turned around. As it advanced towards me, my mind froze at the elaborate power of its horns, but the voice of my friend woke me up. “Run!” he said quietly, just like in one of those viral horror videos. I ran and boarded the bus. The beast kept chasing us, but so ­lazily, it seemed like a prank.

Kodaikanal International School (KIS) is a hilly stretch of Oregon in Tamil Nadu. Its current principal, Corey Stixrud, is from that part of the Pacific Northwest and went to college in Lewis and Clark in Portland, but he’s actually an old Kodai hand as his father taught at the school too. If you thought all hillside boarding schools in India traced themselves back to the British, KIS will come as a surprise. And with it, the whole town of Kodaikanal. As Corey told me, the British took a look at...