Kollywood to Bollywood, there's a new lingo in the vanity vans. The Mallu girls are here. 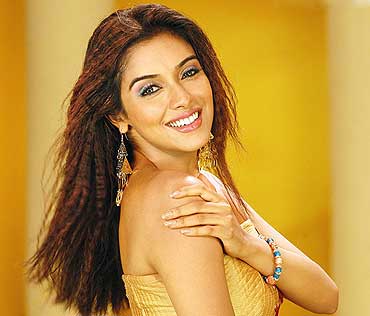 outlookindia.com
-0001-11-30T00:00:00+0553
They have had temples built in their honour, love letters written in blood. On Kollywood’s film sets, the hero may be the next neta-in-waiting, but it’s the heroine (aka "the love interest") who gets the box-office pulse all aflutter. And for a while now, there’s been a new buzz going. Apparently Punjabi season is out, the new wave has a distinct Kerala flavour to it. Yes, yesterday's dowdy ducklings have on the sly bloomed into swans. As one big-ticket producer put it, "Mallu girls are rocking!"

The accolades aren't surprising, considering the star turn by Malayali actresses like Asin and Nayanthara. Other stars like Meera Jasmine (2004 National Award winner for the Malayalam film, Padam Onnu Oru Vilapam), Kavya Madhavan, Navya Nair, Priya Mani, Bhavna (a hit in Telugu films) and Sneha also have Malayali roots and a growing market outside Kerala. Having honed their craft in Mollywood, they have been lured to Tamil Nadu and Andhra Pradesh where the moolah is a lot more attractive and the audience base a whole lot bigger. 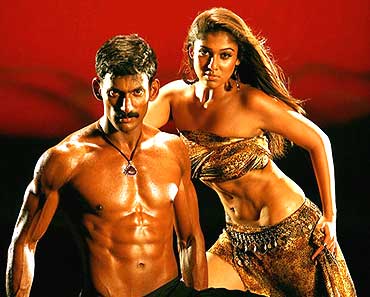 Meera Jasmine, for instance, gets Rs 10-15 lakh for a role in Malayalam cinema but rakes in Rs 40-50 lakh in Tamil and Telugu films. Asin (star of Aamir Khan's soon-to-be-released Ghajini) and Nayanthara are in the big league already, commanding between Rs 75 lakh to Rs 1 crore for a film.

What caused this late migration? Well, besides the pay and the fans, the truth is that since the late '90s, Malayalam has witnessed a startling drop in quality cinema (one reason being the void created by the deaths in quick succession of auteurs like Aravindan, Padmarajan and Bharathan). Tamil cinema, meanwhile, was seeing a surge of new talent in scriptwriting and directing, making it a magnet for talented actresses. 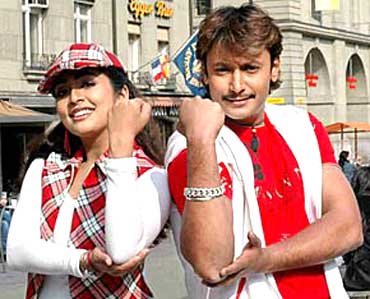 The Malayali actress, though, is an unlikely candidate for the dominant-force-in-South-Indian-films title, more because they couldn't be further from the typical Bollywood heroine, known for her bikini-worthy bod. In fact, there was a time when Malayali actresses were caught between two boats—the sati-savitri or the Her Nights tramp, a figure further perpetuated by the Mollywood soft porn factory films of the '80s. (The latter enjoyed a brief revival in movies starring Telugu actress Shakeela in the mid-'90s but has since died out again.) Nowadays, there's an altogether different buzz about the Malayali heroine. Art critic Sadanand Menon says "there is a demand for acting and emoting capabilities, in addition to dancing skills, in South Indian cinema now". He adds, however, that historically it hasn't taken long for South Indian heroines making the crossover to Mumbai to get slotted into "the plastic image that Bollywood heroines have". He cites the case of Sridevi "who could even trump Kamalahaasan, but once she went to Bollywood became known as 'Thunder Thighs'."

But in Tamil and Telugu films too, acting talent alone isn't enough. Which is where Mallu girls are scoring again—they are now perceived to be more glamorous, something even Bollywood is waking up to. Asin, who has done just one Malayalam film, and Nayanthara, who has done 4-5, are already looking beyond South India and blithely embracing the world beyond. Asin is all set to take on the life of a Bollywood superstar after Ghajini; Nayanthara has emerged as a no hang-ups hottie wearing a bikini in Billa, doing a sexy number with Vishal in Sathyam, even doing a lip-lock with Simbhu in Vallavan.

Says Nayanthara, who was quick to drop her village belle image after the crossover: "One has to be modern. In the glamour game, you can't have boundaries." Megha Nair, a lissome 20-year-old who debuted earlier this year opposite Satyaraj in Thangam, takes it all in stride. "Mallu actresses today are cool and bold," she says. It's the same with "accidental actress" Padmapriya, an MBA who in an earlier avatar worked with General Electric: "For me, wearing a mini-skirt is as easy as wearing a sari. Sex sells whether you are size zero or size 10." 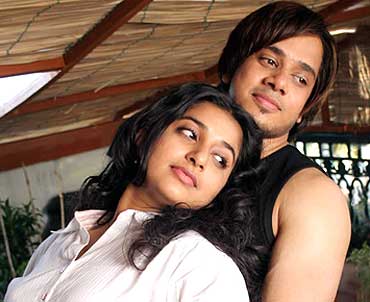 Padmapriya also points out that Malayali heroines find it easy to make an immediate impact in Tamil/Telugu cinema because "it's easy to adjust—there's a similar culture, similar thought process, similar language". Making the move to Bollywood, though, is not as simple. Megha agrees, "Things are different in Bollywood...the audience is different, the films revolve around style. The stars have to be physically fit and in shape."

Yes, size still matters. While Kollywood heroes like Surya and Vishal are into six-pack abs, the audience here still prefers its heroines to be "gundu-gundu" or buxom. "When I even mention that I am going to lose weight, there is a chorus of disapproval," says Megha.

The "Mallu girls" are also not bound by the constraints imposed on local girls (a fact true for actresses from North India too). As a successful Tamil TV show producer says, "Outside heroines have always dominated here. We are still a conservative society which frowns on girls joining the industry. The Mallu brigade is the latest, they have taken over...."

Thiruvananthapuram-based film writer C.S. Venkateshwaran points out there was a time in Kerala too when girls were stigmatised for joining films. He recalls a period when Sharada, a "Telugu outsider", ruled Malayalam cinema. But girls from newly affluent families, with their Gulf money and upbringing, have shed these inhibitions. Attitudes in general have also changed since the '90s. Actresses like Asin, Nayanthara and Megha started as models. Their previous careers were not just stepping stones but also conditioned them into accepting that "exposing" comes with the territory.

Says Kerala-origin actress-turned-director Revathy, who's done a range of films across languages: "I have never thought in terms of regional labels. But Kerala has a culture of state competitions for dance, music and theatre. This brings confidence and an easier entry into films. That's why you see more Malayali girls in films nowadays."

Kollywood actor-director R. Parthipan, one of Asin's co-stars in her debut Malayalam film Narendran Makan Jayakanthan Vaka, has the final word: "Bharatiyar (the Tamil poet) said Kerala girls were very beautiful. The writer Sujata too has commented on the same lines. We can't help it, we are a culture that respects our elders!"

'The US Wants India In Afghanistan'