Is the end of the Wright era really nigh? Where else can we get that alchemising glint of steel? 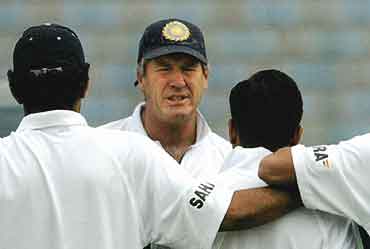 It was no surprise to see John Wright balk at the suggestion of a profile. "No, no, no," he said, "but, yes, we can talk about this (the India-Pakistan) series." That is just the way the man is, a throwback to another era when the sky was bluer, the flannels whiter and real men were self-effacingly modest, much like the man who has flowered under him, Rahul Dravid.

In an age when national cricket coaches are fast acquiring the status and star value of football coaches, Wright remains unassuming and unobtrusive, without a media column or a capsule on television. He seldom saunters in to address a press conference after a triumph. Mostly, he walks in dutifully to spare the captain a potential grilling.

When Wright's stint with Team India is evaluated—and it will be pretty soon if he leaves, as he is said to be planning, after this series—the highlights would be the triumph over Australia in 2001, the trip to the 2003 World Cup final, the Test and ODI series victory in Pakistan.

Yet, that would be doing him gross injustice. Wright's contribution to Indian...