An embarrassing cliché-ridden film, with corny songs that sound like elevator music, poor script and dialogues 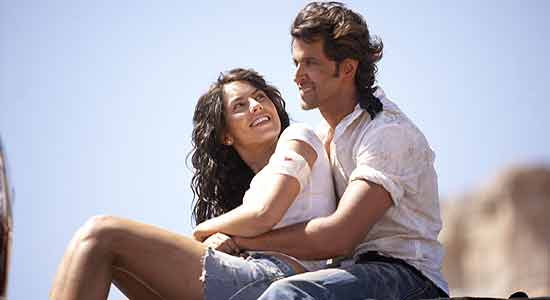 India and the Indian have gone global and Rakesh Roshan wants a piece of it. More important, Roshan is determined to launch his son Hrithik’s international career, making him the brand ambassador of the new and shining India.

So in Roshan’s Kites, directed by Anurag Basu, we see Hrithik doing salsa, jumping over running trains, driving in one car-chase sequence after another, shooting guns, giving corny romantic glances, kissing and making out with the Mexican soap star Barbara Mori, and walking in the desert of Nevada, as if he was the last man alive. We see Hrithik’s chiselled hairless body, glowing as if he has had an oil massage and so many facial close ups that we can almost look inside his nostrils.

The message is clear: here is a tall, lanky, good looking Indian who can speak English (though his acting abilities are questionable). He almost looks white with his green eyes, or a Latino. If Hollywood can accept Penelope Cruz and Antonio Banderas, then surely Hrithik can make it big there. The only problem is that Cruz and Banderas were introduced to America in classic international films by Pedro Almodovar. Kites, on the other hand, is an embarrassing cliché-ridden film, with corny songs that sound like elevator music, poor script and dialogues.

All the Indian characters are caricatures. Kabir Bedi (Bob) and Nicholas Brown play the flashy casino owner and his creepy son. They cut off the ears of those who cheat in their gambling establishment and live in a mansion left over from Subash Ghai’s Pardes days. Nobody is clean. Hrithik’s Jay and Mori’s Natasha are gold-diggers who’re after Bob’s wealth. Jay is a dance instructor, but supplements his income by marrying women to get them green cards. At the beginning of the film, he proudly declares he’s married 10 women. Yet we’re supposed to like him and the immigration authorities haven’t caught up with him!

Kites’ production design is reminiscent of Sergio Leone’s spaghetti westerns. One almost expects Clint Eastwood to show up on a horse. The film has a clean, expensive, glossy look. It’s well shot and edited. But none of that matters, since the plot is so contrived and it’s hard to empathise with any character.