Bring the five-star experience home. Gourmet savants are now bringing their business to the family kitchen. 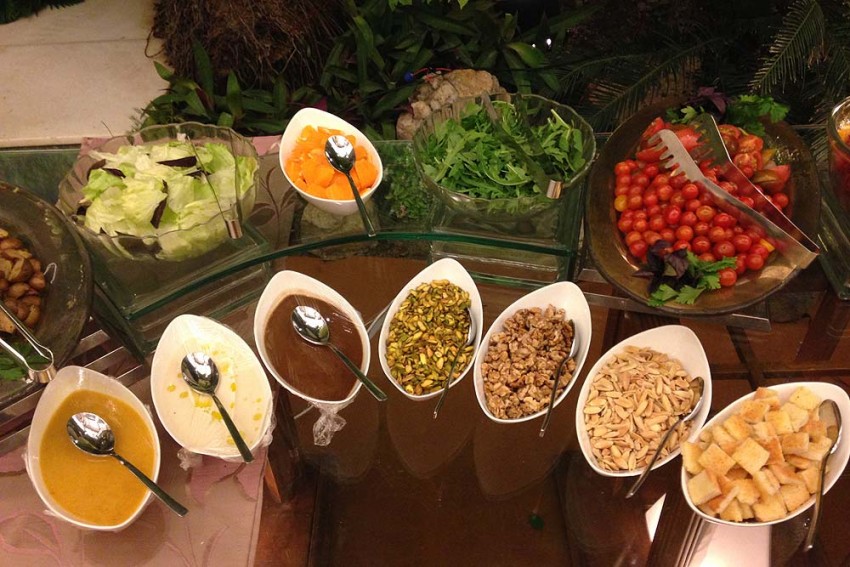 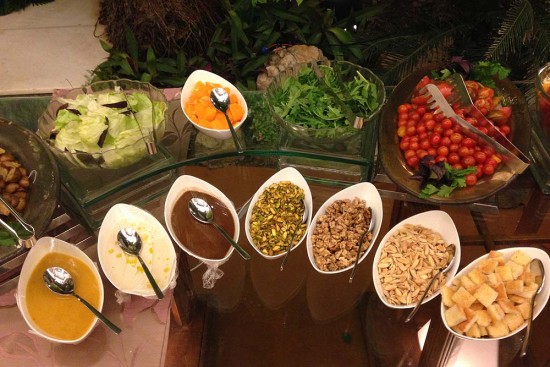 Zomato, the frien­dly online food-delivery app, recently put out a survey saying Indians order in chicken biriyani, butter chicken, pizzas and burgers the most. Now the question is: would you rather order the same north Ind­ian fare and desi Italian or, for a change, like to go in for some goat cheese mousse and Beluga caviar from the Caspian Sea, brought to you by the finest gourmet chefs in the country? Oh, and they would also like to take over your kitchen to set up the evening for you.

Find yourself blessed now, busy souls. For if you find that your dinner isn’t on the table when you are back home or you have a birthday or an anniversary dinner to plan, all you need to do now is to get a gourmet chef to take over your kitchen and transform the dining experience. From the perfect night-out for two to a sit-down for a group of people, these five-star chefs have all the tools in their kitty and are dishing it out exclusively at personal get-togethers now.

And it doesn’t cost as much as a trip to a five-star restaurant either. Chef Elang Kumaran of Field Caterers in Chennai, one of the latest players in the city’s food scene, says “the cost depends on the cuisine and the portions. Say, for a meal, it could start with Rs 600 per person and go up.” And way up too. The base price for a five-course service menu by Field Caterers is about Rs 3,000. And it’s all new-age too, so no gigantic pots and pans, no make-shift kitchen in the garden or the balcony. The whole exp­erience is made interactive. Chef Elang mentions that the guests play their role too while the masters of the chopping boards hone in on specifics. “We sit and map out the cuisine, the dishes etc. We also give them the list of ingredients and take them shopping. It’s all different and makes it more involved,” he says. Ingredients are also bought by the guest, accompanied with a chef, of course, so as to minimise/maximise spices in a particular portion to cater to specific tastes. 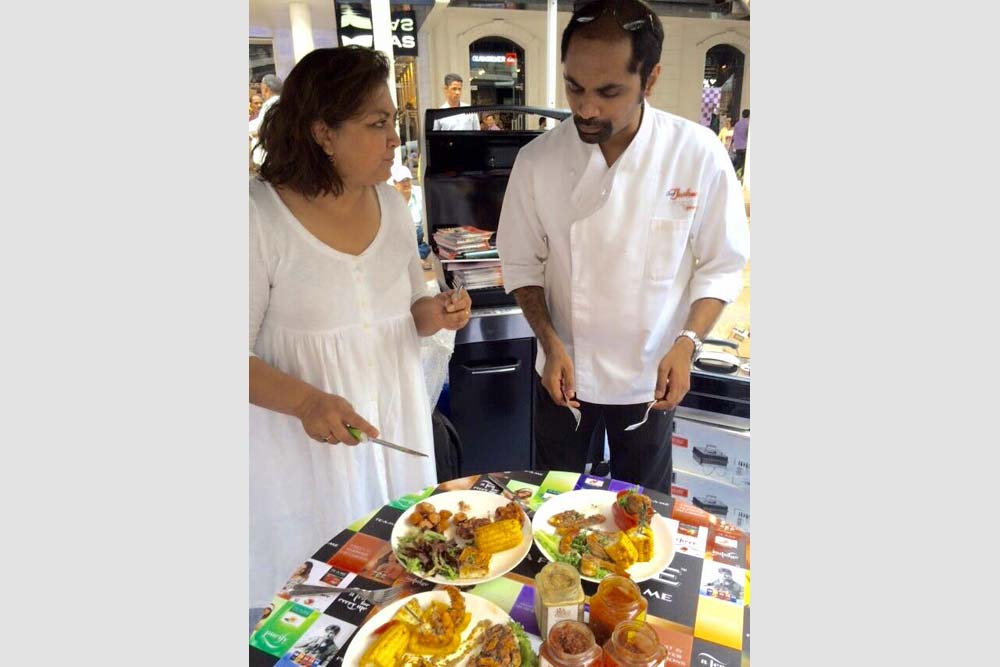 Field Caterers also offer another unique tie-in—with your favourite restaurants which gives you the option to mix-and-match orders. “We have the greatest bra­nds under us,” says Elang, and you wouldn’t disagree. Bombay Brasserie, Copper Chimney, The Marina and The Tapas Bar are some of the names on the list. And though they entered the market only five months ago, Elang says things are looking up (“there has been great growth in the business”).

Indeed, there is a growth of gastronomic delights in other cities too, with chefs in Mumbai, Bangalore and Delhi serving up a storm in some of the city’s kitchens. Known to be a stickler for det­ails like the spellings on the menu, Abhijit Saha is founding director and chef of Avant Garde. The 41-year-old’s venture owns and operates two premium restaurants in Bangalore, Caperberry, on Dick­enson Road, and Fava, in UB City. The former came first, close to seven years ago, under the Bespoke Catering banner and Fava came up a year later. But all the buzz is in the home catering business. “It’s very simple. Once our guests call us, we find out their requirements in terms of type of event, theme, choice of cuisine and menu and if they have any other specific requirements like music, decorations etc. We then provide them with complete event solutions so that they can unwind and enjoy their party,” he says.

He says their clients “enjoy the comfort of their home for entertaining their guests”, mentioning that it gives their hosts “the freedom to serve their own liquor” as well. With eclectic items like the Mahon cheese jelly on the menu, he says many ingredients are sourced from overseas. “Since we provide a lot of variety in terms of cuisine, we also buy many imported and artisanal ingredients from Italy, Spain, Japan, Lebanon and Tha­i­land,” he says while also listing various specialised farms among his wide network of suppliers. Their home catering menus start at Rs 1,500 plus taxes per head for a dinner but can go up depending on “whether there are pre-dinner canapes, how elaborate and luxurious the menu is, live stations etc”. Elaborate is the buzzword here. Chef Abhijit says that while CEOs enjoy “business entertainment parties” when their international clientele come visiting, “one of the most interesting catering-wise was for a French guest who wanted to celebrate his wife’s birthday with a romantic dinner for two, bringing home the Caperberry experience with an 18-course dinner”. 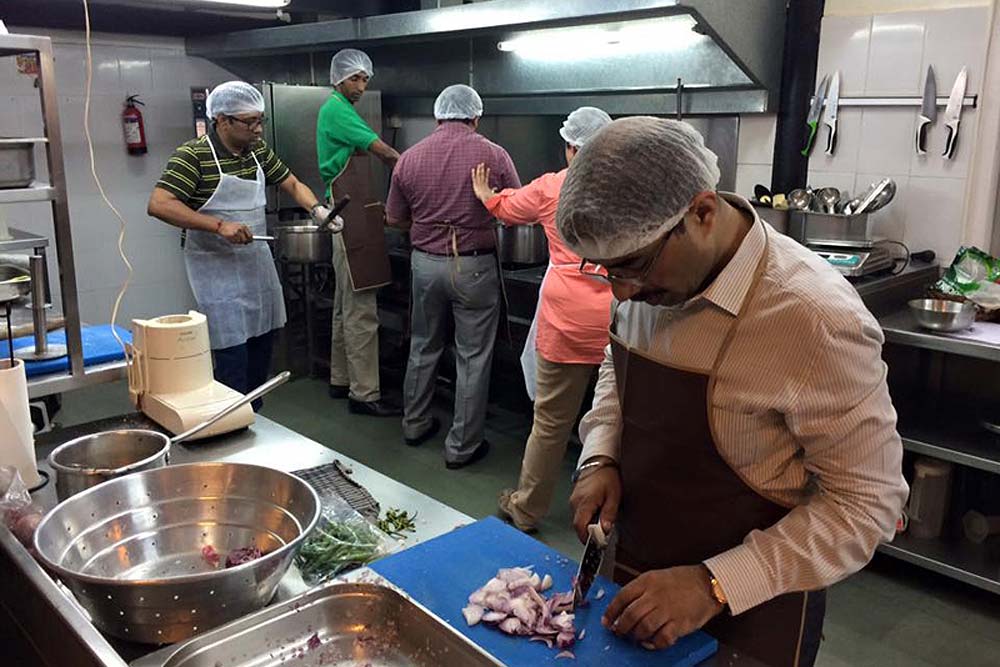 Small Slivers The Silverspoon staff turn on the magic

But how does an aam aadmi get a master chef to cook an 18-course extravaganza for him? While their services are available via their websites on the internet, Chef Abhijit says publicity is mostly by word of mouth and personal recommendations. It is how chef Joshua D’Souza and Neha Manekia started out as well, in 2012, with Silver­spoon in Mumbai, their first few clients being friends and family. The couple had been hoteliers for over five years before moving to India from Bahrain (where Joshua was with the Ritz-Carlton). They found that the home catering experience wasn’t much of a thing here with “not a lot of good quality on show” says Neha, “mostly home chefs dabbling in the food business”. Three years ago, Silverspoon started out with three people. Now, a crew of 15 working out of Lower Parel will serve you the food you expect at a five-star hotel. The experience will set you back by about Rs 900 per person for about 50 people, and can even stretch to Rs 2,000 on select orders.

It’s a growth story that has provided a learning curve, every new challenge setting the bar higher. From decking up a yacht to settings of any kind, “we are used to consistent change”, she says, adding that different venues also allow you to develop your own “tips and tricks” in the game. The other challenge is getting someone else to hand over their kitchen to you, something the couple are used to. “We generally prepare the food at our place and finish it at the client’s,” says Neha, adding that “we cannot take over the kitchen, create a mess and just leave. In most cases, we leave the kitchen cleaner than we found it.” 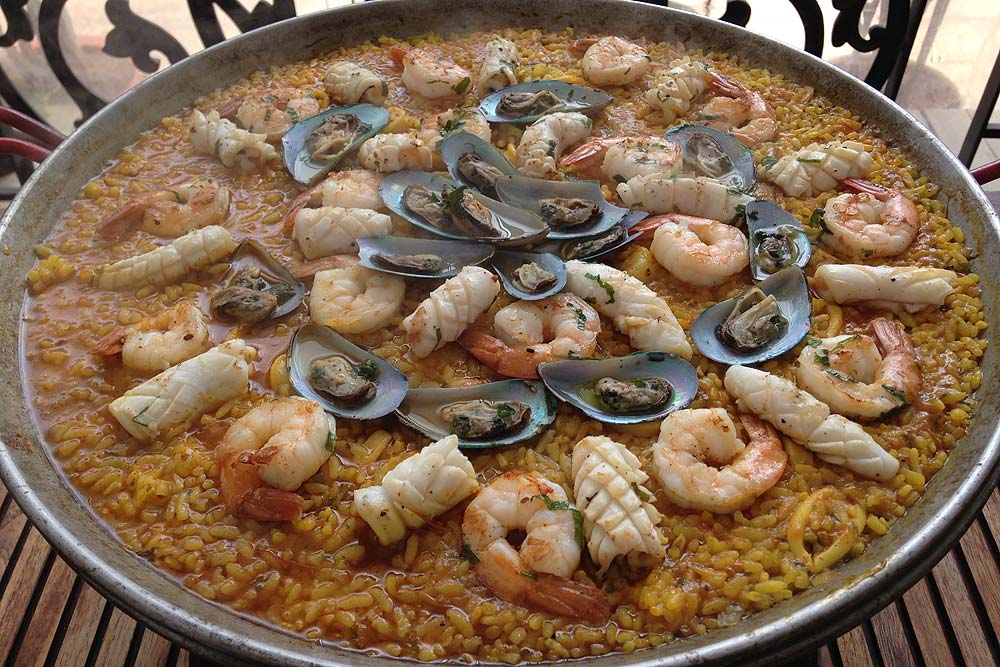 Dip In A paella by chef Abhijit

A mess is not the norm for The Yum Yum Tree either. The Gurgaon-based venture’s CEO, Sanjeev Kumar, worked in the hospitality sector for “between 5-7 years” before deciding to branch out into catering, “where one builds bars or restaurants acc­ording to one’s choice and develops food menus based on innovations, where revenue is according to the choice, and you cater different kinds of food on varied occasions”. Sanjeev says that while most of their client requests are for weddings, some 10-15 per cent are for corporate parties and the rest are social gatherings and get-togethers. They cater all across India with their base kitchen being in Gurgaon with, again, a flexibility that all­ows them to juggle wood-fired pizzas and live sushi bars with chaat from Calcutta, Ambala and Benares.  “We get people from these cities to prepare all this for us. Indoors or outdoors, in the garden, lawn, anywhere really. Even if they want to host a party in their farmhouse, we can arrange for it,” he says.

As a business, the ride has been pretty “smooth”, he says, noting that there aren’t many downs as such, citing an essential requirement, “experience and knowledge of where to procure all the materials from”. He mentions that there aren’t many limitations as such and “if the products are unavailable then we get them outsourced”. The rates do vary from order to order but it generally costs “Rs 2,500 per head for a gathering of about a hundred people”, he says.

In an inventive market such as the five-star home catering service, chefs agree that what is paramount is quality. Neha cites a “heavily price dependent industry” which relies on raw produce as one of the only deterrents, if any. Abhijit says they have some days “where there are multiple events” in a mad rush while on other days “we have nothing at all”. He also has another gripe, saying that some meals are best served in his own lair. “There are certain dishes which can be done better in our restaurants than at the catering venues, particularly if there is a lack of kitchen space.” Kitchen space and seasonality not withstanding, though, the industry itself is on the up and up. It’s not just about the food anymore, but an experience, as gourmet dishes are  a “kind of theatre served with your food”.

By Siddhartha Mishra and Aheli Basu

“Another Corridor Should Have Been Chosen”