No longer is a poky, airless cooking space relegated to a forlorn part of the house. Urban Indian kitchens turn chic. 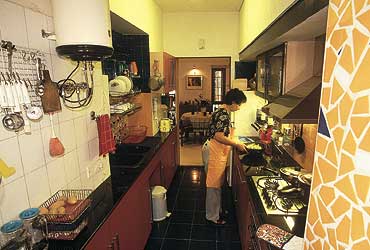 An employee of the department of information and cultural affairs in the West Bengal government, Mukherjee spent four months trawling the Internet seeking the right gizmos to realise his dream cooking space. Another month-and-a-half was spent designing it himself. The basic makeover set him back by Rs 60,000—for the tiles, the woodwork, the counters and charges for labour. The rest was spent on spiffy gadgets—chimney, hob, washing machine and refrigerator. "You can't overlook the kitchen, it shouldn't be the black spot in your house," says the extreme kitchen-conscious Mukherjee.

No longer is the kitchen the most frowsy part of the Indian home. "It is finally getting a much-needed facelift," says Delhi-based celebrity chef Roopa Gulati. Indira Jayakumar of Chennai spent Rs 2.5 lakh setting up her fabulous modular kitchen built around a huge centrally-placed Faber chimney and hob, with a separate breakfast counter. Her open kitchen flows into the dining space and is separated from the living room, not by a wall, but by a glass partition.

And it wasn't just his kitchen at home that Mumbai-based adman and foodie Prahlad Kakkar did up but also the one at office. His reason: "The kitchen is the heart of the office. If we're not working, we cook." He spent Rs 4-5 lakh doing up his office, "most of which went into the kitchen". Ravi Sabharwal, owner of a Delhi-based bookstore, too has a fully functional alcove kitchen in his shop. Split airconditioning, glazed tile mosaic, faux ceiling that lets in the light and other mod cons spruce up an area just 4 ft x 8 ft with a moving space of about 2 ft x 6 ft. "It is a perfect kitchen," says Sabharwal with obvious pride. It also doubles up as a dining area.

What is it that is fuelling this latest obsession with the hitherto-neglected kitchen? Indians are usually known to splurge, often vulgarly, to dress up their "drawing rooms" with gaudy sofa linen and gilt-edged curios on teak showcases. Why has the drab and unadorned kitchen suddenly stepped into the limelight? Gulati has an inventive analogy. "At one time the kitchen's place in the house was akin to wearing a nice sari with a torn petticoat," she says. Now even the "petticoat" is designer and perhaps more expensive than the sari itself.

Like all trends, urban kitchen consciousness is also driven by the desire to arouse neighbour's envy, owner's pride. Of course, disposable incomes and a greater middle-class indulgence in all things designer too helps. "Doing up the kitchen was a productive way of channelising my hard-earned, carefully saved money," says Mukherjee. Smaller, compact apartments spurred the need for fancy designer kitchens. "The kitchen was always away from the house but today it has lost that traditional sanctity," says Bangalore-based architect-turned-cartoonist Nala Ponappa. "Now it can't be secluded and therefore be untidy or unaesthetic," says Jayakumar.

Hence the need to make the kitchen look as appealing as the rest of the house."Modular kitchens help you pack in as much as you can in as little space. The western trend of organising the kitchen professionally is coming in now," says cultural historian Sharada Dwivedi. Neat, simple lines 'conjure up' space and let in enough air and light to relieve kitchen claustrophobia.

The new Indian kitchen is also no longer the domain of just the household cook. With domestic help becoming increasingly expensive and harder to get, more and more people are taking to cooking themselves. Ergo, a functional, comfortable and pleasant environ is a must where cooking is a comfort, not a chore. "The kitchen has almost become a workstation. It's as important as the study or the office," says Delhi-based interior designer Nandini Dhanda. Chefs are the new breed of celebrities, cooking is de rigueur, and families are spending time cooking meals together. "It's a big thing to use the kitchen with a sense of pride," says Delhi-based architect Gautam Bhatia. "Earlier it used to be a more detached relationship," People are also experimenting a lot with international cuisine—which too calls for a certain amount of versatility in the kitchen space. Kakkar, who cooks up innovative recipes himself from time to time, wanted everything in his kitchen to be easily accessible. "If you have to look around for ingredients, you can't try tricky innovations with your cooking," he says.

Chef Gulati wanted her kitchen to have a country feel, complete with high counters and lots of space to roll out the pastries. Tania Bahri, who is fond of cooking and trying out new recipes for her kids, wanted her kitchen to be practical with pots, pans and ingredients within easy reach. She spent about Rs 2.5 lakh on her kitchen, decorating it with handmade tiles to give it an exclusive touch. "I enter the bedroom only to sleep, a major part of my day is spent in the kitchen," she says.

Not just the lady of the house, the entire family spends a lot more time in the kitchen these days. "We have laughed and cried, thrown tantrums, read tarot cards, had long conversations, all in the kitchen," says Gulati. For people like Sanjiv Shanmugham, a real estate businessman in Bangalore, the kitchen is also a place for entertaining friends. "I would say my kitchen is a small, happy, fun place where friends can cook up a storm," he says of his practical, airy kitchen which has a view of the palm trees.

More than anything, the modern kitchen has become an identity card, showcasing the homeowner's tastes as never before. "It is the expression of the personality of the woman or man who uses it," says Ponappa. "People want us to design the kitchen to their specifications, to cater to their desires," says Dhanda. "A kitchen is not just wood and marble, it's a part of the house to be treated with a lot of tender love and care," says Gulati. She'd want her dream kitchen to be in the front or the centre of the house. "I must smell the freshly-baked cake. The kitchen should not be isolated from the house," says Gulati. Sabharwal's philosophy has been to create spaces which are alive, which people can feel for. "Even washing dishes should be an interesting activity," he says.

You couldn't agree more with that but Bhatia would tell you that kitchen mania is not exactly feeding greater design consciousness. The only ingenious touch he finds is in the creation of storage devices like roll-out drawers. "Otherwise all you get is 15 shades of powder-coated steel taps.We are just selling gloss and glamour. It's like having a perfectly good car like a Maruti 800 but still going in for a new car," says Bhatia. Kitchen kitsch it well might be, but that isn't stopping Indians from splurging on it.

With Rehmat Merchant in Bangalore and Vaishna Roy in Chennai 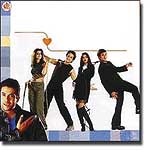