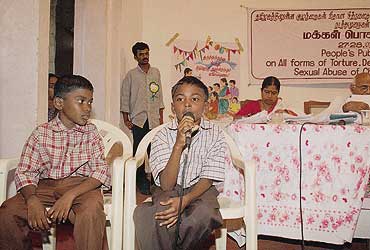 In what pot are you cooking rice now?

These were the words a little girl sang as 'Lines to a Mother' at the recent People's Public Hearing on All Forms of Torture, Degrading Treatment, and Sexual Abuse of Children in Tamil Nadu. At the end of the song, the child identified herself as Koteswari, goddess of crores. The irony couldn't have been richer.

Organised by a coalition of 19 NGOs, 'Operation Child Justice' had an eight-member jury witnessing 54 heart-rending testimonies at the public hearing in Chennai on March 27. "We have finally come to you," many said in desperation. "But this," declared an outraged Hosbet Suresh, the retired Bombay High Court judge who heads the panel, "is a nation where even the recommendations of the NHRC are ignored by the state."

Words failed most victims. Some broke down even before they began. The hearing drove home the fact that in most cases the state is the direct usurper of children's rights. In fact, some 300 million children in India do not have rights. They have laws. Some 48 laws, and more: the Children's Code Bill 2000; the Law Commission's 172nd report; and the Juvenile Justice Act 2000. But when it comes to implementation, the legal provisions are as rich as Koteswari is.

Depositions ranged from that of five-month-old infant Esther Rani to that of 22-year-old Rajaathi who was trafficked for sex work at the age of 14. Victims of police torture, sexual abuse, forced sex work, rape, domestic work; victims of caste atrocities and slum evictions, of corporal punishment at school, bonded labour, female infanticide—case after case demonstrated how when it comes to child rights and justice to abused children, Tamil Nadu—and India—has a pathetic record.

On a September night in 2000, 16-year-old Karthik was taken in under the National Security Act for the alleged crime of burning a bus and was lodged in the Madurai central jail despite his minor status. "They beat me up severely, and they beat me up more if I said I was innocent," said Karthik. He was a physical and emotional wreck after 215 days in prison. "I fear they will come back for me because I have stood up against them despite being a Dalit."

Murugesan testified as a victim of the atrocities of the Special Task Force involved in the Veerappan hunt for over 12 years now. Murugesan's father has been in STF custody since 1992. Unable to cope, his mother committed suicide two years ago. And his isn't a lone case. "Almost three-fourths of my village Nellore in Chamrajnagar suffers because of the STF. I hope to resume my studies in Madurai, become a lawyer and fight such cases."

In the case of Bindu, 15, the all-women police station in Theni district compounded the crime by ensuring that her rapist, Selva Kumar, married her. If she did not, the police threatened to book her under the Suppression of Immoral Traffic Act. The attitude was similar in the case of Rajaathi who was sold when she was 14 to a brothel in Gulbarga by a Bombay-based family who had employed her as domestic help; the police threatened to book her for prostitution. After eight years, the trial is still on and Rajaathi has been forced to recall her horror in court more than 15 times. In another case, 15-year-old Maheswari was asked by the court to pay Rs 20,000 for DNA tests to prove the guilt of rapist Marisamy. The burden of proof was on the child victim.

In a reflection of the caste and class factors at work, there was not one testimony from the urban middle class or from the upper castes. "Not that abuse, torture or degrading treatment does not happen in their homes. They are just hushed up," says Sudha Mahalingam, a panelist and national council member of the PUCL.So the burden of going public with their humiliations was invariably on the Dalit, adivasi and mbc children. Thus Sundarapandian and S. Arun, 10 and 9 respectively, recounted some strange lessons they had been learning at the state-run Kallar Reclamation School in Usilampatti, Madurai. "We are forced to use separate tumblers to drink water and cannot use footwear in the balwadis."

Vasanti Devi, chairperson of the State Commission for Women and jury member, is planning to meet chief minister J. Jayalalitha and present her with the 'interim verdict' of the panel. The organisers hope that the hearing would result in justice being done in at least 30 of the 54 cases. As for the children, at the end of the harrowing day they were seen going up and down in the building lift. Simply because they had never been in one. Some even asked the caretaker, "When will we come here again?" It's a question, which like many others, might remain unanswered.

(Some names have been changed to protect the children's identities.)