A series of random, disconnected scenes which have no purpose other than highlight the comic-macho persona of Bhai 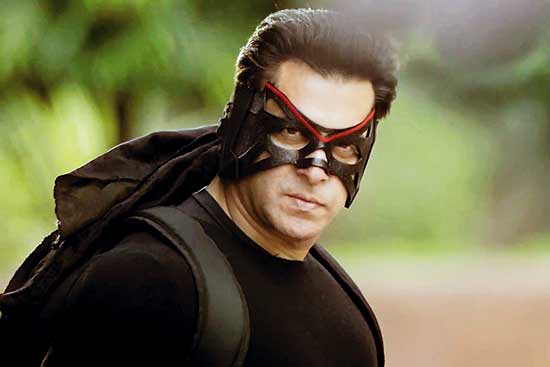 The stardom of Salman “Bhai” Khan is a singular, curious phenomenon. On the one hand, there are the teeming “masses” who connect strongly with his on-scr­een persona and look up to the star as their ultimate icon. On the other hand are the city-slickers who patronise him as an objet d’art because it is curren­tly cool to do so in social circles. Together, they have built an unyi­elding, hard-line cult of Salman that decrees that the star can do nothing wrong. Not even when he delivers something as dull and drab as Kick.

Would anyone have watched this film had Salman not been there, one wonders. The urge to make Rs 100 crore in the name of Bhai forces upon us another lazy and smug piece of filmmaking, if you can call it that. Don’t go looking for an original story, it is nothing more than an over-early and overeager homage to Dhoom 3, the Rs 300 crore blockbuster of Bhai’s friend Aamir Khan. What’s more, instead of coherent story-telling, debutant director Sajid Nadiadwala just strings together a series of random, disconnected scenes which have no purpose other than highlight the comic-macho persona of Bhai. All would have been well had the masala been right but Bhai here seems more blah than wah. More so, because he blatantly uses this film, as he used Jai Ho, to boringly sell his charity work, desperately trying to plug himself as a good boy even as the many court cases tell us a different story.

In a way, then, the Devi-Devil split that Salman plays here is quite apt. However, the typical Bhai brand of cheese is missing. It’s evident in the scene where he crosses the railway line just as the train is passing by, but that’s just a second long. The unique Bhai dialoguebaazi also doesn’t extend beyond the “dil mein aata hoon, samajh mein nahin aata” line.

The film is just loudness above all in which Jacqueline does her job with a misplaced earnestness. Nargis Fakhri, who can’t dance to save her life, is handed over the onerous task of wooing the audience with an item number. Consummate actors like Sanjay Mishra and Saurabh Shukla promise to bring in some good humour but are prevented from going beyond slapstick.

It’s a moment of reckoning for Bhai in other ways. A leaner, meaner and dishier Randeep Hooda trumps him in the eye candy quotient and the cheesiest of scenes get stolen by Nawazuddin from right under Bhai’s nose. Hamming to the hilt and over the top in playing to the gallery, Nawaz is the one the janata ends up batting for, even though he makes an appearance late in the second half. The best moments belong to him. Be it bursting the bubble wrap with which he has killed someone, while talking of a stress-­reliever or reciting Ghalib. Or the weird laugh and the “tock” sound he makes with his tongue. Yes, Kick should have been called ‘Tock’.