The film is likeable, mainly because it deli­vers what it promises: an unpretentious, bubblegum rom­ance 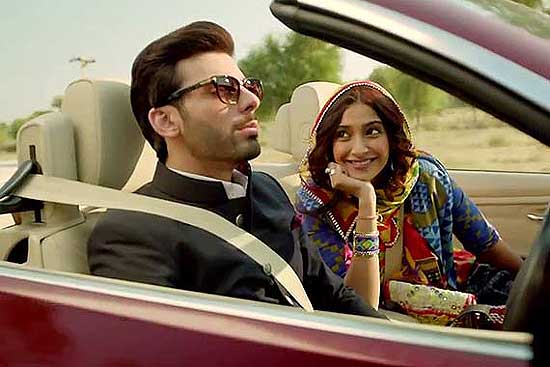 You approach Shasha­nka Ghosh’s Khoobsurat with much trepidation, especially because it’s a remake of a Hrishikesh Mukherjee favourite of the ’80s, Khubsoorat. It’s a relief then to find that the three-decade-long gap, the brand new cast and titular switch of ‘u’ and ‘o’s haven’t resulted in a cringe-worthy film. Shashanka Ghosh, who made the quirky Waisa Bhi Hota Hai Part 2 and Quick Gun Murugun, goes mainstr­eam and plays to the gallery with the usual filmi Punjabi-­Bengali-Rajasthan roya­lty stereotypes. But the film is likeable, mainly because it deli­vers what it promises: an unpretentious, bubblegum rom­ance with an airhead, overly styled, loud chatterbox heroine (a role well-suited for Sonam) and an easy-on-the-eye hero despite that silly puff of a hairstyle (current heartthrob Fawad).

Khoobsurat is consistent in its flaky fun. And all the entertainment does not have much to do with Sonam or Fawad. It’s because of the solid and likeable supporting cast, specially Ratna Pathak Shah, who fits in well in her mother Dina Pathak’s shoes and plays the role of the authoritarian royalty with sha­des of her own character in the TV serial Sarabhai vs Sarabhai. Amir Raza Hussain is dignified as the new age Ashok Kumar and Kiron Kher rescues her cliched role with her comic timing. The predictability is shored up well by some good lines and wordplay (look out for Kiara and kyari) that make you chuckle along in their unabashed silliness.