Memories of the '94 plague are blissfully gone. This is now India's second cleanest city. 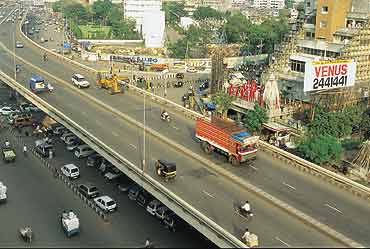 outlookindia.com
-0001-11-30T00:00:00+0553
Ten years ago when the plague struck Surat, India's diamond capital suddenly acquired the dubious label of being one of the most filthy and mismanaged cities in the country. A blotch on India's map. Open drains, mounds of garbage uncleared for months breeding epidemics, a criminally apathetic municipal administration—it was all over the media.

But the city has since undergone a total transformation. So much so the Indian National Trust for Art and Cultural Heritage (INTACH) has judged it the second cleanest city in the country next only to Chandigarh. Clean streets, wide roads, flyovers and a municipal corporation that actually works. By any yardstick, Surat is the most liveable place in Gujarat. Once it had the highest incidence of water-borne diseases in the state. Now, it has dipped far below.

Surat's revival is not just the story of a local administration shaken out of stupor after the plague. It's the tale of the transformation of the collective attitude of around 30 lakh of its citizens. The catalyst for this change was one inspired man, Suryadevra (Suryapur is incidentally the ancient name of Surat) Ramchandra Rao, a municipal commissioner with vision. The working model he put in place is still functioning more than six years after he was transferred from the city he set right.

Before Rao, the Surat Municipal Corporation (SMC) functioned on the whims and fancies of the commissioner of the day. "Now, the individual is out, the system has taken over," says former deputy commissioner of Surat Ashwin Mehta. The change that Rao brought about has endeared him to the citizens. No wonder, when he was transferred as chairman of the Vizag Port Trust, there was a public outcry against it. Even today people have fond memories of him and refer to him as Rao sahib. 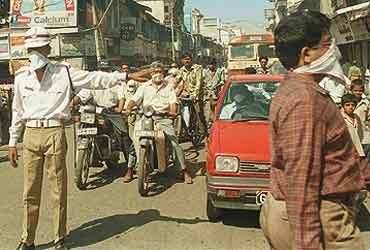 Ironically, it was a reluctant Rao who took charge as commissioner in May 1995. He had then considered Surat a punishment posting. Nine months had passed since the plague struck. The municipal administration was in a shambles. Rao identified the proliferation of illegal constructions as the main problem. Almost 85 per cent of the city lacked drainage and half had no piped drinking water.

The new commissioner first took the staff of the SMC on his side and assured them of his full backing should there be any political interference. Next he won over the citizens by proving that his work would improve the city and their lives. He also promised them that with their support he could make Surat a city that Gujarat would be proud of.

Many in Surat will tell you how they were embarrassed by the filthy city tag. With a roaring diamond and textile trade, there was no dearth of funds. Says a leading businessman: "We were rich people living in a huge pig sty. Only after the city became clean and the garbage was cleared did we realise the condition we were living in all these years."

Rao launched 'Operation Demolition', targeting the construction mafia and buildings without clearance. Initially it was met with resistance, but soon the people voluntarily demolished their own shops and houses. Businessmen went in for 'demolition sales' to clear stocks before they dismantled and rebuilt their shops. People broke down houses and called in architects to redesign. Recalls Mehta: "A stage came when our staff just went and drew lines with chalks over illegal parts of the buildings and the people themselves took care of the rest."

Once he'd won over the people, Rao continued his good work. To deal with garbage on the streets, the commissioner's next target was the sweetmeat shops and wayside eateries. These operated in the most unhygienic conditions but prospered because the average citizen couldn't care less. When newspapers published pictures of the kitchens of these eateries with cockroaches and rats moving all around they were shocked. Rao would be seen standing in the mess, ordering action. The corporation staff were embarrassed as the frail jeans-clad commissioner walked into the garbage and slush, sometimes knee-deep. He ordered officials to learn first hand the problem and decide on what must be done. 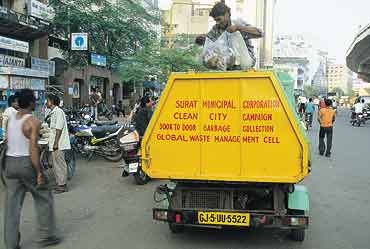 After a few months, the commissioner stood in a corner overseeing the staff do their job. Soon the backlog of garbage lying for months was cleared, the blocked sewerage systems were cleared. Says leading paediatrician Dr Ashok Kapse, who has done several studies on the health problems of Surat: "Most important was the sweeping of the streets at night. So when you go out on morning walks, you're greeted by a pleasant ambience and freshness. The people were delighted that this was possible in their town and compared the situation with the mess they lived with earlier. Now, nobody wants to fall back on the old ways."

The most palpable impact has been on public health. Says Kapse: "The incidence of water-borne diseases has drastically come down by as much as 70 per cent, which is a big achievement and an evidence of the close monitoring done by the SMC." Concurs Dr Manak Asawa, medical superintendent of the Mahavir General Hospital: "The rate of hospitalisation due to water-borne diseases has come down drastically from say 30 per cent then to 10 per cent now." "Surat," says Kapse, "once notorious for high incidence of water-borne epidemics, is now famous for just the opposite."

He explains why this change has happened. "When the plague struck, the SMC had no idea about the ground realities. Now there is a system in place. In fact, Surat is the only city in the country where the municipality is compiling data from its public hospitals, and even reaching the private hospitals and practitioners to collect information. It is heartening that based on this data, the SMC regularly organises clean-up and awareness campaigns in problem areas. While this was unimaginable in a place like Surat, such a practice is rare in any case."

The current municipal commissioner, G.R. Aloria, is living up to the challenge and says, "You will be happy to know that now 85 per cent of the city has a sewerage system, while 10 years ago 85 per cent didn't have it. Only half of the city then had piped drinking water. Now there is 90 per cent coverage." The SMC brochure calls Surat the 'City of the Future'. And for once, the publicity pitch is not out of place.