'As I watched Shahrukh, I relearnt the age-old maxim that acting is all about doing and not talking or thinking, and has more to do with gratifying the viewers senses than confusing him with some sort of superior logic.' 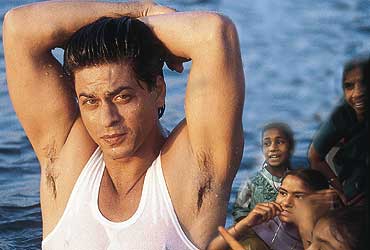 outlookindia.com
-0001-11-30T00:00:00+0553
I have always believed that life comes down to a few key moments and it is the fragrant memories of these moments which hold our relationships together. A fortnight ago while I was in the throes of my film shooting, Vivek, an old assistant of mine who is now working for Shahrukh Khan forwarded me an SMS message that he had received from SRK who was undergoing medical treatment in London. It said: "Tell Bhatt saab that I am coming to him with the first draft of my memoirs very soon. He will be the first person to read it. Also give him a hug and tell him thank you very much for pushing me to write my memoirs."

This heartfelt message made my otherwise drab and dreary day sparkle. It touched me deeply. Gratitude of any kind in Bollywood is so rare. Memories of the time spent with this wonder boy who has blazed through the skies of the entertainment world began to spill out of my head. It only reaffirmed what I had always felt about him. Life for Shahrukh is no brief, hesitant candle, but a splendid torch, which he will make sure burns as brightly and as unapologetically as possible before passing it on to the next generation of entertainers who are contending for the throne.

It’s difficult to translate the chaotic ebb and flow of experience into a narrative form with a beginning, a middle and an end. When so much of our consciousness is visual or non-verbal, how much of it can we convey through the limited medium of words? The task becomes doubly difficult when you have a subject who is an emotion-producing machine like Khan.

I first met Shahrukh in the mid-nineties. The film that brought us together was my half-brother Robin’s maiden venture Chahat. Those were the days when whatever I touched turned into a wasteland. My life had lost all sense of purpose and my need to express myself through cinema had sucked itself dry. I lost all passion for my work and was enveloped by a fierce loneliness. Hardly the kind of director Shahrukh would have needed to work with, at the stage that he was in. His ascent to the top had just begun. But never once did he treat me with the contempt that I deserved at that point. He had perhaps locked in his mind a picture of me from the past—and the Mahesh that he respected and admired was the only one he seemed to see in front of him, despite all evidence to the contrary. What a strange picture we must have painted—a young enthusiastic actor, bursting with unrealised dreams and energetic talent, and a has-been, burnt-out director, cynical in the extreme. The only thing that we had in common was our love for painkillers. I will never get over the earnestness with which he listened to my ramblings and tried to understand why (when) I said that I was through with directing movies. Shahrukh still insists that someday I will come back on to the set and shout out ‘start sound’ once again.

Albert Camus once said: "Real generosity toward the future consists in giving all to what is present". Well that’s exactly what Shahrukh did and still does. He exhausts the limits of the possible. He is the only actor I have known who has this inexhaustible energy to go on and on, giving one take after another, each one completely different from the first. In fact, when you call for one more take, his face lights up like a greedy child, at the possibilities before him. Like some sort of emotional archaeologist, looking to discover some more hidden treasure within himself.

He unashamedly says that he learns acting from children and his pet dog is his most reliable teacher! I remember one day how he gave me this one-man show of all his dogs’ various moods, and had me in splits. As I watched him, I relearnt the age-old maxim that acting is all about doing and not talking or thinking, and has more to do with gratifying the viewers senses than confusing him with some sort of superior logic. It is this ‘feel, don’t think’ policy that has hurled him far ahead of his thinking, pondering competitors, and helped him carve out an everlasting niche in the hearts of his audience.

Late one night during the physically demanding shooting of the climax of Chahat, Shahrukh made a startling admission. He said that he found the experience of shooting for some films so absorbing and intense that it made no difference to him whether the film was a hit or a flop. He wondered why people assume that success is the pinnacle and failure the pits. They are not. The real pinnacle according to him is when we are so engaged in what we’re doing that this distinction vanishes. Athletes call it being in the zone.

And that’s one other thing I love about Shahrukh. When he’s faced with extreme challenges, he enters a state of elevated concentration, one he calls flow, in which time seems to stand still and one moment blends into the next and doing the right thing becomes almost effortless. Duplicate, the only film in which SRK has played a double role, was a joy to work on. Irrespective of its box-office fate, it remains a film that has resulted from this very effortlessness and its unique vitality is a testimony to that. As we entertainers have discovered with time, memories of a hit or a flop may grow vague, but moments of intensity remain vividly etched in the brain cells for a long, long time. And the experience of Duplicate is one such memory I will cherish for the rest of my life.

Two more lessons which I have learned from the Khan are: First, that the antidote to exhaustion and fatigue lies in wholeheartedness and not in rest. The other that fame is not an antidote to loneliness. Unlike many stars that fall back upon wealth, awards and talk show appearances as measures of achievement, his laurels have brought him little sense of self-worth. Today, he stands at a crossroads. It will take a lot for a workaholic like him to do nothing in this phase of work-deprivation. Work for him has been the sole reservoir of his identity; he has been addicted to it. Unfortunately for him, this addiction has been applauded and hailed since it has generated a wealth for others. For a long time now the world has overused this money-making machine called Shahrukh Khan. Little did he realise that it was the work that had him, and not the other way around. I sincerely wish that in this phase of pause, Shahrukh realises that the most profound successes are those ones that are gratifying even if no one else knows about them, like putting his children to sleep. Because in this celebrity-consumed era, it’s easy to confuse fame with success.