They filled Cairo’s streets, change is in the air. What will a cornered Mubarak do? 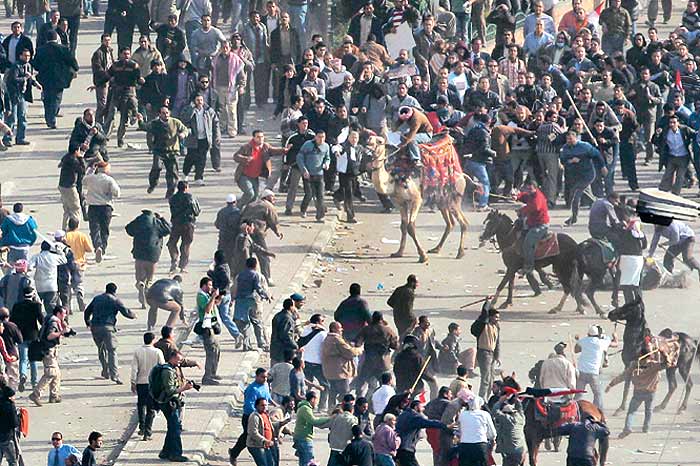 The area of ground separating them was just a few hundred yards but the political divide between the two sides who were raining down rocks and stones on each other may now be impossible to bridge. I was standing on the edge, at Tahrir or ‘Liberation’ Square. One of Cairo’s most famous landmarks is now a battleground. The pro- and anti-Mubarak demonstrators have been engaging in running street battles for days. Automatic gunfire punctuated the screams and shouts and the sound of the sidewalk being broken up for ammunition. I was on the frontline of that battle with the young men, demanding that President Hosni Mubarak goes. They had just breached the barricades of the pro-Mubarak camp, which many here believe are government security men dressed in civilian clothes. They poured through the cracks between the burnt-out cars and trucks lying on their sides on the road. I ran through with them. Men holding their bleeding heads or carrying their unconscious comrades staggered past in the other direction. Tanks now stand where hawkers used to sell postcards to passing tourists. This is Cairo today. The city that spawned one of the world’s greatest civilisations is now lurching towards barbarity.

So after 30 years of putting up with President Mubarak, what finally pushed people over the edge? How did the region’s most stable country get dragged to the edge of the abyss? The roots of this week’s uprising can be traced back to January 25, when small protests were held around the country on national police day to protest against police brutality. Without a trace of irony, the reaction of the police to the protests was...police brutality. Some protesters were killed, many more were beaten up. And so they in turn responded with calculated fury.