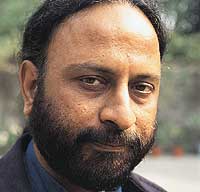 Time Bomb made a strong debut last week.
The response has been overwhelming. The show has a fresh concept and has gone down well.

The show's villain resembles Osama bin Laden.
Two contemporary threats, those of WMDs and terrorism, are real. Osama is not just a person but a symbol, the face of terror.

There has been concern that it could be inflammatory. Does that worry you?
No, not at all.

You are known to work with social and political themes. How come an action thriller?
After I finished The Rising, Zee asked me for a sequel to my show Pradhan Mantri. I decided to make it more dramatic and real. That became Time Bomb.

Do you think audiences are ready for content beyond family drama?
This show is a political and psychological thriller but also has personal crises woven into it. You have to fight a trend with something different.

Your films and serials come after a long gap.
I started Maya Entertainment, a visual effects firm. Then I worked on The Rising...