Sabarimala was the perfect trigger for savarna and masculine trauma, festering under its social skin, to erupt in Kerala 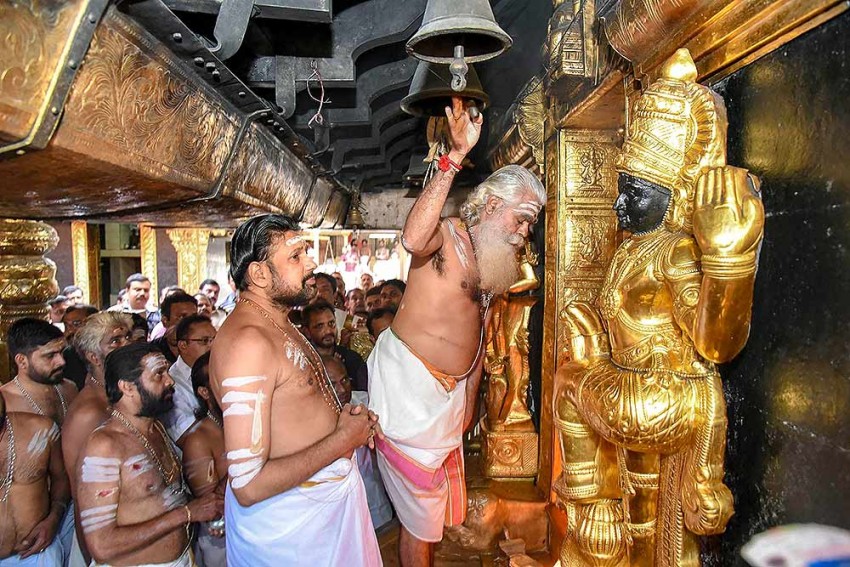 As a middle-class feminist born to a privileged caste in Kerala, it is a risky life these days. Social risks of many sizes and shapes crouch in the corners. Any moment one may run into cousins who have never shown any interests in temple visits, but now insist that you dump everything else and explain your assent for women’s entry into Sabarimala. On Facebook, you may catch your English teacher from high school indulging in a veritable orgy, writhing in the sheer pleasure of calling unknown progressives choicest sexual expletives. Yes, the same prude who shot off complaints to your parents because she caught you looking up ‘whore’ in a dictionary. Not to speak of venerable uncles, aunts, brothers and, sadly enough, sisters and nieces, asking incredulously how women could ever be equal to men, especially in matters of faith.

At the beginning of this cacophony, there seemed to be a semblance of reason, however slim. Those who opposed the Supreme Court verdict tried to say (even if in shrill tones) that they had reasons. Some offered a version of the classic rapists’ self-defence—about women’s bodies provoking baser instincts in men—by claiming the deity’s celibacy would be disturbed by the proximity of women. Others claimed that because women menstruate, they cannot partake in the prescribed 41-day spiritual austerities. Not one of these arguments is sound.

Gradually, the right wing abandoned the terrain of reason totally. Now, the most egregious gestures, outrageous verbal abuse and cavalier violation of public order look increasingly normal. Young women with progressive views report feeling threatened by their own kin. Violence against dissenters is in the air.

I can hardly help stressing how strange this feels. Most major gods in Hindu temples here are vested with a sankalpam, a ‘founding imagination’ that endows them with deeply human qualities—gentleness, avarice, a stormy temper. They are often kin to each other, and have a specific personality. There is even a goddess who menstruates regularly!

The Christian saints are also woven into divine-kin networks. For example, St George, a ubiquitous presence in Kerala, is often venerated as Kali’s younger brother, and linked to her temples through ritual practices. The goddess in the Karikkakam temple in Thiru­vananthapuram and Mother Mary of the Vettucaud Church nearby are supposed to be sisters—in earlier times, a visit to the goddess had to be necessarily complemented with a visit to Mary’s church. Everyone in Thiruvananthapuram went to the famous Uroos of the mosque of saint Beema Beevi to pray for progeny. Until recently, one still felt protected by a magic cloak made of multiple, interwoven strands of faith. It is as if an explosion of hatred, vengeance and outright evil has ripped it to pieces.

Again, just a few decades back, it seemed normal to alter seemingly time-honoured but anachronistic customs. In 1968, at the famous Sreevallabha temple in Tiruvalla where women’s entry was restricted (a custom cast in the iron of myth, bolstered by the very sankalpam about the Vishnu there), the temple authorities and the devaswom department together decided to abandon the restriction. Nothing bad happened to anyone, including the deity.

The ‘sankalpam’ around specific deities have been changed before. No, nothing bad happened...no heavenly thunder.

It appears that earlier, it was even easier. An amusing story passed down in the family is about a grand-uncle, a senior official in the Travancore devaswom, who ‘married off’ Siva and Parvathy at a temple in central Kerala. The festival there always staged a melodramatic ritual—the two deities arrived on their respective elephants all ready to get married, the nuptial goddess ushered in by women bearing auspicious wedding-lamps. However, the sankalpam here was that the two were fated to stay single. Because, at the last moment, the goddess would start menstruating. Every year, this news was revealed dramatically, the wedding cancelled, the lamps snuffed out. The two would always return to their respective shrines in tears.

Now this grand-uncle had witnessed this for a couple of years. He asked a senior man from the village how old the ritual was. He had seen it for some 60 years, the man replied. Alright, said our grand-­uncle, high time they were married—she would have surely reached menopause now. The next year he ordered the deities be allowed to marry! No, nothing bad happened to him. He lived well, no thunderbolt from heaven struck him, he died peacefully, and people attributed his fortune to the fact that he had wedded the divine couple.

In present-day Kerala, a creeping savarna trauma seems to have blanked out such memories. Though they are now acting out borderline terrorism, these angry people have not always been supporters of their present leaders. Not all were such rank misogynists. That is why we need to treat the ongoing carnival of irrationality and violence as a symptom of deeper socio-psychological wounds. There is reason to believe the insecurities plaguing Kerala’s moral majority have been growing over the past decade, especially in response to public defiance of conservative mores by young people, and the very public and powerful self-assertion of gender and sexual minorities—not to speak of the strengthening of feminist discourse.

Savarna trauma finally peaked with the terribly unsettling experience of the floods that devastated Kerala this August. It was the first time in recent history that the savarna elite felt their lives directly threatened by forces of nature. It was also the first time they were forced to ditch their caste pride and accept the help of the fisherfolk and total strangers. Sabarimala merely offers a trigger for this trauma to erupt. No wonder there is in the present an unprecedented wave of rabidly casteist insults, all directed at ‘lower-caste’ leaders.

Men of the less privileged castes have had their own traumas accumulating too. The venom and anger about the Sabarimala verdict comes as much from subaltern spaces. Why? Working-class men’s spaces of leisure and homosocial bonding have been shrinking steadily of late; the growing confidence of ‘their’ women, now ­increasingly involved in self-help groups and such like, has left them feeling more and more threatened.

The wounds are deep and festering. Even as one is thoroughly ­repelled by the sight of educated young women declaring they do not need gender equality, the need for a deeper psychopathology is evident. The diagnosis is going to be layered and complex, and it is certainly not going to be pretty.

(The writer is with the CDS, Thiruvananthapuram)