Apart from brutal bouncers, breathing down our players' neck will be securitymen 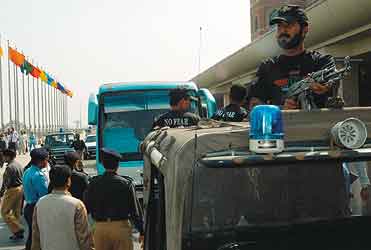 A five-tier security ring clusters Lahore's Allama Iqbal Airport, with a red alert in force. Bullet-proof vehicles transport the Indian team to its five-star abode with a convoy of elite uniformed escorts. Nearly 200 security personnel of all hues inside the hotel (thoroughly scanned by intelligence officials and sniffer dogs the night before), and quite a few outside it. Posses of mounted police keeping watch from vantage points.

So, is this watertight security going to set the tone for the whole of the six-week tour, with nobody allowed anywhere close to the Indian team?

For starters, take a look at the security arrangements at the warm-up game on Thursday. The Gaddafi Stadium was taken over 24 hours before the match, with bomb disposal squads scouring the place. As many as 2,500 policemen guarded the stadium from outside, with another 1,000 inside. And another 400 secret service men maintained a hawkish eye on the goings-on.

By the look of things, reaching the stadium during this tour will be an ordeal for the ordinary cricket fan, but there are millions...