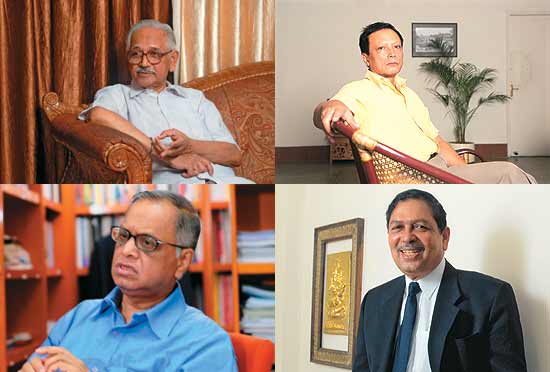 Once the unpredictable and acrimonious wrangling over the Lokpal bill is over and a so-far elusive draft of an “effective” Lokpal bill is sealed and enacted into law, India will enter the next stage of the anti-graft battle: the appointment of a Lokpal chairperson and its members. With the government’s ratings plummeting, it can ill-afford the public relations disaster of the kind it suffered when it appointed a tainted bureaucrat as the country’s premier anti-corruption watchdog, the chief vigilance commissioner (CVC).

In a first, the Supreme Court in March this year quashed the dubious appointment of former telecom secretary P.J. Thomas as the CVC after his arraignment in the infamous palmolein oil case of the 1990s was raked up again. The department of personnel and training had actually recommended initiating disciplinary proceedings against him. In the light of this disastrous episode, Outlook spoke to a few eminent citizens to ascertain who they think is best qualified to be the Lokpal.

The government and civil society drafts differ radically on the qualifications for Lokpal chairperson. While the former requires the nominee to be either a serving or former chief justice of India or a Supreme Court judge, the Jan Lokpal draft mandates the chairperson to have “extensive knowledge of law”. However, the latter places many conditions that limit candidature for the chairperson’s post. These include: anybody holding an office of trust or profit, anybody who has business interests and practises any profession. All members should also be of impeccable integrity with a record of public service especially in the field of fighting corruption. A person can also not be a member if he or she has a case involving “moral turpitude” framed against him by a court or has been a government servant in the last two years of being chosen. So here go the choices....

J.M. Lyngdoh comes to mind for his highly distinguished tenure as the Chief Election Commissioner and for his impeccable integrity. He is also a man who is highly conscious of the need to fight corruption. Even though he has retired, he has been active in the public sphere, especially as a petitioner in the Supreme Court in cases like the one that challenged the appointment of P.J. Thomas as the Chief Vigilance Commissioner. A second name is that of former SC judge B.P. Jeevan Reddy (who chairs the SC-appointed sit entrusted with the task of bringing back black money). He is a highly respected person among those in the legal profession. And, even before Anna’s campaign began, he had begun one against corruption in Andhra Pradesh.

Santosh Hegde is another person who could fit the bill, especially for what he has done to the office of the Lokayukta in Karnataka. A lot of people were miffed that the head of the government may not come under the Lokpal, but Hegde, conscious of the role and responsibility of the Lokayukta, didn’t hesitate from indicting B.S. Yediyurappa, the former Karnataka chief minister. A lesser-known name I would like to recommend is of K.R. Venugopal. He was a former secretary to the PM when P.V. Narasimha Rao occupied the post. He has unimpeachable integrity and is very humble, accessible and highly sensitive to the need of fighting corruption.

One can think of a few names like Justice Santosh Hegde, J.M. Lyngdoh, N.R. Narayanamurthy. But I would like to emphasise that in a country of 1.2 billion, there can be many other viable names too.

I think former cji J.S. Verma would be a good choice. He has rightfully earned for himself the reputation of being a clean judge. He has shown an affinity to get into the hurly-burly of politics. This was on display when, as chairman of the National Human Rights Commission (NHRC), he exposed Narendra Modi. (An NHRC team led by Verma had visited Gujarat after the riots and released a report in March 2002 indicting the state government on its failure to contain communal violence.) Another reason why he is an ideal candidate is because he is obstinate. If he knows he’s right, then it’s difficult to get him to let go of a position. This is something that would be useful as a Lokpal. In a way, he’s the Anna Hazare of the Supreme Court.

I think Justice A.P. Shah is a very good name. He is somebody who is a very distinguished person, a former chief justice of the Delhi High Court and has many laudable decisions to his credit. I also think people from the social sector like Aruna Roy and Shekhar Singh, who have been involved with the RTI campaign, are also good names but unfortunately they are not going to accept the offer. Anyway, who the chairperson will be really depends on what functions the Lokpal will finally have, whether the chairperson will be a person who’ll just listen to grievances of the people or actually be tasked with cleaning up systemic corruption.

Both the government and civil society drafts are on the extreme when it comes to qualifications for the Lokpal. While the government one has some general qualifications that are basic requirements, the Jan Lokpal demands that the candidate have a proven record of fighting corruption, something that those protesting now would be able to meet. While it would be improper to suggest any names at this stage, the person should have not just the commitment and acumen to fight corruption but also the knowledge of how the executive, judiciary and the legislature function.

But I am, in fact, not in favour of having one chief Lokpal as it will lead to unnecessary bitterness and competition amongst the members of the Lokpal committee. He or she should be first among equals, like the Chief Justice of the Supreme Court or a high court, with no special powers.