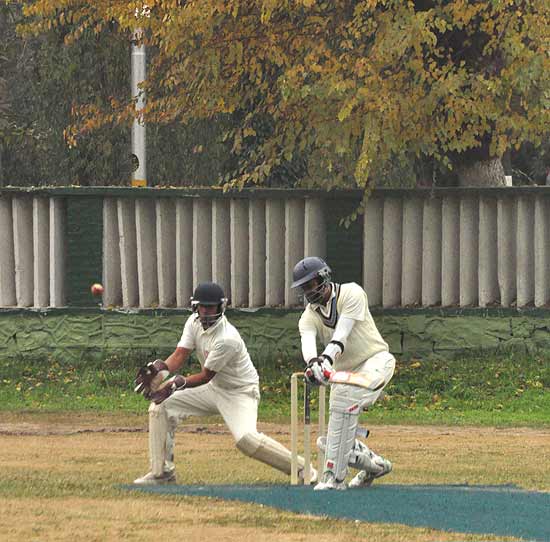 September 12: A middle-aged Rotarian cricketer in Calcutta picks the September 12 Outlook issue and spills his tea when he reads that Lt General Syed Ata Hasnain is using cricket to transform a troubled Kashmir. He daydreams and thinks aloud, “If Kashmir is really safe for cricket, then how about taking a team from Calcutta and playing across in the Valley?” He writes a brief request to the Lt General on playing cricket across India’s Iron Curtain and is surprised with the reply, “Most welcome. You will be guests of the army. We will take you to play cricket all across Kashmir.” Man Friday was dispatched to the nukkad ki dukaan for smelling salts immediately.

November 4: Some 15 club-level cricketers fly from Calcutta to Srinagar. Probably the first instance of a civilian cricket tour of the most militarily sensitive region in the world. Only three of us have been to Kashmir in the last 25 years; and only three have not been to London in the last three years. Some perspective. We are in blazers, looking quite cricket-corpo. People turn around to give us those looks; we feel kind of eyebrows-arching important. “Oh, holiday, right?” “No, no, actually to play some cricket.” “What, cricket? Kashmir? You guys part of some BCCI scheme? Who is funding your tickets? What, you’re not going for any tournament-shournament? You mean you have taken off from work to go and play kids half your age? Do you do this often?” And, “Just a minute, why Kashmir of all places?” We are enjoying this third-degree. 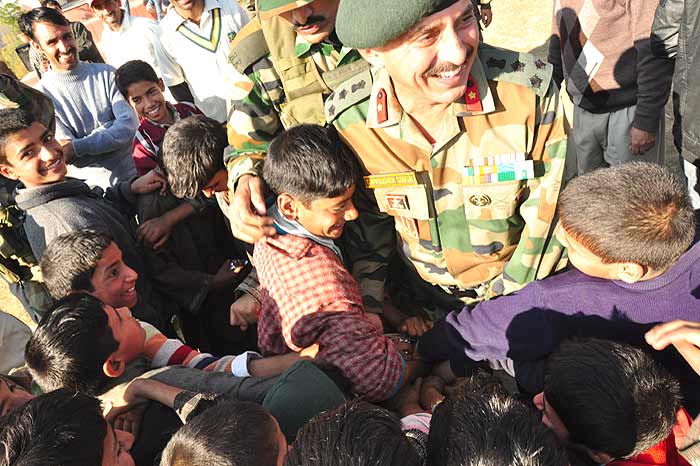 November 5: For decades, ‘Anantnag’ was a metaphor for ‘police firing’. At 8:30 am we are being herded into a military bus with armed escort (front and back) to confront the Anantnag Arsenals. The bus winds through roads skirted by the bat factories of Avantipura and the saffron fields of Pampore until we get to an open clearing where 20-year-olds are hitting vertical skiers into the clouds before they disappear into cold, waiting hands 50 m away. We overweights watch with awe. And this is just practice, hell. Then the teams line up to face each other. We mumble something about “we heard you reached the semi-final of the Kashmir Premier League, so we hope that at least we can give you a good game”. Their captain says, “I have spoken to my boys and if you feel that the spirit of the game is being compromised at any stage, aap apna haath uthaaye aur umpire ko ishaara karein. We are here to learn discipline from you players.” We motley collection of out-of-touch performers look blankly at each other. Once the mini-speeches are over, players state their name, walk to each member of the other side, look each other in the eye, shake hands...and then get on with the business of bowling the other team out. Anantnag Arsenals hits 192 in 20 overs; we reply with 130. We feel like kicking ourselves; the boys console us, “Masha-allah, kya badhiya khele!” When we are leaving, their captain says, “Thoda sa agar waqt aapke paas hota toh hum aapko ghar le jaatey. Kuch seb khilaatey.”

November 6: Rather than come, play cricket and scoot, the Rotarians decide to leave an enduring impact that will benefit the average countryman. We present an ambulance. This vehicle will diagnose potential cataracts across the Kashmir countryside and draw them into Srinagar where they will be operated by a joint team of army and other doctors. We present the vehicle to Lt Gen Ata Hasnain himself. We have not yet spent a full day in Kashmir but feel cocky enough to make prognosis to a man who has probably spent half his life studying this terrain. We propose that perhaps the time has come to take the cricket offensive two steps ahead. “One, get Kashmiri cricketers to tour the mainland starting with a return tour of Calcutta by your team next February; two, get the Pathan brothers (Irfan and Yusuf) to tour Kashmir, touching thousands of intending cricketers. These two young men, sons of a cleric, modest of background, successful and models of young India, will do more in killing the separatist movement than 100 howitzers.” The thinking Lt General nods. In my mind’s eye, he is probably issuing orders—get me Irfan or Yusuf on the line, let me speak to them. Thereafter, we drive off to meet the Budgam Blasters. We lose yet again on capricious matting. 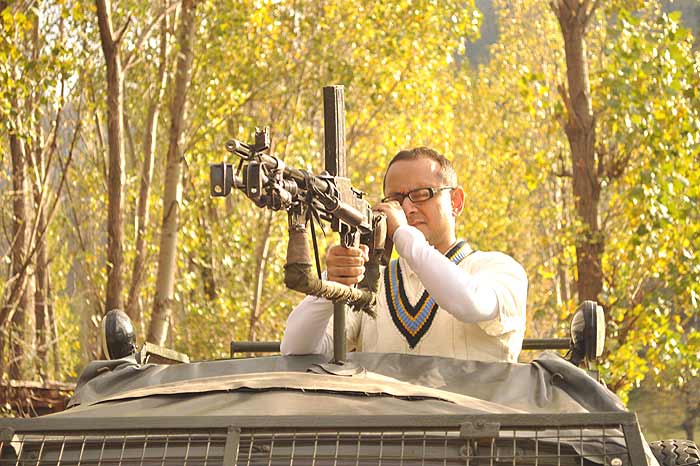 A young Rotarian fast bowler has the batter in the crosshairs

November 7: Id-ul-Zuha. Rest day. The army suggests that we do something productive. It packs us off to the Line of Control, Uri, to watch unusual army action. Two of the bitterest enemies in the world unlock their border gates, march out with erect stiffness and carry important consignments to be delivered to the other side—a basket of sweets. Until just a couple of days prior to this, the Pakistanis were firing improvised explosive devices into the Indian side; now they were saying their deceptive Id mubaraks, hugging each other on the bridge over the Jhelum-upon-the-LoC and confronting each other with “Tumney parson firing kyon ki thi?” and “Maine toh nahi ki thi. Woh shaayad terrorists thhe.” Cat and mouse elusiveness. After they have delivered their sweet basket, the Pakistanis disappear from binocular sight. The Indian explanation: “They don’t want to be seen on Id. What if we fire on any one of them? That will spoil the festival for all.” I ask an unrelated question: what then happens when India plays Pakistan at cricket? “Mat poochhiye saab,” is the Indian reply. “We are in a state of high alert. There is no saying what a Pakistani will do if his country loses.”

November 8: Day out in the snow at Gulmarg. Cold. Cloudy. Raining. The horseman who takes us on a three-hour mountain chuck does a 2011 tourism review: “Best year. Bahut tourists aaye. Maharashtra, Gujarat and Bangaal se. Achhi kamaai hui. Aaatey rahiye!” Then he slips in a bombshell: “I walk 7 km with my horse up or down the mountains each way from home to work every day. If I take the relatively flat road, it would be 20 km and probably 30 minutes longer.” Nobody bargains with him when it is over. One of us tips his helper Rs 500. We return clicking silhouetted chinars against a flaming sunset with our Nikons and saying intermittent “aahs”. 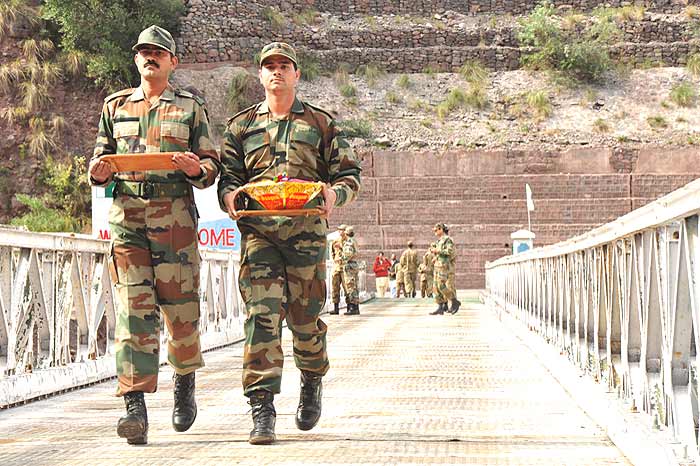 Baskets of Id sweets come from the Pak side

November 9: Last match, against Srinagar Sherdils, winners of the 193-team Kashmir Premier League. These guys have filled in leave forms at their colleges and offices on the grounds that a mehmaan team has come from the plains. Time wasted for most of them. Because it is not a match, but a mismatch. The SS captain senses the aberration. Rather than grind us into the dust and spend a lazy afternoon at home, he reverses the batting order; when it comes to bowl us out, he puts on the spinners instead. When one of us misses two balls in succession, smiles replace the usual urban sledge. When one of us gets a 50, three members of the SS team run up to congratulate. When the match ends, one of us takes off his cricket shirt, presents it to the team elder on the other side and invites our entire team to sign on his person. They do the same on ours with a collection of signatures in English and Urdu. Collector’s item.

November 10: Last day. A part of our caravan winds its way to the famed shawl shops of Srinagar and ends up buying stuff worth a terrorist’s ransom. The deal has to be called off because our friends are obviously not carrying enough. No problem, waves the smiling storekeeper. Please take the pashminas to Calcutta. Go home and send the money. We think this is a freak incident. But it isn’t. One of our teammates wants to buy zaafran (saffron) from Noor Mohammed and isn’t carrying enough paper. So a deal is struck: the little boxes of saffron will be couriered to Calcutta and our friend can remit the cash only after he has ascertained that the delivered quantity and quality both match his requirement. What if we decamp, interjects one of us urban questioning types. We trust, the storekeeper says. We fly fazed into Calcutta after midnight.

November 11: Emotionally hangovered. Sleeping under a fan. No desire to move a limb. Desire to seek leave. Hallucinating of chill, chinars and cheeriness. Occasionally diagnosed as ‘Kashmiritis’ with an overriding feeling that the most beautiful part of India probably lies north of Himachal Pradesh...and not just in its mountains.

Pizzas For The Soul