India’s success has sweetened the foreign reportage on Kashmir 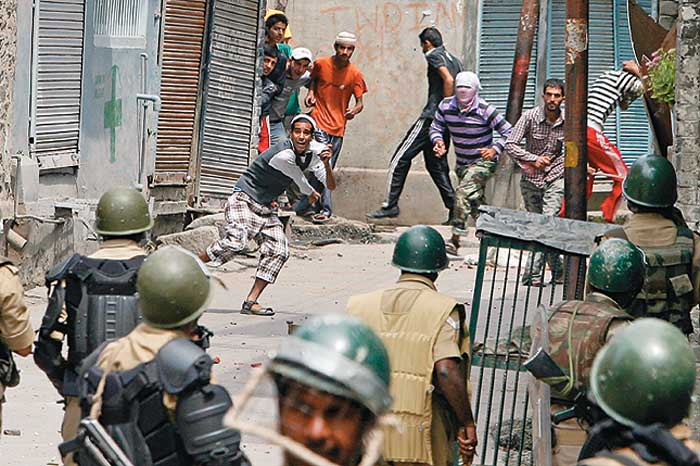 The images are stark, heart-rending, even captivating—hundreds of youths pouring out on the streets, defying curfew and pelting stones at security forces. Then, without warning, a burst of bullets rips the air apart. Several are hit, one or two would die, fanning a passionate rage and spurring people to more demonstrations of defiance. It’s a cyclical war between the stone and the bullet, the sheer asymmetry of the showdown lasting for all of three months until agitating mobs set government buildings and vehicles on fire last week. These are images the media worldwide loves to transmit; these are also stories journalists relish reporting on—in all its drama and history and gore; it also involves a piece of land two nuclear-armed neighbours lay claim to. No wonder, the violence in Kashmir’s cities, in contrast to, say, the Northeast, resonates beyond India, ringing alarm bells in powerful countries who take upon themselves the right to manage conflicts.

For these countries, their window to Kashmir are the foreign correspondents based in Delhi. It’s their reports and analyses that play a significant role in shaping global opinion; it’s they who influence perceptions about what India is, what it wants to become. A decade ago, Kashmir was the Big Story—it was where a separatist movement had become coloured by the virulence of Islamic jehad, with its confection of incendiary tirade and sudden bloodshed; it was because of Kashmir that India and Pakistan arrayed their troops eyeball to eyeball in the summer of 2002, raising the grim spectacle of nuclear confrontation. Kashmir was a media staple then, a good 10 years ago.

In these 10 years, Kashmir has discovered novel forms of protest, reinvented the people’s movement. Yet, paradoxically, foreign correspondents have simultaneously opened up for the world a new window to India—a resurgent, IT-skilled country showcasing its economic prowess, a destination for investors to park their surpluses. It even seems the world in recent years had turned away from the window that overlooked the troubled Valley. Says Vanessa Dougnac, who writes for Le Point-La Croix of France, Le Soir of Belgium and Le Temps of Switzerland, “The story about India is not all in black and white, there are many shades of grey to it. I am trying to tell the contradictions of India through my stories on Kashmir, the Maoists, the troubled Northeast.” This contradiction is reflected in Vanessa’s schedule—she spent the past few days with the Maoists; her next few days will be with the Ambanis, India’s richest business family.

But India’s inherent contradictions don’t conceal from Vanessa the travails of Kashmir, which she first visited in 2002. The violence stunned her, and she was struck by how different the state’s story was “from the one she heard in Delhi”. On one of her visits, she stayed with a family in Srinagar, and experienced the difficulties people encounter in their daily lives. The plight of the civilian population prompts Vanessa to deliver her verdict: “This is an endless war from which an entire population has been suffering.”

The state’s repressive methods in Kashmir is now seen in the West as essentially a law and order problem.

But Chinese journalist Wang Yaodong, who writes for Shanghai’s Wen Hui, reports on Kashmir from a regional perspective. “For us, Kashmir is a dispute between India and Pakistan,” Wang says. “The emotions there are a stark reminder that the Kashmir issue is not resolved. It’s also clear that people are not happy with the status quo there.” But Wang in his reports doesn’t harp on the “root cause” of the violence, perhaps aware of the similarity of the situation with Tibet and Xinjiang in China. He also says “China is aware of India’s sensitivities on Kashmir” and that he wouldn’t therefore want his reports to contribute fresh strains to Indo-China ties.

The situation is more complicated for those journalists hailing from countries with no real or immediate stake in Kashmir. From what perspective do they perceive the Kashmir situation? Responds The Los Angeles Times’ Mark Magnier, “As an outsider with ‘no dog in this fight,’ as Americans sometimes say, Kashmir seems to be one of those global ‘hairball’ issues, like Israel/Palestine or Northern Ireland of yore, where feelings run so deep and constituencies have become so entrenched that it will probably take a sea change before an equitable solution can be found, perhaps involving generations. I hope I’m wrong.”

Readers’ ennui is partly the problem for journalists reporting on protracted conflicts. In what ways do you persuade news editors to feature stories that have the familiar echo of the past? Why should an American want to read about the Abdullahs and the Geelanis? Magnier, who has also reported from Gaza, has hit upon a solution: “An approach I have attempted in conflict areas is to look at the issue from an almost mundane perspective—how common people cope.” So last July, he did a story on the difficulties of living under a curfew for two decades, of educating children, about the need to stock food, and about those at the margin who can’t afford to stock up.

For journalists from western countries, the ubiquitous ‘common man’ is indeed their focus. This is partly also because “Kashmir is too complex to explain to my audience back home,” says Sabina Matthay, who works for ard, the German national radio. This problem is further compounded, she says, because “there’s that ambivalence about the whole Kashmir story in terms of what the outside world knows about India or what they have begun to identify it with—as a democratic country, an emerging powerhouse.” So Matthay chooses to cut through the rhetoric to focus on the difficulties people encounter “to get on with their daily life”.

Sonya Fatah of USA’s Global Post agrees with Matthay, “It’s one of those stories where there is a lull and then again it picks up. But fundamentally, there are no changes.” Partly, any struggle aiming at success must convey its uniqueness to the world. But for Kashmir, says Fatah, it is hard to “escape the general narrative” of India making great progress. Consequently, the repressive methods and violation of human rights is no longer seen as an attempt to suppress a movement of independence, but essentially as a law and order problem.

As long as Kashmir burns, India will remain strapped from playing the global role it has conceived for itself.

The stone-pelters of Kashmir alarmed the Indian middle class, which feared their emergence would capture the world’s imagination in the same manner as the Palestinians had a decade ago. But hear what Matt Wade, who writes for The Age and The Sydney Morning Herald, says, “I can see how for the Indian media this fresh generation of young stone-pelters represents a shift, or new development in the Kashmir story but it’s difficult for me to convince my papers about it.” Not only has Kashmir joined the list of “intractable issues” weighed down by a reader fatigue syndrome, the trouble there has been overshadowed by conflicts in Afghanistan and Pakistan in which the West, particularly the US, has massive stakes.

But journalists from Arab countries don’t face the problem of selling the Kashmir story to their bosses and their readers. There are enough takers for it in the Arab world, a section tends to see the Kashmir movement as part of the worldwide Islamic movement. Yet Arab journalists refrain from linking Kashmir to the India-Pak dispute. Nor do they perceive it as an instance of suppression of Muslims. Waiel Awwad of the Alarabiya news channel visited Kashmir for the first time 10 years ago, and returned with the “realisation that most people do not want to break away from India”.

What then explains the anger in the Valley? Says Awwad, “Lack of development, poor governance, and rampant corruption have been fuelling people’s grievances. There is a serious lack of trust and confidence among the people about the government.” Agrees Sayed Ahmad Elnashar of the Middle East News Agency, “Kashmir is sitting on a volcano of anger and alienation as a result of political failures and misgovernance and its inability to provide jobs to a large number of youths.”

These Arab journalists don’t question India’s secular tradition or democratic polity, but they feel images of repression will hurt India’s image. Says Noureddine Bouchikhi of the Maghreb Arab Press Agency, “India is a large democratic country but when there is a loss of a large number of lives, it gives it a bad image.” Dialogue and economic package can’t be the panacea for Kashmir. What then? “Steps will have to be taken so that Kashmiris feel they are free and not under a colonial power,” says Bouchikhi.

India can’t be complacent about Kashmir just because it isn’t generating as big a headline in the global media as was the case in the past. Nor should it take solace from the world’s relative indifference to Kashmir in comparison to its obsession with Afghanistan. Prolonged movements have their ebbs and flows,  transforming overnight disinterested media consumers into votaries of causes. But more than anything else, “as long as Kashmir remains unresolved,” says Matt Wade, “it will force India to look inwards at a time it plays an increasingly important role in the world economy.” And as long as Kashmir burns, India will continue to get singed, strapped from playing the role it has conceived for itself in the global arena. There’s also the issue of conscience—can you revel in India’s glory even as Kashmir lives under curfew?

Corrected on September 22, 2010. Sonia Fatah works for the Global Post of USA and not Canada as was mentioned in print and, earlier, above by mistake.

“AFSPA Is Not The Main Issue”