Hurriyat's Mirwaiz Umer Farooq, who is under house arrest, says that New Delhi knows whom to talk to resolve the Kashmir issue, but is deliberately avoiding it... 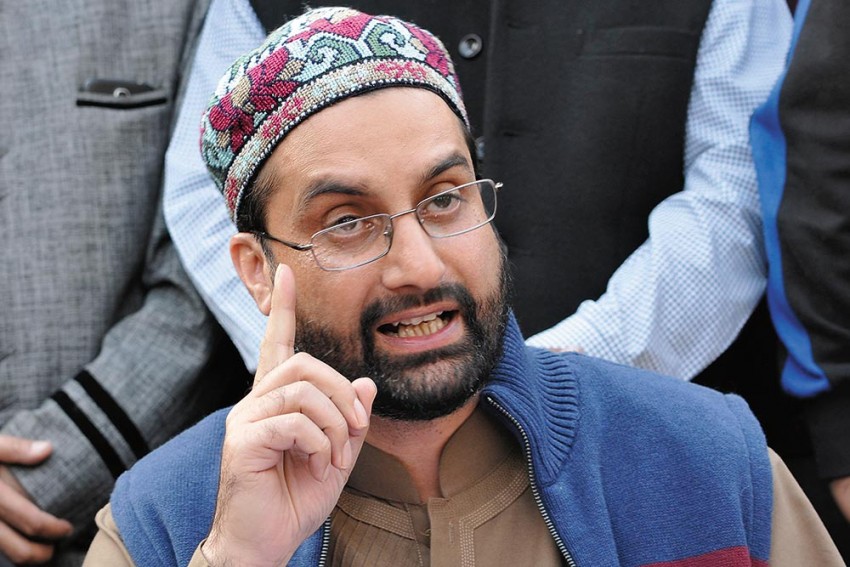 Photograph by Getty Images
Naseer Ganai May 05, 2017 00:00 IST ‘Kashmir Could Lead To A Nuclear Accident If There Are No Talks’ 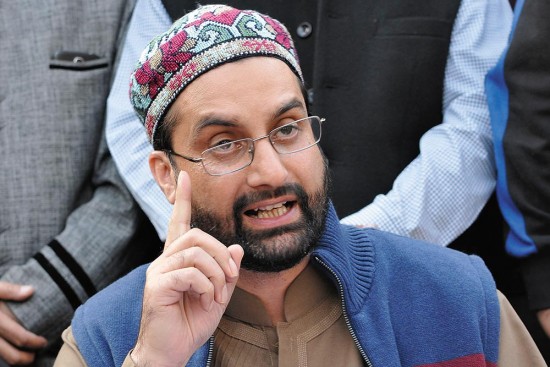 In Kashmir, the students are protesting in the streets ­demanding azadi, while the Election Commission of India has cancelled the Lok Sabha ­bypolls in Anantnag. Mirwaiz Umer Farooq of the All Parties’ Hurriyat Conference, who is under “house arrest”, tells Naseer Ganai in a telephonic interview that New Delhi knows whom to talk to in Jammu and Kashmir, but wants to avoid dialogue. “It is not a question of whom to talk to, but what to talk about,” says Mirwaiz.

Looking at the large-scale protests in Kashmir, especially by students, some people have been saying that those out in the streets have been radicalised beyond the control of separatist leaders and political parties. They see anarchy on the ground. What do you think?

No doubt the situation is serious. The people are fed up with the status quo, with its many uncertainties. They want it to end. They have been living for decades in the midst of political conflict in the world’s most-densely militarised zone. There is extreme repression at all levels and the people, especially the youngsters, will obviously react to it—even violently and radically sometimes.

The BJP government at the Centre seems to think there is no need to talk with the separatists as the young people of Kashmir are not listening to them any­way and so, even if talks were held, nothing will change in the Valley…

I don’t know what they mean. It’s just a way of addressing a constituency in India that is questioning the government’s policies and wants them to act, which they don’t want to. It’s not as if the youngsters are out there for the fun of it. There is an obvious context to what is happening here. Kashmir is a political problem about the political sentiments and aspirations of the masses, including the youth. The moment New Delhi acknowledges it and decides to address it, the situation on the ground will automatically change.

Whom should the Centre talk to? Should it not talk to pro-India politicians such as Mehbooba Mufti or Omar Abdullah, whose parties—the National Conference (NC) and the People’s Democratic Party (PDP)—have talked of self-rule and autonomy?

The first question is for New Delhi. I think it is not a question of whom to talk to, but what to talk about. If it is about seeking a permanent and just resolution of the Kashmir dispute in accordance with the human values of respecting the right of a people by giving them the choice to decide their destiny, then New Delhi knows whom to talk to. It knows it also has to talk to Pakistan, which is a party to the dispute because parts of J&K are being administered by it. Ours is not just a political struggle, it is a human tragedy as well, with families and friends divided by the Line of Control and held hostage to the hostility between the two neighbours. As far as the pro-India NC and PDP are concerned, the government of India has already rejected their proposals.

In case New Delhi invites Hurriyat for a dialogue, will it accept the offer with or without conditions? And how would the Hurriyat want the dialogue process to begin?

It is a speculative question and we are face to face with harsh realities on the ground, where people are getting killed or injured every day. And yet, I can say that we still expect New Delhi to show itself as a real democracy that does not believe in holding a people against their will by its might.

“There is extreme repression and the people, especially the youngsters, will obviously react to it—even ­violently and radically sometimes.”

Does the Hurriyat have any roadmap for the dialogue?

Which dialogue? Let India acknowledge the problem, the rest will follow.

The Hurriyat Conference held three rounds of dialogue with the government of India earlier. How have things changed since then?

We did. We sincerely reciprocated to Atal Behari Vajpayee’s outreach to us and to Pakistan, despite the risks involved, with the hope that there was a genuine desire on all sides to resolve the issue, keeping our aspirations and will in view. What happened then? We were left in the cold and people’s faith was shattered. Kashmir’s political struggle has assumed a wide mass base since 2008, with young Kashmiris at the forefront. The situation is highly confrontational and deteriorating by the day as the Indian government has taken a harsh stand against the people of Kashmir, while the people have hardened their resolve not to yield to coercion.

The Indian government objects to CPEC (China-Pakistan Economic Corridor) as it goes through Gilgit-Baltistan. Do you think China will be a player in Kashmir in the future?

The geopolitical dynamics of the region is ever-changing. CPEC has surely added a new dimension and we cannot rule out mediation or pressure by an influential neighbour.

Last year, protesters raised the flag of China in north Kashmir. ISIS flags have also been spotted occasionally. How do you see such signs?

I believe youngsters are sometimes raising Chinese or ISIS flags just to irritate India. It means little beyond that.

How do you see the student protests  that started soon after the lowest-ever voter turnout in the recent Lok Sabha bypolls held in Srinagar?

Well, it indicates a mass rebellion by an entire people at all levels. They are exp­ressing their outrage against the status quo in which they are trapped for the past 75 years, more so in the past 30 years. They have been suffering as a consequence of this status quo and are protesting against it in whatever manner of expression is allowed to them—the students by protesting in the streets, and the masses in general by rejecting Indian political institutions.

How do you see the role of mainstream politicians after the minuscule participation of the people in the Srinagar bypoll?

It is for them to decide on their role. They have always worked towards consolidating India’s control over Jammu & Kashmir and served its interests in utter disregard of the people’s aspirations and sentiments—only to be favoured with the chair by New Delhi, which has been running the show here since 1947 through them. They have always been seen as representing India in Kashmir rather than the other way round

The army chief has warned protesters against going near encounter sites during anti-militancy operations. The state government too has asked protesters to stay away. But the people still rush to these places. Eighteen civilians have been killed this year. How do you see such confrontations?

This is the grim reality of Kashmir. The people see the militants trapped at encounter sites as liberators who would free them from oppression and are ready to sacrifice their lives to save them. The consequences are fatal—the government forces kill protesters with impunity, while the Indian government and a section of the Indian media, reflecting their utter insensitivity and hostility towards the people of Kashmir, justify these killings, saying “anti-nationals” deserve it. We are deeply concerned and aggrieved by these killings.

If New Delhi refuses to hold talks with Hurriyat and Pakistan, what will be the possible fallout?

It’s the fourth generation of youth in the streets today. The people of Kashmir will continue their political struggle and the conflict will keep the entire region on the boil, which could lead to a ‘nuclear accident’.