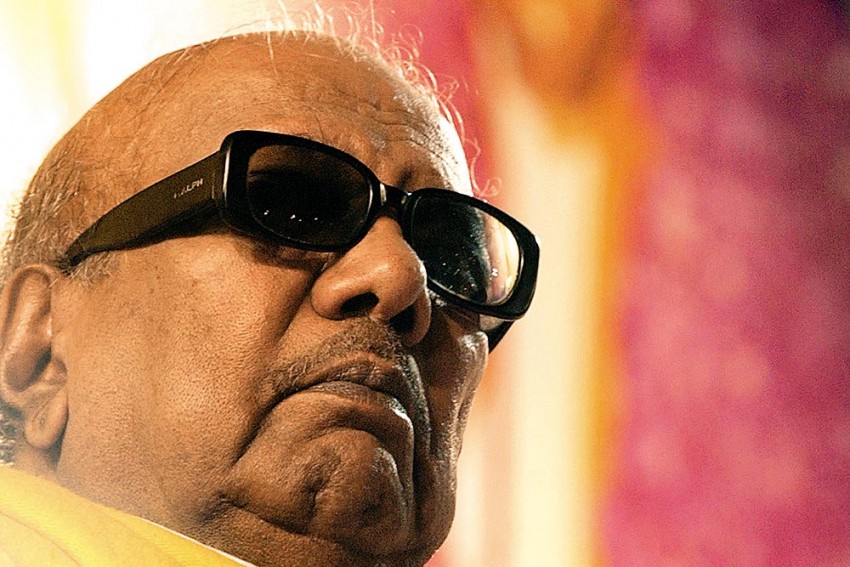 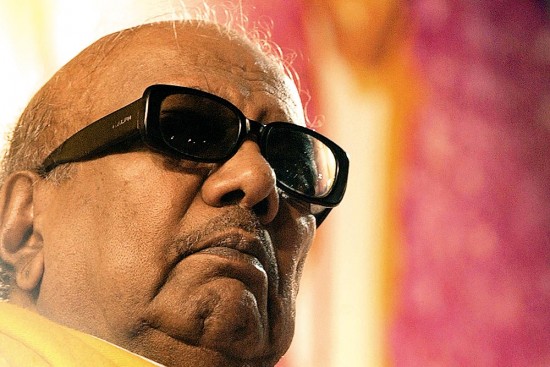 Even as Muthuvel Karunanidhi borrowed one day after another from his hospital bed, his admirers and “udan pirappugal” (brothers and sisters) hoped for a miracle that he would recover and pilot them again, seated on his powered wheelchair. But that was not to be. Karunanidhi’s departure has deprived Tamil Nadu of its most durable and doughty politician who had duelled against half-a-dozen chief ministers—the rivalry against friend-turned-foe MGR and his disciple Jayalalitha being the most memorable.

Karunanidhi was the first politician of the state to start the cult of idol worship of leaders, assiduously and at times shamelessly, promoting his own image to counter the filmi charisma of MGR and later Jayalalitha. He buttressed this with some brilliant oratory, pungent writings on the pages of his party organ Murasoli and tongue-in-cheek interactions with the media. His deep understanding of the Tamil classics, extrao­rdi­nary memory and recall and the ability to weave a counter-narrative ensured that Karunanidhi could never be ignored by the press and his fellow-politicians.

The DMK’s long tenure at the Centre diluted its pitch on federalism and as champion of Tamil rights. As a campaigner for social justice, Karunanidhi outscored both MGR and Jayalalitha.

“While most of Tamil Nadu was reeling under MGR’s charismatic hold after he floated his AIADMK and captured power in 1977, Karunanidhi kept his DMK together and relevant by critiques of the MGR government and expose of its wrongdoings. True, MGR won two more elections riding on sympathy waves, but Karunanidhi was always snapping at his heels. One could never discount him,” says R.K. Radhakrishnan, DMK spokesperson.

That he could keep the DMK intact in spite of two withering splits—first by MGR and later by Vaiko—underlined the fierce loyalty he commanded and his ability to enthuse his cadre. After the party was vanquished in the 1991 elections following Rajiv Gandhi’s assassination, many had written the DMK’s obituary. But Karunanidhi advised patience, predicting that an immature Jayalalitha was bound to make mistakes. She did and stumbled badly, ensuring his comeback in 1996.

Political compromises for the sake of survival came easily to Karunanidhi. Even though Indira Gandhi had dismissed his government in 1976, he made peace with her for the 1980 Lok Sabha elections. He won those elections but lost to MGR in the subsequent assembly elections. Similarly, in 1999, when Jayalalithaa had unsuccessfully arm-twisted A.B. Vajpayee to dismiss the DMK government, Karunanidhi, to save his government, sided with the BJP in the no-confi­dence vote and the subsequent Lok Sabha elections and remained part of the NDA government for over four years. He buried the Jain Commission indictment of the DMK in Rajiv Gandhi’s assassination and shook hands with Sonia Gandhi for the 2004 Lok Sabha elections and shared power with the Congress for ten long years.

Karunanidhi was vocal about state autonomy but readily gave in to Central pressure if it suited him. For example, he withdrew the state’s case before the Supreme Court on Cauvery waters when nudged by Indira Gandhi. The DMK’s continuous participation at the Centre further diluted the party’s pitch on federalism and state autonomy and even compromised its position as a defender of Tamil rights. Karunanidhi could only helplessly look on as the Sri Lankan President Rajapakse steamrolled the LTTE with the support of Delhi. 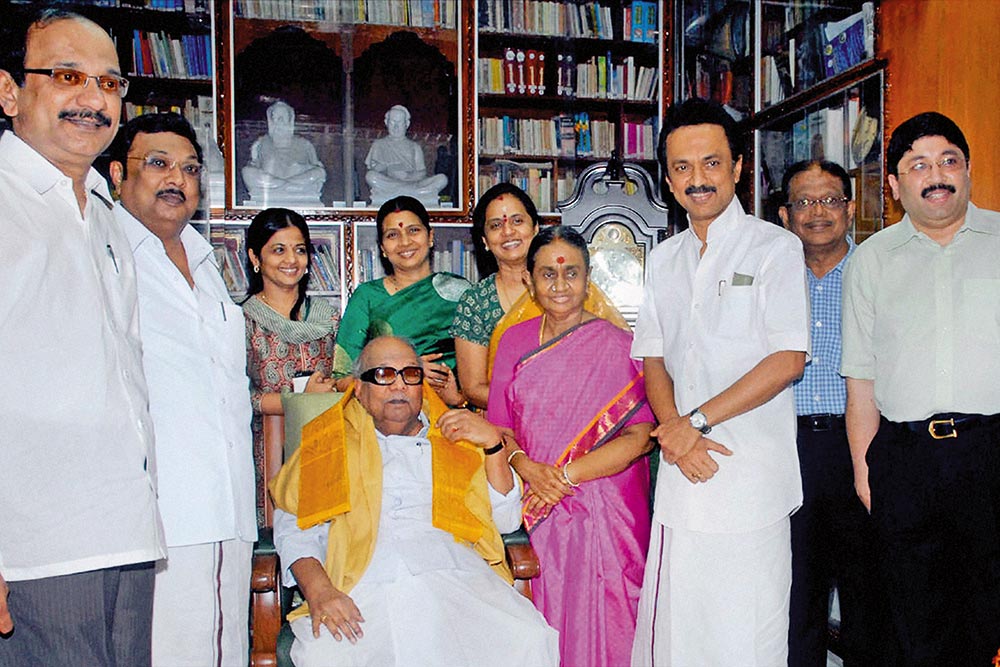 Karunanidhi with his wife, sons Stalin and Azhagiri and other family members

As a campaigner for social justice, Karunanidhi scored high marks compared to MGR or Jayalalitha even though they might have outdone him in welfare schemes.  Reserving seats for MBCs, creating a quota for rural students and first-time undergraduates, establishing Samathuvapuram, where the poor from different castes could live in a single colony, and training non-Brahmins as temple priests remain some of his achievements. “Karunanidhi was the first to provide a sub-quota for the Arundathiyar community, the poorest among the SCs. As a social reformer one can place him on a par with his mentor Periyar,” said VCK leader D. Ravikumar.

On the flip side, Karunanidhi was blamed for lifting prohibition and introducing liquor to an entire generation of Tamils. He had a typical justification for that as he asked, “How can Tamil Nadu remain a piece of unlit camphor surrounded by fire when other states around it do not have prohibition?” What seriously dented his image was the DMK’s track record on corruption, as his rule from 1971 to 1976 was blamed for institutionalising corruption in Tamil Nadu. The subsequent scams of his central ministers in the UPA government further sullied the DMK on the corruption front.

When Tamil Nadu’s political history is written, Karunanidhi will be recorded as a central character who determined its course of events over five long decades.  He donned many hats—literary figure, scriptwriter, speaker, social reformer, political leader and administrator. Yet, the long shadow that he cast on the state’s polity will remain Karunanidhi’s lasting legacy.

In the absence of Karunanidhi’s looming presence, the state’s political canvas could find itself repainted. Within the DMK, there was never any doubt as Stalin had been the chosen one to succeed his father. And though Stalin is positioned well to don the mantle it may not be such a smooth journey, say party insiders.

The temporary truce between him and his elder brother Azhagiri could be undone if the latter seeks his pound of flesh, now that the restraining presence of his father is not around. The Maran brothers, now facing a jail-threatening trial in the illegal telephone exchange scam, could seek some kind of protection through party posts and parliamentary tickets. Though, of late, Kanimozhi has thrown her lot with Stalin, her supporters want to see her as a Central minister for having seen prison in the 2G scam.

Karunanidhi’s absence can rewrite Tamil Nadu politics. His heir Stalin must be able to stem criticism, make viable alliances for 2019 and counter the challenge from new parties.

While the old patriarch could pacify the lot with a pat­ro­nising wave of his hand, Stalin cannot be expected to com­mand the same kind of authority or respect. Already, party functionaries fault him for failing to exploit the unrest wit­hin the AIADMK to unseat the EPS government and instal a DMK government in its place in spite of having 89 MLAs. “It is an open secret that Kalaignar would have achieved it in no time whereas Stalin could only give one deadline after another for the fall of the minority EPS government. He is yet to exhibit even a fraction of his father’s political acumen,” says Thuglak editor S. Gurumurthy.

Further, Stalin’s unabashed promotion of his actor-son Udhayanidhi has also not gone down well with his own loyalists. With no political experience whatsoever, Udhayanidhi’s sudden entry at party functions, combined with the overarching influence of Stalin’s son-in-law Sabareesan, has annoyed party seniors and middle-level functionaries.

So far, Stalin has managed to keep his allies intact, but trouble could erupt during seat sharing for the Lok Sabha elections. The Congress has already indicated that it would want 15 seats, whereas the DMK is unwilling to go beyond eight. To increase its bargaining clout with the DMK, Rahul Gandhi has met VCK leader Thriumavalavan and MNM leader Kamalahaasan in an attempt to forge a Congress-led clique. The Congress is also exploring ties with T.T.V. Dhinakaran’s newly-floated AMMK if the deal with the DMK fails.

Sensing the Congress’s game plan, Stalin has refused to endorse Rahul Gandhi as the prime ministerial candidate at this juncture, preferring to announce it before the Lok Sabha elections. In the absence of his father’s counsel, Stalin needs to tread carefully but confidently while dealing with allies. A failure on this front could create possibilities for the BJP gaining a toehold in Tamil Nadu.

The arrival of new players like Rajnikanth and Kamala­haasan has furthered queered the pitch. The two filmstars would not have pitched their political tent if Karuna­nidhi had been active and Jayalalitha had been around. Kamal has already laid claim to Karunanidhi’s rationalist followers with potshots at Brahmins and propagating his atheism. Without Karunanidhi, the anti-DMK votes many no longer gravitate towards a weakened AIADMK and could find new takers such as Rajnikanth or Dhinakaran.

As Tamil Nadu prepares for the 2019 Lok Sabha elections, probably a simultaneous election for the assembly as well, voters will be looking at a field minus their most seasoned political icon.