Karnataka bypolls are a matter of morale for the ruling coalition 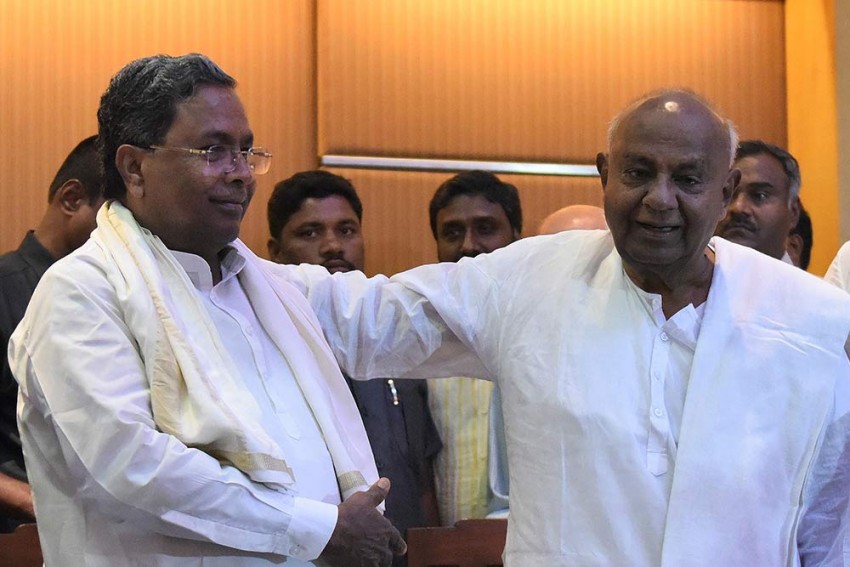 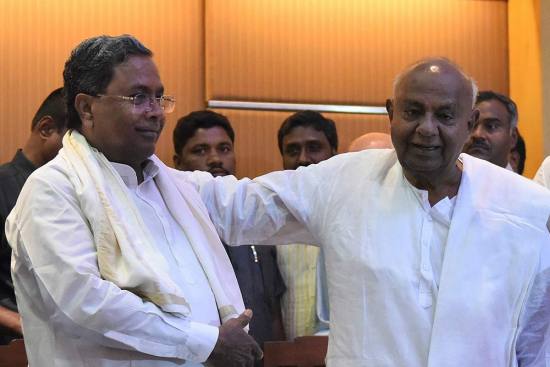 Last week, ahead of a round of bypolls, Karnataka witnessed a rare display of warm civility between old foes H.D. Deve Gowda and Siddaramaiah. The two veteran politicians, who fell out over a decade ago, sat together at a press conference, contemplating a way forward. Their immediate concern, of course, was to plan a strategy for the ruling Janata Dal (Secular)-Congress coalition aimed at the impending five by-elections on November 3.

“True, we have fought each other in the past but there’s a necessity to fight together now,” former Karnataka CM Siddaramaiah said at the press conference. “This will be a foundation for the (2019) Lok Sabha polls,” he said.  Deve Gowda, his one-time mentor, piped in: “We are starting afresh.”

The bypolls are for three Lok Sabha seats—Bellary, Shimoga and Mandya—vacated by B. Sreeramulu, B.S. Yeddyurappa (both BJP) and C.S. Puttaraju (a state minister from the JD-S) when they became MLAs in May. The rem­aining two bypolls are for assembly constituencies that have fallen vacant—Jamkhandi, whose representative Siddu Nyamagouda of the Congress died in a road accident, and Ramanagaram, the home turf of Karnataka chief minister H.D. Kumaraswamy, who had won from two seats in May.

By themselves, these polls aren’t critical—actually, most leaders weren’t ent­hused when the Lok Sabha byp­olls were announced, given that newly minted MPs would face polls again after a few months, at the general elections in 2019. But in Karnataka’s fluid political scenario, where the ruling coalition is constantly being tested, they hold out yet another test of endurance. Besides, there are the personal stakes for senior leaders.

It’s in this context that analysts read Congressman D.K. Shivakumar’s recent ‘personal’ adm­ission that his party had blundered on the Lingayat issue. The matter has been off the table since the May assembly elections and Shivakumar, a trouble-shooter who has rescued the Congress from many a sticky situation, surprised many with his comment at a public event. He had been a minister in the previous government led by Siddaramaiah when it hastily recommended  minority religion status for the Lingayats—the move was widely seen a bid to split the Lingayat-Veerashaiva community. Many reckon it contributed to the Congress’s reduced tally in May. In Karnataka Congress, where leaders compete fiercely with each other, the comments have raised speculation. Some feel Shivakumar is eyeing caste equations in the Bellary bypoll—he’s in charge of the district as minister—where the BJP’s Sreeramulu is a formidable rival. “They are devising local strategies, both Deve Gowda and Siddaramaiah, as well as Shivakumar,” reckons Narayana A., who teaches political science at the Azim Premji University. “They are all focussed on individual constituencies.”

In four out of five bypolls, past winners are striving to keep the seats in the family. Yeddyurappa’s son B.Y. Raghavendra is contesting the Shimoga seat his father vacated; Sreeramulu’s sister J. Shantha is standing from Bellary, Kum­araswamy’s wife, Anitha, is the coalition’s candidate for Ramanagaram and Nyamagouda’s son Anand is its candidate for Jamkhandi. Parties wouldn’t want this scenario to alter drastically because that would potentially hold out unexpected implications for the general elections, says Narayana.

For both the JD(S) and the Congress, south Karnataka is a tricky affair, because they have traditionally been rivals there, and the BJP hasn’t been able to make inroads so far. Their immediate challenge is to get ground workers of both parties together and deny the BJP a chance to step in. L.R. Shivaramegowda, a JD(S) leader, is the coalition candidate from Mandya. Winning the Mandya bypoll, and that too handsomely, therefore, is necessary for the JD(S), say analysts. That holds true for the BJP in Shimoga and Bellary too.

Over the past few months, the JD(S)-Congress coalition has weathered a few tempests in ts ranks while an eager BJP has been waiting in the wings. Much of it, says political commentator Narendar Pani, has been about individual leaders readying for the joust that is the general elections next year and thus setting the ground for it.

“If we come together, we will gain much more (voteshare) than what we got last time,” Deve Gowda told reporters, referring to the Lok Sabha elections. Together, the partners accounted for 55 per cent of votes in the assembly elections. The coalition has faced local-level polls since then, but these five by-elections, coming as a prelude of sorts to 2019, are important for morale. “This is the beginning of an indication to the entire country about the 2019 elections,” Deve Gowda said at the press conference. “If we win all five, it is going to send a message to the other states that are going to the polls.”