We were feverishly debating which gangland flick was worse - Musafir or Karam. That debate is still unresolved. 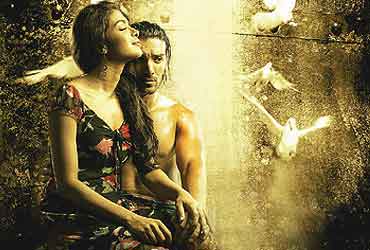 A few minutes into Karam I smsed a friend: "Not Bad". The story of a hitman seeking redemption seemed quite promising. However, by the end of the film I had to sheepishly go back on my words. In fact, we were feverishly debating which gangland flick was worse—Musafir or Karam. That debate is still unresolved but one can't help noticing how both the movies share a lot more in common than the quality (or the lack of it) dispute. The names of their directors, for instance, with Karam's filmmaker sporting a distinguishing "F" between the Sanjay and the Gupta. The two Sanjays also belong to much the same school of filmmaking, one which is about crime and the seedy megapolis underbelly, one in which morally-challenged men wear various kinds of bohemian hairdos, stubbles and a silly swagger and attitude to emphasise on their lack of morality. Both the films are high on style and low on substance, more a nod to the ubiquitous music videos and advertisements than an art form called cinema.

So we have a sexily unkempt grunge hitman (poker-faced John) who accidentally kills an innocent family which forces him to think of opting out. His wife (a huskily sad Priyanka), a night-club crooner (her anthem "Tinka tinka" is quite nice), too wants him to move on. But the bad boss Captain (Dhabolkar trying unsuccessfully to be a new-age Ajit aka Loin with a man-eating Alsatian and dumb bodyguards for company) won't let go so easily.

For all its fights and action, the film gets boring, the climax in particular is overdrawn. The humanising of the badman and his sense of loss and guilt is never able to reach out to the audience because instead of dwelling on his inner turmoil the film gets caught up with the many bullets and the buckets of blood. The b/w inserts, the grainy grey tones, the Tarantinoesque violence are a put-on, the noir element hugely contrived. The one thing which lingers on is the close-ups. The film is full of them. But more than being a canvas in which the actors should ideally be showing some emotions, the close-ups only become a display board for some makeup-resistant whiteheads and facial hair. Watch Karam only if you want to know the pores of John's skin better than your own.