The KSE was voted "best performing" for four years. Is it ready for the big league? 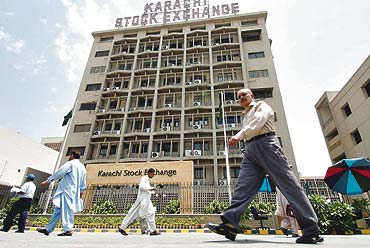 On the road where two of Karachi's tallest skyscrapers—the 26-storied Muslim Commercial Bank Towers and the 23-storied Habib Bank Plaza—are situated, adjoining the imposing headquarters of the city's police department and Pakistan's apex monetary authority, is a building that could pass off as a nondescript office. Except that this yellowish eight-floors-tall structure houses one of the fastest growing stock exchanges in the world. Every year, between 2002 and 2005, the Karachi stock exchange was adjudged the "best performing" market in the world in several surveys by internationally-reputed publications and agencies like Business Week and Bloomberg.

But the Karachi Stock Exchange (Guarantee) Ltd—to use the full, formal name of Pakistan's largest bourse—may lose its numero uno place in the current calendar year. As has happened in most emerging markets, including India, share indices at the KSE took a beating in recent months after touching a peak on April 17, 2006. On June 14, the KSE's 100-share index collapsed by 548 points, the biggest-ever single-day fall in the history of the exchange; newspapers described it as "doomsday" after the index fell to a level that had prevailed on December 30, 2005, wiping out nearly a year's gains. In three days in mid-June, the index crashed by over 10 per cent resulting in a loss of $16 billion in market capitalisation.