The day Pakistan had no answer to his pace 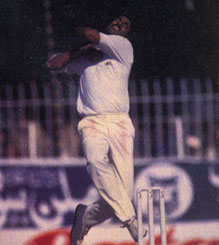 
Pakistan came to India in 1979-80 as favourites to win the six-Test series. Just a year earlier, their batsmen had mauled India's famed spin trio of Bedi, Chandrasekhar and Prasanna in a 2-0 series win in Pakistan. All three spinners had gone, and with Pakistan's batting line-up much the same, they were expected to have a run-feast against an inexperienced Indian attack.

The early indications that Pakistan might not have it all their way came in the second test at Delhi. Bowling with fire and hostility rarely associated with an Indian pace bowler, 21-year-old Kapil Dev took nine wickets in the drawn match. His five-for in the first innings helped India bowl Pakistan out for the first time since Test series between the two countries had resumed the previous year.

India's win in the third Test was largely fashioned by spin, but Kapil made the fifth Test at Madras his own. Asif Iqbal won the toss and elected to bat on a perfect batting wicket, but was soon ruing his decision. Kapil took four of the first five wickets, including those of Zaheer Abbas (for a duck) and Javed Miandad, as Pakistan were bowled out for 272. India's reply was built around a monumental 166 by Sunil Gavaskar he batted nearly 10 hours and faced 373 balls -but the impetus to the innings was  provided by Kapil. His 98 - ball 84 included 13 fours and a six, and was the only other score to top 50. India finished with 430 -a lead of 158. The pitch was still a beauty to bat on, and Pakistan through most of the five sessions of play left.

Kapil had other ideas. He had Sadiq Mohammad caught by Roger Binny for a second-ball duck and removed Mudassar Nazar to have Pakistan reeling at 17 for 2. Then, for the second time in the match he nailed Zaheer. Within 90 minutes of starting their second innings, Pakistan had slumped to 58 for 5 - Kapil, again, taking four of the wickets. It was a decisive spell of fast bowling, and suddenly, India had a chance of wrapping it up on the fourth day itself.

Some lower-order resistance enabled Pakistan to stretch it to the fifth day, but Kapil was not to be denied. He got rid of Imran Khan and the tail to finish with 7 for 56 (match figures of 11 for 146), as India romped home by 10 wickets and took an invincible 2-0 lead in the series. Kapil Dev had won India a famous victory.