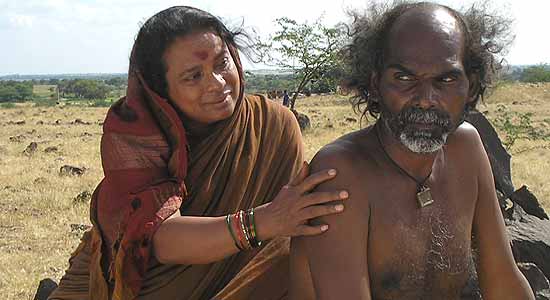 Girish Kasaravalli’s new film is about simple people, their simple lives, relationships and concerns. It’s a gentle, moving tale of a professional gravedigger’s loss of faith in the power of his dreams and how that shatters him to the core. Living on the fringes of society, literally, what keeps Irya (Biradar) going is the belief in himself—that he can foresee the future. Whenever he sees his guru, Siddha, in his dreams, someone in the village dies. Which, in turn, means that Irya has some work to earn a living from. It’s the death of others that keeps his and his wife Rudri’s (Umashree) life moving. However, one fine day, Irya is forced to question his power when one of his dreams doesn’t turn real. He assumes that ailing village elder Gowda has passed away. But he has not. Or has he? As Irya unknowingly gets caught between reality and illusion, he begins to disintegrate. What remains to be asked is whether his faith will be reaffirmed or not. Kasaravalli’s sharp eye sees the class politics, the morally decaying haves and the marginalised have-nots but he doesn’t overstress it nor does he turn overly didactic. He’s deft with his characterisation and the actors sink into their roles; it hardly seems as though they’re ‘acting’. The narrative is multi-layered but never obtuse or complicated. It’s the classic, rooted, humanist story-telling that has been the hallmark of erstwhile parallel cinema. KK grows on you with every viewing; the more you revisit it, the finer meanings you imbibe. Kasaravalli can make good cinema seem effortless.