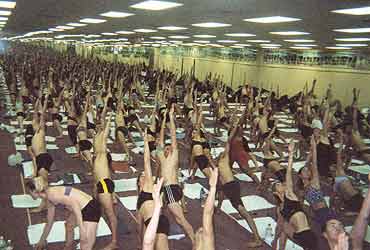 Yoga was supposed to change America, instead America seems to have changed it. The open commercialisation of a sacred exchange between a guru and disciples has led to allegations of scams and sexual misconduct, and angered the more serious students of yoga, inviting stinging comments about the whole business of selling spirituality like hamburgers.

The reasons are obvious. The American market for healthy, environment-friendly products and pursuits is worth $230 billion a year and growing. It was just a matter of time before businessmen spotted the ultimate mind medicine and marketed it with the vigour of Viagra. And ever since rock star Sting expounded in interviews on how yoga can enhance sexual pleasure, many more spiritually-hungry lined up looking for action, specially from anointed "stud muffins" like Rodney Yee whose toned body and outward calm seemed magnetic. The "new" spirituality hid within its multiple folds the lure of money and even the promise of a better time. Today it's a series of dogfights over marketshares, trademarked asanas and competitive advantage, with an estimated 15 million practitioners trying to soothe their bodies and souls with the yogic balm. Take your pick—a yoga weekend, yoga clothing, yoga videos, and lately even a yoga cruise.

Leading the brigade is Calcutta-born Bikram Choudhury, aka "yoga's bad boy", his juggernaut of yoga franchises unstoppable at 720 studios around the world and counting. With 600 of them in the US alone, he is ubiquitous. Ensconced in his Beverly Hills mansion and running a $7 million empire, he's the guru of Hollywood, counting among his students Shirley MacLaine, Candice Bergen, Salma Hayek, Madonna and Michael Jackson. He claims to have rejuvenated the careers of sportsmen like Kareem Abdul-Jabbar and John McEnroe. Part hyperbole and part braggadocio laced with a typical eastern disdain for the spiritual orphans he mentors, he says: "When in Rome, do as the Romans..." Sure, his disciples can teach his branded "Bikramyoga", but they must pay him first. Actually $5,000 to be exact for a 60-day boot camp where they memorise the postures and his dialogues verbatim. Groupies come from as far as Argentina and Hungary, dropping a $3 million into his coffers annually. Daily classes for ordinary folks are offered at $20 where as many as 100 students are packed inside an overheated room, sweaty and smelly, to do his unique "hot yoga".

"This is my intellectual property. I picked up 26 postures which work the whole body. I am the only man on this earth to teach yoga in a different form," he boasts on the telephone. "I was so tired of them stealing my techniques." He has now copyrighted his name, logo, clothing line and each word of his 90-minute lecture for the franchise. If it sounds too much like McDonald's, so be it.

But Bikram has also earned dubious credit for "saving" souls by other means. He has been accused of exploiting women students. When asked about the allegations, the Speedo-clad teacher did one better than Clinton. "I am attacked by women around the globe...presidents' daughters, princesses, Hollywood stars. American women have no self-control," he says without a hint of self-consciousness. "Two very famous women told me, 'Come home with me. If you don't, I'll kill myself.' I said go ahead. What am I supposed to do?" Saving women from themselves was something he did at a younger age when he had "27 of big Hollywood stars of the '70s in my class". Now, he says, "I'm sex-proof, media-proof, money-proof. Everybody knows I am superhuman. My spirit is cosmic consciousness."

Close by, in the Bay area, rules Rodney Yee, who learned at the feet of B.K.S. Iyengar, and is one of the "hottest yogis". He counts among the faithful one of America's most powerful personalities—talk show host Oprah Winfrey.Today he's one of the most sought-after teachers on the conference circuit. But there's a darker side—he is fighting a lawsuit by a former teacher at his Oakland studio who claimed that Yee unceremoniously threw her out when she confronted him about his alleged sexual liaisons.

Yee says it was just a "breach of contract" issue while refusing to counter her accusations. "Do you have 15 pages to write your story? Why should I even bother to answer anything when I know it will be distorted," he thunders on the phone. But another of Yee's former students, Athena Pappas, has been named in reports as saying publicly that she felt used by him during her relationship with the handsome teacher.

Sexual scandals are not new in American yoga. Debates have raged ever since some of Muktananda's disciples accused him of preying on young girls in the guise of mentoring them at his sprawling ashram in New York. He was allegedly shoring up his tantric and yogic powers. His successors—the brother-sister duo of Nityananda and Gurumayi—were embroiled in an ugly battle for control with the sister accusing Nityananda of having affairs with disciples, something he readily confessed to and apologised for. She herself has been accused of running the ashram as a Big Brother camp with her coterie watching and listening for voices of dissent. In 1994, Amrit Desai of the Kripalu Center for Yoga and Health in Massachusetts had to resign after at least three followers said he had affairs with them. Swami Rama, another prominent teacher, was sued by a woman who accused him of sexually assaulting her while she was a student at the Himalayan Institute of Honesdale in Pennsylvania. She won a $1.9-million judgement in 1997. Lest one forget, the gurus often make abstinence a requirement while on a yoga retreat.

If scandals darken the scene on one side, it is rapacious business practices on the other. John Abbot, a former Citicorp executive who runs the industry's most influential magazine, Yoga Journal, and surveys an empire of $11 million, has been accused of indulging in unfair trade practices by refusing ads to competitors and stealing clients. The policy has since been reversed by Abbot who believes you can't be completely "predatory" in the business. But a little, yes. Abbot bought Yoga Journal in 1998, turned it into a glossy, complete with supermodel Christy Turlington as the editor-at-large. Subscriptions shot up from a few thousand to 2,20,000. He used it to aggressively promote his yoga conferences, which tired, stiff-necked executives paid $850 to attend to recover their equilibrium and become "centred". Abbot's now booking seats for a yoga cruise to the Caribbean at $2,650 a person for February 2003.

In NY, the owners of Jivamukti Yoga Centre are upset that former students are giving them competition by opening their own schools next door. David Life and Sharon Gannon have been practising yoga for 17 years and claim their combination of postures is unique which they graciously share with 2,000 students a week, including a slew of celebrity clients. Ravi Shankar has endorsed their stunningly-produced book. Former students are expressly not allowed to use the word "Jivamukti" in anything they impart because it is "owned".

Then there are people who have turned the whole concept of yoga around, even mocking at its Indian origins. Baron Baptiste, a former student of Choudhury, teaches a rigorous "power yoga", designed to attract tough football types. He appeals to goal-obsessed Americans who want a "workout" but with a bit of peace of mind thrown in. So Baptiste censors the Sanskrit terms, excises any hint of chants or guru-shishya relationship. "The new yoga in America is a little bit more sane, a little bit more clean, a little bit more refined than what you get over in India," he claims.But critics say he's not teaching yoga, but dressed-up aerobics.

Profits and scandals are stealing the centre away from what yoga is supposed to be—about inner strength and quiet meditation. Many of these gurus wouldn't or can't sit in the lotus position for hours.