Karunanidhi finishes 50 years in politics. Who after him? Updates 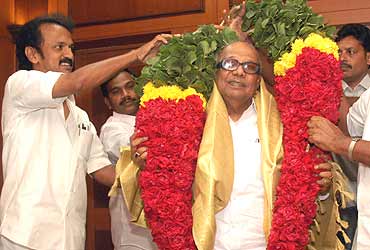 In sharp contrast, inner-party democracy within the Dravida Munnetra Kazhagam (DMK) is a sham. On the eve of the golden jubilee of Karunanidhi's first assembly speech, the battles within his family spilled on to the streets. On May 9, the Tamil daily Dinakaran, owned by the CM's grand-nephew Kalanidhi Maran, aired the findings of an opinion poll on who will be Karunanidhi's political heir. Seventy per cent respondents named the chief minister's son and local administration minister M.K. Stalin. Madurai-based M.K. Azhagiri, the DMK patriarch's elder son, polled 2 per cent. In reaction, Azhagiri's men set fire to the Madurai office of Dinakaran/Sun TV leading to the death of three employees. Karunanidhi's arch rival, AIADMK chief J. Jayalalitha, would be watching these developments with glee.

The battle for the DMK legacy has become purely a family issue. Karunanidhi has four sons and two daughters born over decades to three wives (two of them alive). Two sons and one daughter, poet M. Kanimozhi, are today in the fray to claim his political legacy. Kanimozhi's nascent political ambition is abetted by the intrigues between the Stalin and Maran factions.