One of the cleverest love triangles in Hindi cinema 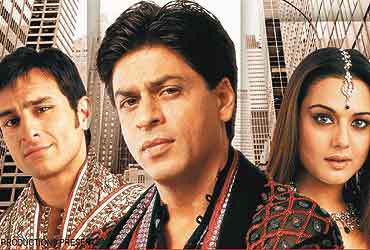 Plain Jane Naina (Preity) lives in the US with her widowed mother (Jaya, in western outfits), paternal grandmother (Sushma Seth) and two younger siblings. Naina is an introvert and cynical to the core and classmate Rohit (Saif) is her only close friend. Enter Aman (SRK), the new over-friendly neighbour, who endears himself to the entire family except, of course, Naina. However, even before she can realise it, her hatred for Aman turns into love. But wait, Aman is actually playing Cupid between Naina and Rohit. Clearly, life can't be so simple for the three.

The film's funny first half zips past so fast that you don't even get time to blink. Post-interval, the high drama does have its share of boring moments. But again, the final four reels are so emotionally engaging that they leave you in tears, literally. The film has SRK in one of the best roles of his career. It's a role any lesser actor could've easily gone overboard with. But SRK's sense of comic timing is so perfect that it could give his Omega watch a bit of a complex. Preity plays the girl torn between the two guys with understanding and maturity. Her transformation from an introvert to the exuberant extrovert is very credible. Saif proves yet again that he is an actor who needs to be taken seriously. He's a natural here and extremely endearing. Watch out for the perfect on-screen chemistry between the two Khans.

The music is not as melodious as k2h2 or k3g, but the title track and Pretty Woman are very hummable. America, captured by the camera of Anil Mehta, has never looked more beautiful in a Hindi film. But more than anything else, khnh is an excellent debut by director Nikhil Advani. The typical Karan Johar story gets an Advani stamp here with his unusual narrative style and fast cuts.

Finally, KHNH is a personal triumph for Johar, the writer. Although he finds inspiration in Safar, Anand and Bawarchi, Johar has packaged the drama so very contemporarily that the final product holds its own. Undoubtedly, khnh is one of the cleverest love triangles in Hindi cinema.