On his new film Boom 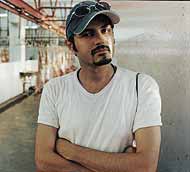 You were plagued by a number of problems?
None of them were of my making. Besides the most obvious ones, I had to deal with many unobvious ones too.

Do you think the loudly lascivious promos will go against the film?
I've had no control over the marketing and publicity. This strategy isn't helping my film one bit. The campaign I had designed was more subtle.

Fashion meets the underworld here.
Boom is really about fashion extortion. But people decided what it is about without seeing it.

Did Salman Rushdie give a written permission for Padma Lakshmi?
No, but I met him over dinner in New York.

Did he want to play Amitabh's role?
He loved the script but couldn't accompany us because we were shooting in Dubai.

Any criticism from him?
That there weren't enough of the girls. But I was interested in my gangsters than the girls.

How was it working with Amitabh?
He looks far sexier here than any of his films. It's always a pleasure to work with him. In one scene, Padma's crawling across an 80 ft long desk to seduce him. And he remains static. Only Amitabh could have pulled it off.

Any lessons learnt from Boom?
From now on, I'll produce my own films.

A Diplomat Who Sprints On Track